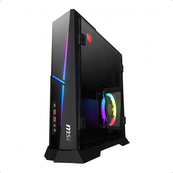 MSI Trident X review: It's easy to make a strong case for this gaming desktop Less power, less weight, less money could be just what competitive gamers are looking for

In Pictures: MSI show off their wares at PAX Australia 2018

MSI's Computex showcase was all about slimmer bezels and better form-factors. Here's a quick look at what they had to show off.

MSI always puts on an impressive Computex stand and this year was no different.