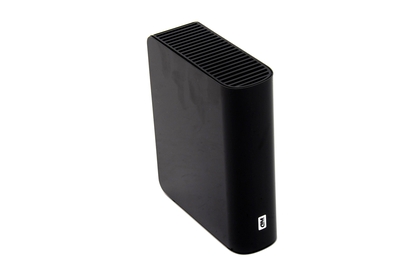 If you've been thinking about getting a hard drive for your smart TV, WD's My Book AV-TV should be considered highly. It has a 2TB capacity, and the company says it has under-the-hood optimisations for the workload that TV recordings can put on a hard drive. We can vouch for the fact that it worked very well in our tests with an LG smart TV.

Most smart TVs in the Australian and New Zealand markets have the ability to take advantage of USB storage for time-shifting and recording. WD's My Book AV-TV is a hard drive that is specifically designed to be the storage space for these TVs, allowing them to be turned into personal video recorders (PVRs) quite easily.

The AV-TV looks just like any other single-drive My Book drive in WD's stable of external USB products, but it has some slight differences that make it better suited to being plugged in to your TV than a regular external PC hard drive. WD says that it's designed for 24x7 usage, which comes in handy when you want to record and playback many hours of TV per day; it also has advanced algorithms that allow for more sequential recording of data (rather than storing data in first-available, all-over-the-place spots like a regular PC hard drive), and it has more advanced error-correction techniques for smoother playback.

You get a 2TB drive that offers a formatted capacity of 1837GB (that's what was reported on our test TV) and this supports well over 200 hours of HD recording. The WD drive doesn't come with any interface software; the interface for the hard drive will be the interface that's supplied by your TV. We used an LG 32LM6410 smart TV for our tests, and this has a sparse PVR interface that simply shows recorded programs and allows you to either play them or delete them. When you start playing a file, you also have the ability to trim it. Again, what features are available to you will depend on your TV.

We recorded and played back many hours of TV using the My Book AV-TV, and also make extensive use of time-shifting (which was enabled by default as soon as we plugged in the drive to our TV). It didn't miss a beat. Programs played smoothly and with no discernible quality loss. That said, you probably won't notice any performance difference between this and other drives unless you've previously been using a particularly clunky old drive with your TV.

Setting up the drive was a simple affair. Physically, all we had to do was plug in the USB 3.0 cable (which is supplied in the box) and switch on the power (it comes with a wall wart-style adapter). The only other step was to prepare the hard drive for use with our TV — the TV prompted us to format the drive, which the TV then took care of in a few seconds.

It's important to note then when you format the drive for use with your TV, the chances are that you won't be able to use that drive on another TV without formatting it again, nor on a desktop PC. We couldn't use the drive when we plugged it in to our desktop PC after using it on the TV. This is due to digital rights management for the most part, so you can't just go sharing all the content that you record.

While the WD My Book AV-TV does a good job of turning a digital TV into a PVR, it doesn't supply all of the advantages of a dedicated PVR. For example, your TV may only have one digital tuner built in, whereas a digital PVR will have two. This means that when you record with the AV-TV drive, you can't watch a different channel at the same time. (You can watch a recorded program, through, while recording at the same time, if your TV supports it). It's worth noting that if your TV does have two tuners built-in, the drive will be capable of recording two HD streams.

Your TV may also not have the ability to record while it's switched off. Ours did, though, and we were able to easily schedule recordings for late at night and then switch off the TV. If you're watching TV and have scheduled some recordings using your TV's EPG, then you will be asked if you would like to proceed with the recording (it asks you because the channel will be switched if you're recording won't be made on the current channel you're watching).

The drive can be placed upright or flat next to your TV (it actually comes with little rubber stops that you can attach if you want use it in the latter position), and it's a passively cooled drive, meaning there is no fan inside the case. There are plenty of air vents along the side and at the back to allow warm air to escape. The drive shouldn't get too hot, though, as it's one of WD's Green models, which has a relatively slow spin speed. The only noise you'll hear from the drive is some spinning when it starts and stops, and some seeking when the heads are reading or writing data, but you'll only hear that if you're sitting close to the drive.

There is one status light and this can be a little irritating with its flashing, especially if you don't have any other lights around your TV. The good thing is you can just place the WD drive well out of the way, or even behind the TV, as there is no requirement for it to be within your line of sight. There is a power button on it if you want to switch it off when you know you won't be using it, but it also powers off when the TV is switched off.

It's a good little drive all up, and it can make the decision of what type of drive to buy for your TV a little easier, being that it's designed for a PVR application. WD has even modified the look of its retail packages so that you can clearly make out this drive on the shelf and differentiate from its desktop products (the AV-TV has a grey and red box compared to grey and green for a desktop drive, for example). With a recommended retail price of $179, its formatted cost per gigabyte is 9.7 cents. If you're in New Zealand, the cost is $229, or 12.4 cents per formatted gigabyte. There's a 1TB version, too, that's $30 cheaper in Australia ($139) and $50 cheaper in New Zealand ($179).

Visit WD's Web site to see which smart TV brands are compatible with the drive.