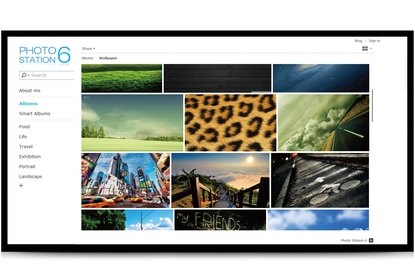 Synology's DSM 4.3 software upgrade will be available within the next couple of weeks for compatible NAS devices. Existing features have been polished or given added capabilities, and there are more business features for enterprise users to implement, too.

Synology has announced that an upgrade to the DiskStation Manager (DSM) software for its NAS (network attached storage) devices will be forthcoming in the next couple of weeks. The new software, which will be DSM version 4.3, has been in public beta since 9 July. The release version will be available for download in either the last week of August or the first week of September.

The new version of the software was shown off in a launch event in Sydney yesterday, and the highlights include more polished interfaces for some of its consumer media features, improved file sharing and cloud features, enhanced enterprise business features, and more efficient solid state drive (SSD) support. Here’s what we know so far.

The Cloud Station app in 4.3, which is basically akin to a private version of Dropbox because all the data you store is on your own hard drives on your NAS device, gets a few improvements in the way it handles the synchronisation and the versioning of files. The Cloud Station app now gives you more control over what files and folders you want to synchronise, and you can even filter synchronisation according to file types.

Different versions of files are now handled in a way so that only changed data blocks are synchronised, rather than entire files, which should lead to more efficient synchronisation — Synology claims up to 30 per cent faster upload speeds. There is also better reporting of what’s going on in the background, and more notifications are now available. A new Linux client has been added to the mix, too.

File Station also gets a few improvements over the version that was found in DSM 4.2. Mainly, the interface now allows you to set different thumbnail sizes (small, medium and large) for easier navigation. There is improved link sharing for folders, and security for shared links can be added in the form of password protection and link expiry dates. If you use the Chrome browser, File Station now supports drag-and-drop operations to and from the Desktop, which can make it easier to manage your data.

The built-in photo manager, Photo Station 6, has been given a facelift, and it now looks reminiscent of the Flickr interface insofar as it shows you a wall of pictures that are re-sized to fit the width of the screen. It’s an elegant design that scrolled very smoothly in the brief hands-on that we had with this particular feature, though the endless scrolling can be an annoyance (it can display up to 1000 photos without you having to click on a second page). There is also a timeline view.

It’s easy to categorise and tag photos in the new interface, and you can add info to an ‘about me’ page, all of which is said to come in handy for photographers who wish to use this platform as a display interface for their clients. The Aviary editor is built in, which allows for simple and fun photo manipulation (we use this editor in Flickr, which is how we know it can be fun to use), and Synology claims that photos can be quite easily uploaded to social media sites from within the Photo Station 6 interface.

Synology has also updated the Video Station app, allowing you to create libraries and set permissions for them, and the DS Audio iOS app now has a brand new interface. It supports album art and lyrics, and you can create and manage playlists on-the-fly within the app.

Support has been added for DVB-S (satellite) USB tuners (this is in addition to DVB-T support), and as long as you use a compatible third-party USB tuner, you will be able to not only watch and record programs, but also stream live TV to your mobile devices.

Apps for Windows Phone 7 and 8 are available, and these allow you to access and manage files on your DiskStation NAS from within the Windows Phone environment.

In addition to the new File Station and Cloud Station features, here are some of the more business-centric features that have been added to DSM 4.3.

The mail server now includes anti-virus and spam filters (using ClamAV), in addition to the implementation of blacklists and whitelists.

Virtual private networks (VPN) can now be more secure thanks to the implementation of L2TP over IPSec, which ensures that the sender and receiver are both who they say they are.

There is also better bandwidth management for individual users or entire groups, so you can provision speed based on the time and according to tasks — for example, user group speeds can be lowered at times when you want more bandwidth to be dedicated to backup services.

Businesses that use Google services can now make use of LDAP (Lightweight Directory Access Protocol) to allow their users to log in to Gmail and Docs, for example, through a single company account.

SSD performance has been improved in DSM 4.3, which now supports TRIM. This means that re-write operations are improved because any deleted data is cleaned off the drive in the background. Any data that is to be written to the drive doesn’t have to wait for space to be cleaned first in order to be stored — the deleted data will have already been dealt with and the space will have already been cleared for the new data, therefore improving the I/O performance of the NAS.

DSM 4.3 also supports a feature called ODX (Offloaded Data Transfer) on Windows Server 2012. This is said to free up CPU time on the server when moving data because that data doesn’t need to be buffered. It can provide a significant speed boost for tasks such as data migration. Synology claims that this feature of DSM 4.3 is unique in the storage market because it supports Single Host Multi Storage and Multi Host Multi Storage scenarios.

There a few other new features in DSM 4.3 (such as improved link aggregation and VLAN support), but these are the main things that were covered by Synology in the launch of the system in Sydney.

If you have a compatible Synology NAS device, then you can try it out for yourself once it’s released in the next couple of weeks.