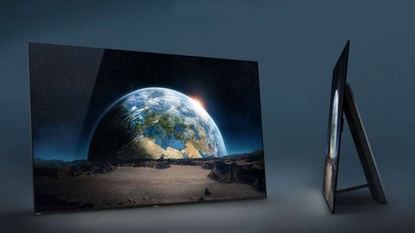 Stunning picture quality, like all OLEDs, but price-conscious shoppers need to decide whether it's worth paying a premium for Sony's design.

Vying for a slice of the Ultra HD OLED pie, Sony has put forward a mouth-watering television to rival LG and Panasonic.

LG has had the Australian OLED market to itself for several years, offering the best in home entertainment picture quality, but in the space of a few months rivals Panasonic and now Sony are chasing a slice of the action.
Sony's top-shelf Full Array LED-backlit LCD televisions were the closest rival to LG's OLED picture quality, so Sony's local OLED debut is certainly worth a look if you're after a taste of OLED in your lounge room.

These days large televisions aim for slender and elegant designs, making the most of super-thin panels, but Sony has bucked the trend with the 55-inch (AU$4999) and 65-inch (AU$7499) A1 OLED. It's opted for bold monolithic aesthetics, not just to make a statement but also for functional reasons to meet some of its design goals.

The bottom of the screen rests directly on the benchtop, leaning back on a slight five-degree angle and held upright by an easel-style kickstand which gives the television a rather large footprint. Alternatively you can wall-mount the television, although the screen won't sit flush.

With the television sitting on a cabinet the stand is hidden so from directly in front you can see nothing but screen, surrounded by a slim jet-black bezel barely a centimetre thick. There's no room for a soundbar or anything else to sit below or in front of the screen, although Sony would argue you don't need one.

From side on the television looks much less elegant than its slender rivals, thanks to the hefty kickstand and a crossbeam running right across the back of the screen. It's not just about structural integrity, that crossbeam actually contains four drivers which turn the entire screen into a giant speaker. There's also a backwards-facing subwoofer built into the stand.

The bold design won't suit everyone, but Sony's outstanding OLED picture quality will please even the most discerning of viewers.

As with any OLED, forget Standard picture mode and use Cinema Home as your starting point, then tweak to taste. Thankfully you don't need to do much although you might bump up the colours a notch for blockbuster movies, especially if you're a fan of LED's vibrant colours.

To be honest nothing separates Sony, LG and Panasonic OLEDs in terms of brightness and contrast, which isn't surprising considering they all buy their panels from LG Display. You'll see outstanding detail in even the deepest of shadows, along with fine detail in the brightest whites rather than completely blowing out.

OLED makes for a phenomenal movie night television, but thankfully it's also cranked up the brightness in the last few years so it can hold its head high in a brightly lit room. This is where you'll benefit from Sony's anti-reflective coating to reduce screen glare. LG offers a similar filter on all its OLEDs while Panasonic frustratingly reserves it for its top shelf model.

As you'd expect, Sony's OLED easily handles the demands of High Dynamic Range content. Like LG, it offers the benefit of supporting both HDR10 and Dolby Vision – an advanced HDR format which optimises the picture quality for each scene in a movie. For now you'll only find Dolby Vision on a handful of Netflix titles, it's coming to Ultra HD Blu-ray discs this year – if you have a compatible player.
It remains to be seen whether Dolby Vision support gives LG and Sony an advantage over their rivals, although it's worth noting that it requires a Dolby Vision chip and can't simply be retro-fitted with a firmware update down the track if Panasonic decides to get onboard. Meanwhile Samsung and Amazon are pushing their rival HDR10+ format but they've given Dolby Vision a considerable head start.

While they use the same OLED panels, each television maker brings its own video processing to the table. The differences are subtle and show through when watching upscaled content rather than pristine Ultra HD Blu-ray movies.

A few years ago every television maker seemed to insist on shipping with heavy-handed default video processing which strove to look vibrant rather than lifelike. While it might appeal to schmucks who buy televisions by the inch, viewers with an eye for detail were forced to wrestle with the advanced settings in pursuit of a decent picture.

Sony was certainly guilty of this – its "Reality Creation" and MotionFlow motion interpolation settings sometimes created more problems than they solved – but thankfully the A1 OLED is much easier to tame.

Cinema Home mode keeps the video processing nicely in check, eliminating unsightly tearing and jitter, although you can still tweak all the settings to taste even when watching HDR content.

The television offers excellent upscaling from Blu-ray along with HD Foxtel and broadband content, plus it even does a decent job with Australia's woeful standard-def free-to-air channels. Of course it's assisted by OLED's elimination of motion blur, which helps when watching fast-moving action.

Turning the entire screen into a giant speaker seems like a risky move but the results are surprisingly good, with impressive high-end and mid-range fidelity. You also get decent stereo separation and a nice wide soundstage.

Read more Everything you need to know about HDR TVs

Unfortunately the sound is let down but the disappointing subwoofer built into the back of the kickstand. It's fine for everyday viewing but come movie night it's found wanting, lacking punch in the explosions and leaving fat soundtracks lost in the ambient noise. Even the high and mid-range gets a little harsh when you pump up the volume for an action movie.

To be fair if you're willing to drop this kind of cash on a television then it'll probably be accompanied by a decent surround sound system or high-end sound bar with a standalone subwoofer. If that's the case you could opt for an entry-level LG or Panasonic and save almost $1000 which you could put towards a sound system.

It's often easier to let your set-top boxes and handheld gadgets do the heavy lifting when it comes to smart TV features, but Sony's excellent Android TV implementation will seal the deal for some viewers – especially in Android/Google-centric homes. The television ships running Android 7.0 Nougat, but Sony says an Android O update will come.

You're limited to the Android TV section of the Google Play app store, but in return you still get a wider range of apps than most smart TV platforms along with a smooth user experience. The television also appears on your home network as a Chromecast streaming point.

Android TV is not for everyone – LG's user-friendly webOS will still win favour in some lounge rooms, especially with its wand-like magic remote – but if you appreciate the power of Android then the A1 might be the OLED you've been waiting for.

With the A1 Sony has delivered the stunning picture quality that we've come to expect from Ultra HD OLED. If you're only chasing picture quality then you'll find cheaper entry-level OLEDs elsewhere, but if the A1's bold design, impressive audio and slick Android TV implementation win your favour then this might be the right slice of Ultra HD goodness for your lounge room.