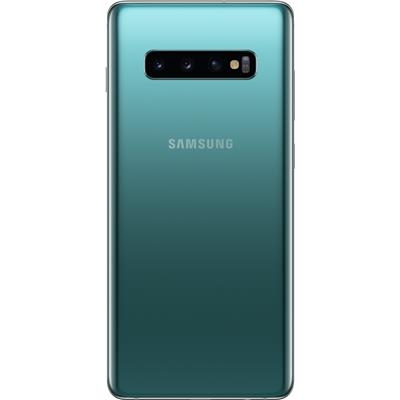 Samsung have put more into it - and you’ll get more out of it.

Camera - How Does The Galaxy S10+ Compare To The Competition?

Again, there’s not a huge amount of difference between the primary camera on the S10 and S10+. Both devices feature triple-lens arrays that bring together an ultra-wide, standard and telephoto lens in a conventional, albeit impressive, fashion.

Daylight shots look nice. Low-light shots could look better but still outclass the majority of other smartphone cameras out there.

The Live Focus bokeh shots the S10+ is able to shoot still lean towards skin-smoothing in a way that’s sometimes a little too noticeable for my liking - but I suspect that’s very much a personal preference thing.

While the camera on the S10+ shares many of the same weaknesses as its more-compact counterpart, the software experience retains many of its strengths. I’ve said it before and I’ll say it again: the new One UI interface that ships with the S10 resets this status quo for what a Samsung phone feels like to use in the best possible way.

One UI makes a great first impression, and things only get better from there. It’s responsive, it’s intuitive, it’s visually clean and deceptively practical. All of Samsung's native apps - plus the majority of Android UI elements - have been modified to privilege the lower half of the screen, which makes interacting with them faster, easier and more ergonomic. I wish every Android phone out there felt this good to use from moment-to-moment.

The one caveat here is the gesture controls. I kinda love that Samsung are finally moving away from the generic navigation bar but the real world results leave much to be desired. The gesture navigation here isn’t as intuitive as it ought to be and it represents a clear weak-link in the overall One UI experience.

It is worth noting here that the Australian version of the device is kitted out with Samsung’s Exynos processor rather than the Snapdragon 845 found in the US version of the phone. I suspect this to be a major factor for why the S10+ performed as it did when it came to benchmarks. Regardless, it is a shortcoming worth documenting.

The battery life of the S10+ provided a significant improvement over the regular S10. It’s not quite at the level of Huawei’s effortless two-day battery life - but it’s a solid step in the right direction.

In terms of everyday battery-life, we’d easily make it through the usual 9-5 work day and often well into the evening as well. We’d still have to charge our device back to full overnight - but if we accidentally forgot to do, we’d usually still have a little bit to go on until we found a power source. We’re talking eleven or twelve hours of average use here, though - as always - your mileage may vary.

Did they finally make Bixby better?

Yes! Sort of. The version of Samsung’s smart assistant Bixby you’ll find in the Galaxy S10+ is better than the version that shipped with the Galaxy S9+ but it still lags behind the competition in versatility, reliability and overall usability.

I will say that Samsung's interface when it comes to Bixby Routines is impressively robust. You've got a lot of freedom when it comes to specifying what you do, so long as what you do falls within the purview of Samsung's own app library. I really wish the third-party integration here went beyond Foursquare, Flipboard and Uber.

I’d ask it for the news, it’d give me the weather. It’s not great for requesting music over streaming services like Google Play Music, though it does work with locally stored music via Samsung’s own Music app. It’s decent for checking your calendar. You can’t order a pizza using your voice. It can pull up movie screen-times - but it uses Google to do so, and doesn’t read the times aloud. It doesn’t have the depth of cooking instructions that the Google Assistant has, nor the wealth of third-party Skills that Alexa does. Still, I did find Bixby surprisingly adept at Q&A - even if it is often susceptible to false positives (where it thinks you’re asking for it to interface with another app or plugin).

If anything, the main drawback that I’m caught up on is the lack of any sort of killer app or use case for Bixby. There’s still not really a reason to opt for it over the other options.

The Galaxy S10+ doesn’t fix any of the more fundamental shortcomings of the Galaxy S10. If anything, it makes a lot of the same mistakes. However, all the same, it’s by far the better device. The extra RAM, battery life and screen-size give it more room to make those mistakes and, eventually, these small details add up in its favor.

It’s just as experimental and messy as its compact counterpart but the Galaxy S10+ is the bigger, better and bolder buy.