LaunchBar review: Launch Mac apps with the power of thought

LaunchBar puts apps, music, calculations, search, Google results, clipboards, and much of the Finder into a single versatile bar. LaunchBar supercharges access to your Mac by removing the friction from a large number of common activities.

Nearly the first app I install on any new Mac is LaunchBar. It's the bootstrap I need for everything else. LaunchBar offers universal access to everything on your Mac that can be indexed, searched, launched, viewed, or opened. In one light, think of it as a souped-up Spotlight. But it's much more than that. 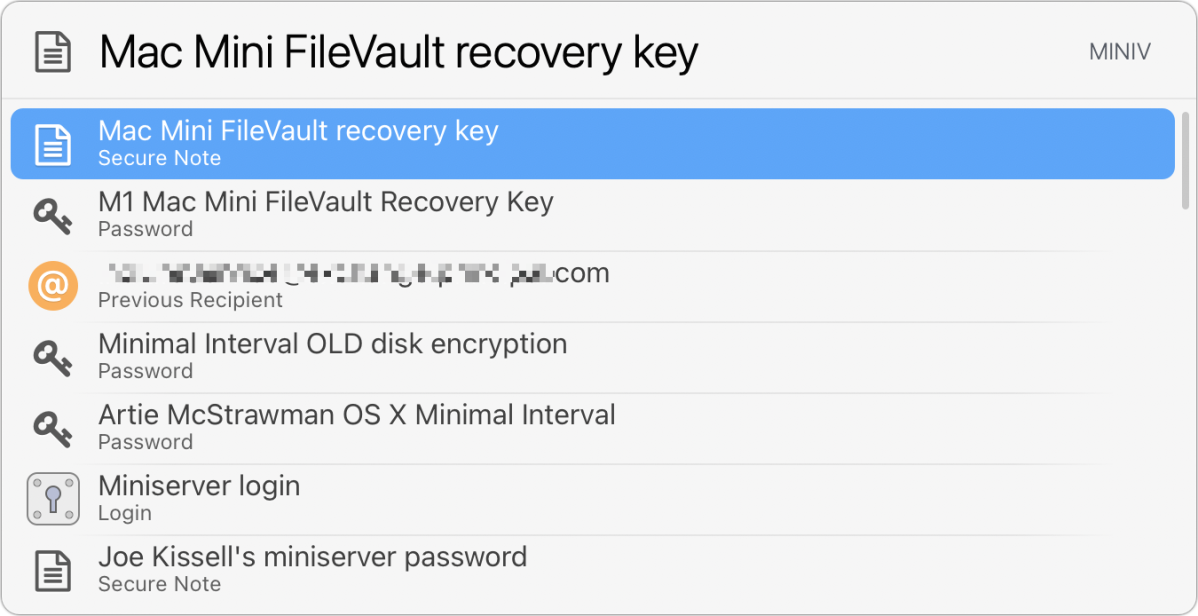 Invoke LaunchBar and start typing to bring up matches across all enabled categories.

At its heart, it's a quick way to launch an app. But that heart is wrapped in a full body of other features, maturing over two decades on the Mac platform. (LaunchBar's origins date to 1995 in NeXTSTEP; it first appeared in Mac OS X in 2001.)

What do I spend most of my time doing with it? I invoke it with a keyboard shortcut, type the first letter or two of an app, and view a list of best matches. LaunchBar puts my most frequently launched, viewed, or opened items at the top, so what I want is almost always the first item shown. I press Return, and the app launches, music plays, or an item (like an emoji) is inserted into text.

While Spotlight can accomplish some of LaunchBar's tasks and includes others Apple thinks are necessary and you may not, LaunchBar is rapid and shapes itself to your behavior. It also makes it a snap to customize what categories it draws from to return as results and add more.

You can also drill down into details for an item by pressing the right-arrow key for almost any match. LaunchBar displays more information about contacts, exposes the innards of an application package, plops you into a file directory's contents, or just provides its reasons for why you're seeing that result.

New users to LaunchBar should start with the LaunchBar Index, accessible via Index Show Index. A list scrolling down the left-hand side shows everything LaunchBar takes into account when you type into its bar. Sometimes that can be too much for your needs. I continue to tweak this list over time, particularly as the developer adds and improves it.

For instance, you might want to avoid Calendar entries, Safari Bookmarks, and songs in your Music library from matching. You can Control-click any item in the list and choose Disable to remove it from the index. Many items allow you to customize them. If you never want certain apps to appear as matches, use the Applications index item to uncheck the ones you wanted omitted. The Option view in nearly all items lets you customize results even further. 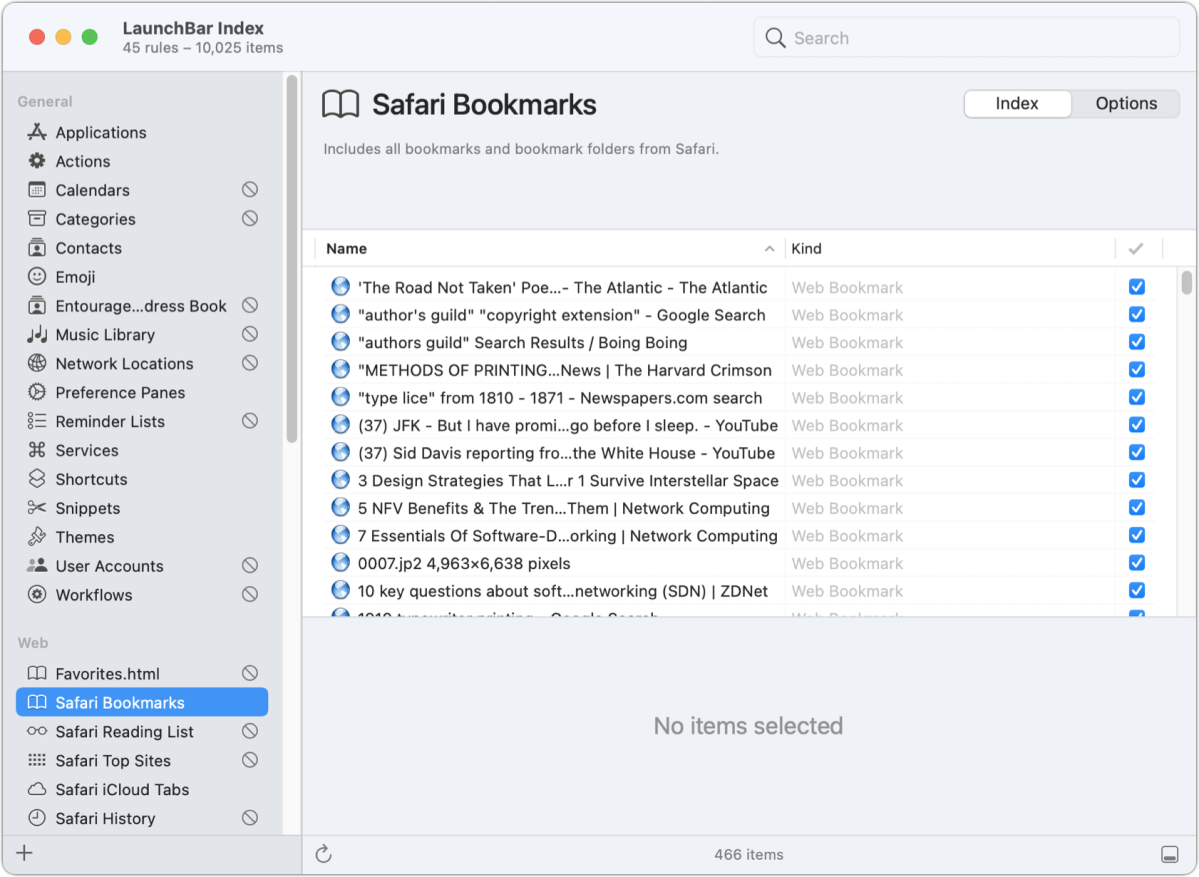 LaunchBar lets you control and customize everything that appears in each of its index categories. Here I can see a list of all my Safari bookmarks.

While launching items from a bar might be LaunchBar's reason to be, it also has a host of other features, accruing them like many favorite utilities previously reviewed in Mac Gems. A built-in Clipboard manager might help you maintain history if you don't need the full power of a standalone program like PasteBot. With 1Password integration, you can get matching login and other entries to show in the results list. 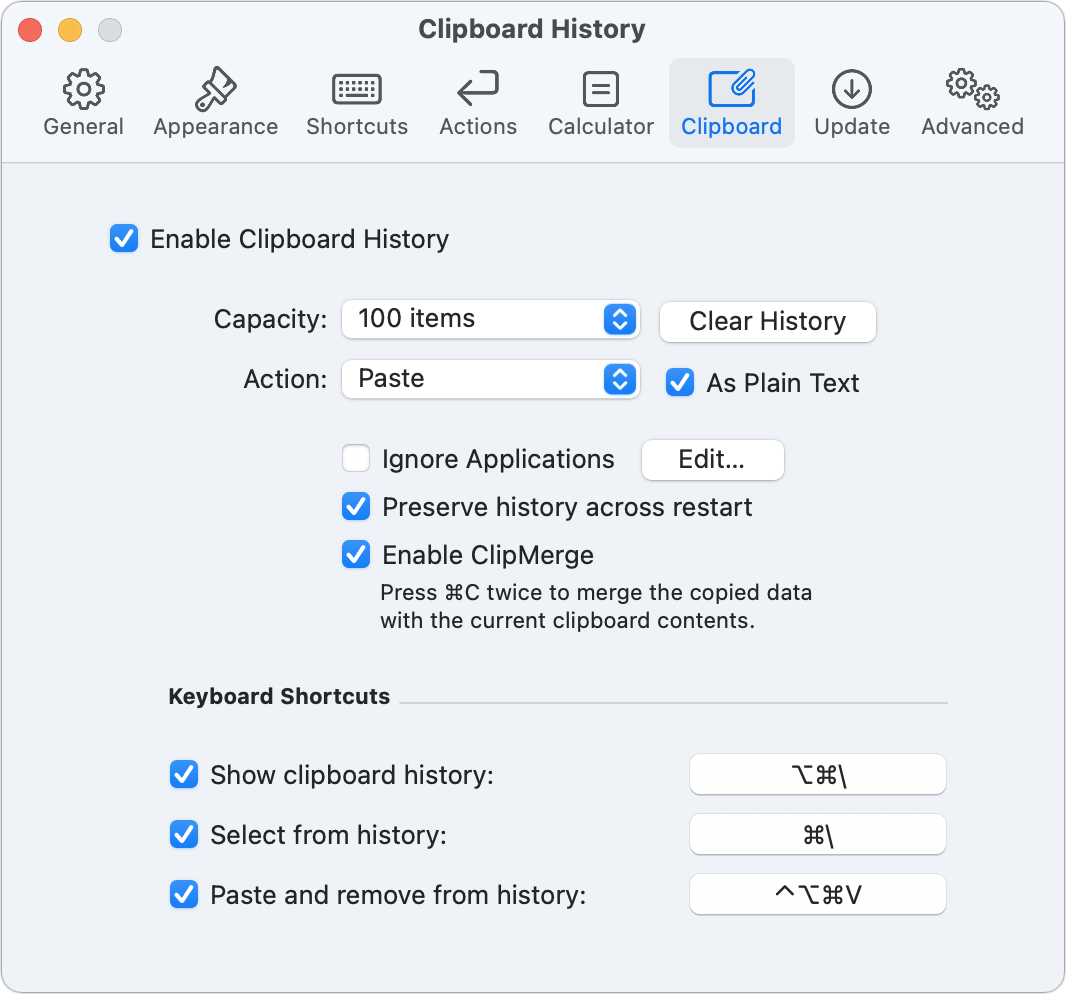 Need a Clipboard history and other related tools? LaunchBar's there for you.

LaunchBar can also act as a calculator, insert snippets (a la a stripped-down TextExpander), perform live web searches, run a number of provided actions (like converting case or quitting all applications), and drop in emoji. Control-click a match and a long list of Finder and other contextual items appear to act upon the selection. If that isn't enough, it can be extended further with AppleScript or other scripting languages.

Don't let the version number fool you: version 6.15 isn't 6.1.5 rather, it's fifteen interim releases since 6.0 appeared in 2014. Almost every dot release added a new feature or increased scope. Version 6.15 now supports Shortcuts in Monterey and searching images on Giphy.

LaunchBar offers a full-featured 30-day trial, after which it can continue to be used at no cost. The difference between free and a US$29 (AU$40) single-user or $49 (AU$67) family license? Let's call it take-a-break-ware: you're reminded from time to time to take a brief work pause in the free version before you use LaunchBar again. LaunchBar 6.15 requires macOS 10.14.6 Mojave or later; older versions remain available.

LaunchBar supercharges access to your Mac by removing the friction from a large number of common activities. As fast as you can think it, you can type a few characters and trigger exactly what you want to happen or leap to where you want to be. It should be in the core set of utility apps installed for nearly all Mac users.

Macworld reviewed LaunchBar 6.0 in 2014, noting how it becomes part of muscle memory: I rarely have to stop my train of thought to think about navigating my computer.

With the strong resurgence of the Mac in recent years, we want to celebrate the tools we use and that readers recommend to make the most of your macOS experience. Mac Gems highlights great nuggets of Mac software, apps that have a high utility, have a sharp focus on a limited set of problems to solve, and are generally developed by an individual or small company. Stay tuned for weekly updates, and send your suggestions to the Mac Gems Twitter feed (@macgems).