This Bluetooth keyboard folio is specifically designed to work with Samsung's Galaxy Tab 3 10.1 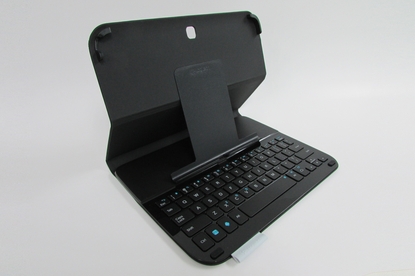 The best (and only) keyboard we’ve seen for the Samsung Galaxy Tab 3 10.1.

While iPad owners are treated to a plethora of third-party accessories, very few tablets of the Android or Windows variety are accessorised by anyone but their own manufacturers, if at all. It’s probably a sign of the Samsung Galaxy Tab’s success, then, that purveyor of peripherals Logitech has released a third-party keyboard cover for the Galaxy Tab 3 10.1.

The Logitech Ultrathin Keyboard Folio S310 (we’re guessing the ‘310’ is in reference to the Tab’s own model number), has one of those names that describes almost everything important about it. It’s a fairly thin folio case that has a keyboard built in. Voila. The only way Logitech could have been more descriptive would have been to call it the ‘Logitech Ultrathin Rechargeable Bluetooth Keyboard Folio for Samsung Galaxy Tab 3 10.1’. We’re not sure why they didn’t – it’s quite the catchy name, don’t you think?

Let’s start with the ‘keyboard’ bit, because that’s the only reason you’d buy this thing. If you just wanted a nice sturdy folio case for your Galaxy Tab, Logitech sells the same thing without the keyboard for NZ$80, instead of the NZ$130 this’ll set you back. If you don’t care about the little ‘Logitech’ tag, I’m sure you could find a generic 10.1-inch tablet case for a whole lot less again.

So, keyboard. It’s sports island keys with slightly rounded corners, decent separation between keys, and is roughly 80% the width and diagonal size of a full-sized desktop keyboard. Keys have a nice clear ‘click’ on activation, but travel is decidedly shallow. It’s a little hard on the fingers when you’re typing at speed and/or with the force of an enraged 4chan poster, but you can’t really have a nice long keystroke and an ‘ultrathin’ build in the same product. Not without messing with spacetime, anyway.

Despite the finger-bruisingly short travel, you can get up to a good speed on the S310. I’m an unabashed eight-finger typist, with an average speed of around 106 words per minute on a full-sized keyboard (115 peak uncaffeinated). On my first day with the S310, I averaged 101wpm – just six words less than my usual average for a desktop PC – and peaked at 116, one lucky word higher than the day’s desktop results.

What does all that mean? Well, Logitech’s keyboard is worth its salt, as it lets you type far faster than you could hope to manage with the on-screen keyboard (unless you are some sort of wizard). Considering it let me type almost at desktop-speed, it ranks very highly among the many tablet and netbook keyboards I’ve tested in the past. There’s also not much of a learning curve, considering I was up to full speed within less than an hour.

The keyboard connects to the Galaxy Tab via Bluetooth, and has its own internal rechargeable battery that charges via a standard micro USB cable. The cable is included in the box, but a mains charger is not. One from your smartphone or from the tablet itself will work just fine. Logitech advertises a battery life of up to three months, at an average of two hours’ use per day. We didn’t have three months or 180 hours, but we only had to charge the keyboard once, at the beginning of our testing.

The folio attaches to the Galaxy Tab 3 with Logitech’s “SecureLock System”, which is a very fancy name for two plastic corners at the top and a plastic bar at the bottom that snap into place around the tablet. The Tab never dislodged accidentally whilst we were using it, and the arrangement does feel very… well, ‘secure’. Much more so than Logitech’s magnetically-affixed iPad keyboards, which tend to fall off at the slightest provocation.

Magnets are used to to hold the folio closed, and to keep it upright in ‘laptop’ position for typing. In both of these cases, the magnets are strong enough to hold the folio in place as they should. It’s sturdy enough to allow for lap-top typing, whereas many folio-style tablet keyboards just pitch over backwards. However, it doesn’t allow for angle adjustment as a laptop or netbook would.

Whilst the case really is quite thin for a full-on keyboard (just under 20mm, to the Tab’s 8mm), it’s rather heavy at 450g. That might not sound like much, but the Galaxy Tab 3 10.1 itself only weighs 510g. Adding the keyboard folio gives you almost a 90% increase in weight, to a total of 960g. On one hand that’s disappointing, but on the other, the keyboard kind of has to weigh about the same as the tablet itself. If it didn’t, it wouldn’t provide that stability and balance that keeps the tablet from pitching off your lap, or falling over on the desk every time you try to type.

We did find it ridiculous, though, that the packaging claims “you’ll hardly notice it’s there” regarding the thickness and weight. Yeah, um, it’s pretty obvious that your tablet has just doubled in weight and more than doubled in thickness.

Overall, we’d recommend the Logitech Ultrathin Keyboard Folio S310 to Samsung Galaxy Tab 3 10.1 owners. Whether your tablet needs a keyboard or not is a matter of preference, but if you decide it does, this one is well worth a hundred and thirty bucks.