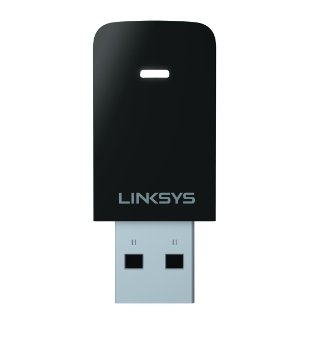 The AC600 USB dongle works best when not too near and not too far from the router. It also makes the most noticeable difference on the 5GHz band. But if you've a recent mobile device the internal antennae setup is likely to be faster.

As part of an ongoing WiFi investigation we’ve tested three of the latest routers from Netgear, Linksys and D-Link. The first two use the latest, speedy MU-MIMO technology which keeps fast devices running fast even if there are slow devices on the same network (with D-Link the MU-MIMO firmware is in beta). The trouble is, you need a MU-MIMO-compatible adapter in your mobile device to make MU-MIMO work and most laptops and tablets don’t have that.

The good news here is that while we’ve come to expect proprietary technology solutions (ugh!) in this area to only work with specific brands and/or products, a MU-MIMO USB device like the AC600 will work with any MU-MIMO router.

As we found in our primary MU-MIMO test, WiFi adapters that are already built in to mobile devices can already achieve strong performance on a MU-MIMO router as the routers tend to be fast anyway and the notebook’s antennae are strong. So does using something like the MAX-Stream AC600 Wi-Fi Micro USB Adapter make things faster?

Testing was performed in a three-storey, Sydney townhouse. On the ground floor was our wireless router which was connected via Ethernet cable to our Alienware Alpha test PC. We then performed three sets of speed tests: next to the router, in a bedroom one floor up and finally two floors up in a second bedroom. We used three of the latest routers: Netgear’s Nighthawk X8, D-Link’s DIR-895L and Linksys EA9500 plus our existing router, an older D-Link DIR-890L (which is isn't MU-MIMO compatible and only has one 5GHz network band) for comparison. We ensured that each test was stable and ran it again if it was not.

In order to test the MU-MIMO technology, we added other devices to each network: we had an old iPad 2 playing V for Vendetta on Netflix (next to the router) and Tinkerbell and The Lost Treasure playing on an Xbox One upstairs (also using Netflix) in the second bedroom. We also performed tests on an empty network from the one-floor-up bedroom for comparison.

We then transferred a 2GB movie file across the networks using both 2.4GHz and 5GHz WiFi bands. We did this using both the native WiFi adapter in a Surface Pro 3 – a Marvell AVSTAR Wireless-AC Network Controller – and then we disabled that and ran the tests using the Surface Pro 3 with the Linksys AC600 MU-MIMO USB dongle. All computers were running Windows 10.

All results are posted in MegaBytes per second. Results from the Surface Pro 3 are in orange while the results from the Linksys AC600 MU-MIMO dongle are in Blue.

The D-Link routers use a technology called Smart Connect where they broadcast one network ID and then the router automatically chooses which band (2.4GHz or 5GHz) to use to connect to your device. It appears the older D-Link router chose the 5GHz band to sneak in a high score (the newer one didn’t). Nonetheless, with the rest of the devices, the Surface Pro 3’s WiFi noticeably outscored the AC600 MU-MIMO dongle. It appears the AC600 doesn’t like being too close to a 2.4GHz network.

In the 5GHz tests the newer D-Link router appears to have chosen the 2.4GHz band and ran slow accordingly. However, in all the other tests, while the AC600 dongle scored consistently higher (than in the 2.4GHz tests) it was still roundly beaten by the integrated WiFi of the SP3.

At 2.4GHz In the first bedroom, There wasn’t much change among most of the Surface Pro 3 scores (the older D-Link model looks to have dropped back to a decent 2.4GHz speed here). Interestingly, while all the AC600 MU-MIMO dongle scores were lower than the SP3 (again) both the Netgear and D-Link scores stayed the same and the Linksys got faster. This suggests that the MU-MIMO adapter is a bit happier when further away from the router.

On the 5GHz band this was far more pronounced. Finally, the AC600 MU-MIMO dongle scores started to out-perform the SP3. Except for with D-Link which may demonstrate that, for once, a lack of MU-MIMO compatibility was a hindrance.

As can be seen, we later ran these tests on an empty network – it had become evident that one-floor-up was the AC600 MU-MIMO dongle’s sweet spot by then – in order to see how much difference having ‘slow’ devices on the network actually made. On the SP3’s WiFi, at 2.4GHz, across the board, speeds slowed down less than 3MB/s when there was other traffic present. All speeds were still faster than with the AC600 MU-MIMO dongle although slowdowns only ranged between 0.3 and 1.1MB/s. That slightly-narrower range may represent a win for MU-MIMO, but when you’ve already lost the race, how much does it matter?

Things changed in the 5GHz test. Speed drops were minimal on the SP3’s WiFi (save for one of the Netgear's two 5GHz networks recording a 3.1MB/s drop). However, when MU-MIMO kicked in, we finally saw some differences. Both the Linksys and Netgear results got faster when the AC600 MU-MIMO dongle was used. As for why this would be faster than an empty network is anyone’s guess. Perhaps, it was triggered into putting in extra effort? Meanwhile, D-Link’s low scores were likely caused by its “intelligent” Smart Connect technology using the 2.4GHz band by mistake although we can't rule out a MU-MIMO-related technology component.

At two floors up, at 2.4GHz, the Surface Pro 3 won again. Speeds were noticeably faster than when using the AC600 dongle. The D-Link couldn’t actually connect at all when the dongle was used.

We’ve also tested Linksys’ RE7000 Max-Stream AC1900+ WiFi Range Extender with this AC600 USB dongle and you can see more results there. They largely reflect what we saw here though.

If you are too close or too far from the router then the AC600 dongle struggled when compared to the Surface Pro 3. We suspect this is due to the size and arrangement of the antennae in the SP3 more than anything else. On the sweet-spot (one-floor up at 5GHz) occasions when the AC600 dongle’s technology really kicked in, we saw some decent performance. We strongly suspect that if this technology was built into a device like the SP3 we’d get even more speed.

We must remember that the Surface Pro 3 (and its innards) still represent recent technology. Many people will have laptops and tablets that struggle with WiFi – especially if it’s not 802.11ac (the latest standard) compatible. If this is the case and you want to boost the WiFi in your home with a MU-MIMO router then the dongle can make a great choice and you’ll notice a great difference.