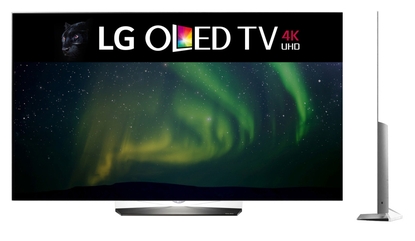 LG's 2016 OLED TVs are a notch above all the competition and get even better when paired with Dolby Video-compatible content. They sound great and are a joy to use. That you can buy one for well under four grand rounds off the best TV we've ever seen.

LG announced this 4K TV back at CES last January and it even started selling them this year. But it hasn’t given them out to reviewers… until now. We think that's a shame as they’ve missed a trick here. We knew these TVs were good as they’ve always been good, but now we’ve given a new model a proper workout, it’s hard to fault them.

If you go to LG’s OLED website you’ll notice what a clusterfail it is. Many 4K OLED TV models reside on it and it’s hard to establish which the new range is (hint: not the ones with the big black cat). After all, these TVs are particularly-expensive to produce and LG is loathe to discount old stock to make way for the new models. Fortunately, things become simpler when you know what to look for. The way the current range works is this…

All models have the same panels and components but the key differences come in the form of cosmetic changes and sound bar inclusion.

First there’s the B6-series which starts at just $4,199 RRP for the 55-inch model. The C6-variant is basically the same but curved. Both are available as 55 and 65-inch units. Despite representing the base level it’s anything but a watered-down cheap version. It’s unfathomably thin and, were it not for it’s siblings, it’s probably the best looking TV on the market – from all angles.

The following are all RRPs and you can already find them for several-hundred dollars less.

Above this is the E6-series which is the same panel and electronics with slightly different construction plus an integrated sound bar. Instead of a lightweight plastic and aluminium backing, the panel has a glass layer. Giving the TV a slightly-different appearance. The difference in picture quality is minimal – there’s a 50nit brightness difference but, side by side, we couldn’t see a significant difference and the local LG representatives themselves said they were surprised to learn of it. However, after handling the B6-series, it's worth pointing out that if you are likely to move the TV around a lot, then having the additional strength of the glass panel might well be useful - it makes the TV much more robust.

At the top of the list is the G6-series “Signature Edition.” Again this uses the same panel and electronics but is designed to look sublime from every angle and sound even better thanks to its built-in premium sound bar.

Ultimately, the same awesome TV gets blinged up the more you pay.

Our review model is the 65-inch B-series series but the performance described below is what you can expect from the whole range.

We now live in a world where, largely thanks to Netflix, there is plenty of 4K Ultra High Definition (UHD) content and it’s easily and cheaply accessible (so long as you have an internet connection that can stably-stream at 20-25Mb/s!) but still many people will be watching poor-quality content whether it’s on cable TV, free-to-air TV or downloaded movies. It’s in these, ‘real-world’ areas that some high-end TVs (especially past LG OLED models and most Samsung TVs) have fallen down – they look great at displaying the best-quality content (as most 4K TVs do) but ‘regular’ lower-resolution TV can look terrible. As such we test for all kinds of content – from 60fps 4K demo reels to Dora The Explorer on Nickelodeon (which can look like a blotchy mess when its low resolution is upscaled badly).

For this reason, we don’t test TVs in a lab environment, we live with them at home to find the foibles. If the wife swears at the screen you know there are issues, and four-year-old girls don’t suffer crappy representations of Dora too well. It also means a wide variety of content quality is watched.

This TV is the first we’ve seen with a Dolby Vision chip. 2016 is the year High Dynamic Range became a thing. This moved the colours on show from 8-bit to 10-bit which is a technical way of saying that more colour and detail started appearing in light and dark areas. However, when a film is pushed into digital distribution, whether on Netflix or UHD Blu-ray discs, the amount of HDR picture information is still averaged out across the whole movie – the brightest bright scenes are ignored along with the darkest dark scenes – the most extreme-lit scenes still can’t be displayed (this is an oversimplified explanation, for more info see here). However, what Dolby Vision does is provide additional information on lighting and colour for each scene – basically telling the TV where the HDR scale should begin and end. So far we’ve only seen it work in two instances neither of which are, unfortunately, The Godfather Part II. They are cinematic classics, Pan (on UHD Blu-ray) and The Do Over (on Netflix). Awesome.

However, what we did see makes quite a difference. When compatible content is detected, a pop-up appears saying that Dolby Vision has been detected. In Pan, a scene where people are flying around in airships suddenly looks extraordinary compared with regular HDR thanks to bluer skies and no washed out details in the clouds. You can even see the centre of the Sun. In The Revenant you can see the detail of the flames without them turning into a bright blur. Meanwhile The Do Over, for all its failings, does indeed look impressive (for technical reasons). There are many light and dark scenes but all of them were impeccably lit. More of this please!

We should note that Sony has a similar system where its TVs can read Sony metadata on its own discs to create a similar effect. You can read our review of Sony’s main 2016 TVs here (which, incidentally were tested against last year’s LG OLED TV).

We watched a fair amount of UHD Blu-ray on this TV. Every bit of it looks stunning – as is usual on a 4K TV but particularly so on OLED. Now, however, the brightness rating has moved from 450 nits to 700 (750 for the E and G-series) and it's noticeably better than last year’s range - we’re running out of superlatives. Colours are vibrant but not too much so. Blacks are absolutely black. We’ve said this about OLED for years. But now it’s even better. This is the benchmark for all TVs.

We focused on our main test – the opening scenes of The Martian as there are true-black space scenes with bright elements. The title sequence tells us a great deal about a TV. With regular LCD TVs, light is shined through a layer of crystal whether the colour on display is bright or black. While some TVs are borderline-magical at masking light leakage (especially the amazing Hisense ULED Series 7 models) others, including Panasonic’s expensive rear-lit model, can let too much light through, creating distracting light-blooms around details. This is called the Halo effect. Because OLED only lights up areas with detail, everything else stays black because the screen is basically turned off in those areas. As such, not surprisingly, the opening title shot of The Martian looks, well, perfect.

The panning shots of cliffs at the beginning of the movie are another tell-tale quality shot. Firstly the panning is perfectly smooth with no juddering or pixelated edges, but there’s also plenty of detail on display in the dark cliffs while the bright red background still looks vibrant and detailed too. With TVs like Sony we can achieve this to some degree by playing with the colour settings while watching the movie, but that’s a drag and even it doesn’t offer pure-black letterbox bars. Here we have bright red areas married with detail in dark areas plus jet-black letterbox bars in default mode. Perfect. It’s actually really hard to get a photograph to illustrate this as the camera’s dynamic range struggles to match what’s on show! You can even choose between three settings: HDR Standard, Bright, and Vivid, which to our minds move from great to better to best in that order.