A highly customisable 15.6in laptop for getting down to work 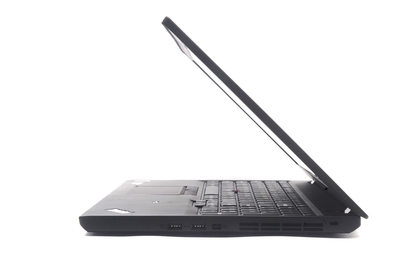 Occasionally, reviewers are sent versions of notebooks that don’t really show off the best that the manufacturer has to offer. The Lenovo ThinkPad T550 is one such example, with the basic spec that was sent to us being merely a curtain raiser for what this laptop is about.

At 15.6 inches, it’s a wide unit that won’t top the list of ‘most portable laptops’ any time soon, but it’s not overly thick (27mm with the lid closed and counting the feet on the bottom panel), and it actually feels quite light for what it is (it tipped our scales at 2.19kg).

What this laptop represents is a normal computer system that can be used comfortably at home or in the office, and transported via a nice backpack or dedicated carry case when the situation requires it. Most importantly, though, there are plenty of options offered to suit your needs; screen type, keyboard style, battery life, mobile connectivity, storage type and size, memory capacity, and CPU speed, can all be selected at the time of purchase.

The ThinkPad T550 that we are looking at here is a modest one. While the CPU and memory capacity are okay (an Intel Core i5-5200U CPU and 4GB of RAM), the screen was a pale Full HD panel rather than a richer IPS (in-plane switching) panel, and the storage was a 500GB, 7200rpm hard drive rather than a solid state drive (SSD). Needless to say, we were a little sad to see such a basic configuration, especially after being spoiled with IPS screens and SSDs on other recent laptops we’ve reviewed.

But there is a point here: if all that fancy stuff isn’t required by you and the work you do, and all you need is a robust and comfortable notebook, then the ThinkPad T550 is a good, customisable option. A price of $1300 (at the time of writing, and $1645 in New Zealand) was attached to our configuration, and being a business machine, the main differences to a consumer offering are the fingerprint reader and TPM that were installed on our device for that price -- though even the fingerprint reader can be removed from the configuration if you don’t require it, saving you $22 ($25.30 in New Zealand).

The overall look and feel of the ThinkPad T550 is typical ThinkPad, with the chassis being mostly square and minimalist, and the keyboard spacious and generally great. The keys are soft and silent operators that possess plenty of travel, and they are a joy to hit if you are a regular typist. The function keys have been relegated to secondary status, meaning brightness and volume are among the settings that can be changed without have to press the Fn key first.

The Fn key is right in the lower-left corner, but you can swap it around with the Ctrl key if you wish. If the keyboard were backlit on our model, we assume that the Fn-Space bar combination would be the trigger for it (like it is on laptops such as the ThinkPad Yoga), making it a very easy task to switch on the backlight in the dark.

You also get a dedicated PrintSc key, which we love and use a lot due to our work, and there is a dedicated number pad for those of you who need to enter digits at a more rapid rate than most. Pointing duties fall to a smooth touchpad (it’s more of a traditional touchpad with concealed buttons) that’s directly below the space bar, and there is also a customary TrackPoint that can be used as an alternative (or as your main device, if you prefer).

Physically, the laptop feels well made. It has metal hinges that allow the screen to tilt back all the way (good for when you want to get the screen out of the way while giving a presentation perhaps), and the keyboard is spill resistant with a drain that channels water through to the bottom of the laptop. Speakers are also located on the bottom, and they produce loud sound that is more than acceptable for most tasks – especially if you leave the laptop sitting on a flat surface.

Edge connections include three USB 3.0 ports (one of which allows devices to be charged when the laptop is off), Mini DisplayPort, Gigabit Ethernet, VGA (with lock screws), a headset port, and an SD card reader (in which cards are seated wholly). A smartcard reader can reside in the left side if that’s an option you want, and docking is also available through a connector on the bottom.

During our battery rundown test, in which we disable power management, enable Wi-Fi, maximise screen brightness, and loop a Full HD MP4 file, the two batteries combined to last for 6hr 16min, with the removable battery being discharged before the internal battery. Charging is via a 45W travel-sized adapter, and it can take a while to fill both batteries.

Performance from the Intel Core i5-5200U ultra-low voltage CPU was to our expectations, recording 46sec in our Blender 3D rendering test, and the graphics performance in 3DMark’s Cloud Gate was 4213. The Lenovo ThinkPad X1 Carbon that reviewed in January used the same CPU and the same amount of RAM and recorded the same exact time in Blender, but was a little faster in Cloud Gate (4720).

Storage performance was expectedly slow in CrystalDiskMark, with the sequential read speed of the hard drive recorded a paltry 57.4 megabytes per second (MBps), while its write speed was faster at 113.2MBps. It’s a far cry from what it could potentially do with an SSD. If we use the ThinkPad Carbon X1 with its 128GB SATA-based SSD as an example, read and write rates from an SSD could be well over 400MBps.

Lenovo has installed a 16GB SSD in conjunction with the 500GB hard drive. This can make the system boot quicker and speed up the loading of regularly used programs. We found the everyday performance of the laptop during our tests to be fine, with our programs loading swiftly, but we’d still be tempted to forgo the internal high storage capacity for the quickness of an SSD. The other disadvantage of having a hard drive instead of an SSD is that the hard drive parks its heads whenever it senses movement, which can cause things like video playback to stutter until the laptop is stationary again.

Other things to note about the ThinkPad T550 are its wireless capabilities, which include an Intel Advanced-AC 7260 82.11ac Wi-Fi module, Bluetooth 4.0, and the option to have in-built 3G or LTE mobile broadband. There is a SIM card slot in the battery compartment.

Pick up this laptop if you want a 15.6-inch computer that’s relatively slim and light, and which can be configured to your liking. Its keys and touchpad are very good, and the rest of the configuration can be very good, too, if you opt for the right things. We’d opt for the 2880x1620-pixel anti-glare IPS display if colours and viewing angles concern you, and we’d go for an SSD-based model in order to get the best performance and mobility.