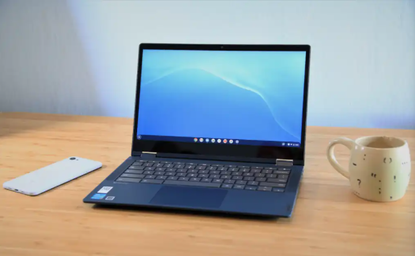 The Lenovo Flex 5 is a good mid-range Chromebook with a decent display, excellent speakers, a nice keyboard, and versatile connectivity.

Those looking for an inexpensive Chromebook are certainly spoiled for choice but, as mentioned in my guide to buying a laptop without getting screwed, buying the right Chromebook can be tricky. Many budget models have lackluster processors, minimal RAM, and sub-par displays.

Lenovo's Chromebook Flex 5 is a 13-inch, 2-in-1 Chromebook that tries to outpace the most inexpensive systems without inflating the price. It's mostly successful in its effort, but owners must tolerate occasional reminders of the system's budget roots.

I reviewed the Lenovo Chromebook Flex 5 13ITL5. It's similar to the most basic model available through Lenovo's own web store but bumps up the processor to an Intel Pentium Gold dual-core with two cores, four threads, and a maximum clock speed of 3.5GHz.

Buyers should note that a similarly priced configuration is available through Amazon with an Intel Core i3-10110U processor and twice as much storage. I expect that model to perform better than my review unit, making it a better value overall.

The Lenovo Chromebook Flex 5 is a surprisingly attractive and confident laptop. I particularly like the look of Best Buy's exclusive configuration which is a deep navy blue. I'm always a sucker for alternative laptop colorways and I especially like how the Flex 5's gray keycaps compliment the subdued blue chassis.

It feels substantial in-hand as well thanks to the metal display lid and the textured plastic of the laptop's lower half. A bit of flex is noticeable when handling the laptop roughly, but it's not obvious in normal day-to-day use. The display lid is especially rigid for a budget laptop, showing only the slightest hint of give.

That's a good thing because, as mentioned, the Chromebook Flex 5 is a 2-in-1. You can turn the display 360 degrees to convert the laptop into a tablet. This is no longer a novel concept and, unfortunately, the Flex 5 has all the usual problems of this design.

Tablet use is possible, yes, but the Flex 5 weighs nearly 3 pounds and is larger than even the 12.9-inch iPad Pro. Flicking through web pages while propping the laptop up with a leg or arm is more awkward than it is enjoyable.

The so-called tent and presentation modes, which use the keyboard as a stand, are more practical. You can flip the hinge 270 degrees to prop the 2-in-1 on your lap or a table. This is perfect for viewing Netflix or YouTube.

Like many 2-in-1 Chromebooks, the Flex 5 places power and volume buttons on the right flank of the laptop instead of above the keyboard (or both). This location makes sense when using the 2-in-1 in tablet mode but is awkward otherwise. I'd occasionally put the laptop to sleep or changed the volume while fiddling with the right-side ports. 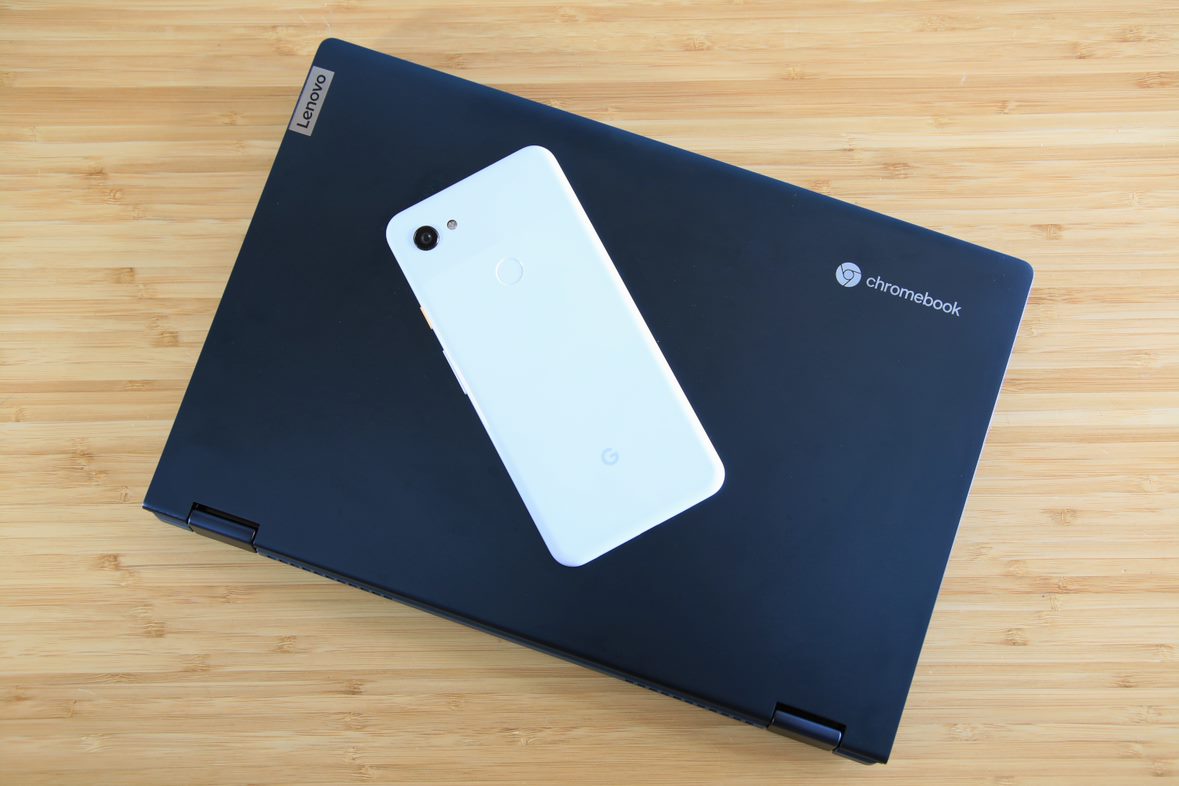 Every Chromebook Flex 5 configuration has a 1080p IPS touchscreen. This is among the laptop's greatest perks. A 1080p screen is not guaranteed at the AU$625 price point, but it's a big plus and it separates the machine from less appealing competitors like the HP Chromebook x360 14a and entry-level variants of the Asus Chromebook Flip line.

It's a decent display as well. I measured a maximum brightness of 298 nits, which is more than the promised 250 nits and high enough to make the glossy screen enjoyable when used indoors (outdoors use, however, is a no-go).

1080p video looks sharp and bright. Colors are noticeably subdued to any premium laptop but, at this price point, it's hard to complain. I did notice a few bright spots along the edges of the screen in dark scenes, which can be distracting when watching video in a dark room.

If I was pleased by the screen, I was shocked by the speakers. The Flex 5 has a pair of upward-facing speakers along each side of the keyboard. That already puts it ahead of many most budget laptops, which often put speakers in a downward-facing position that can sound muffled on your laptop. Better still, the speakers are loud, clear, and have just the slightest hint of bass. 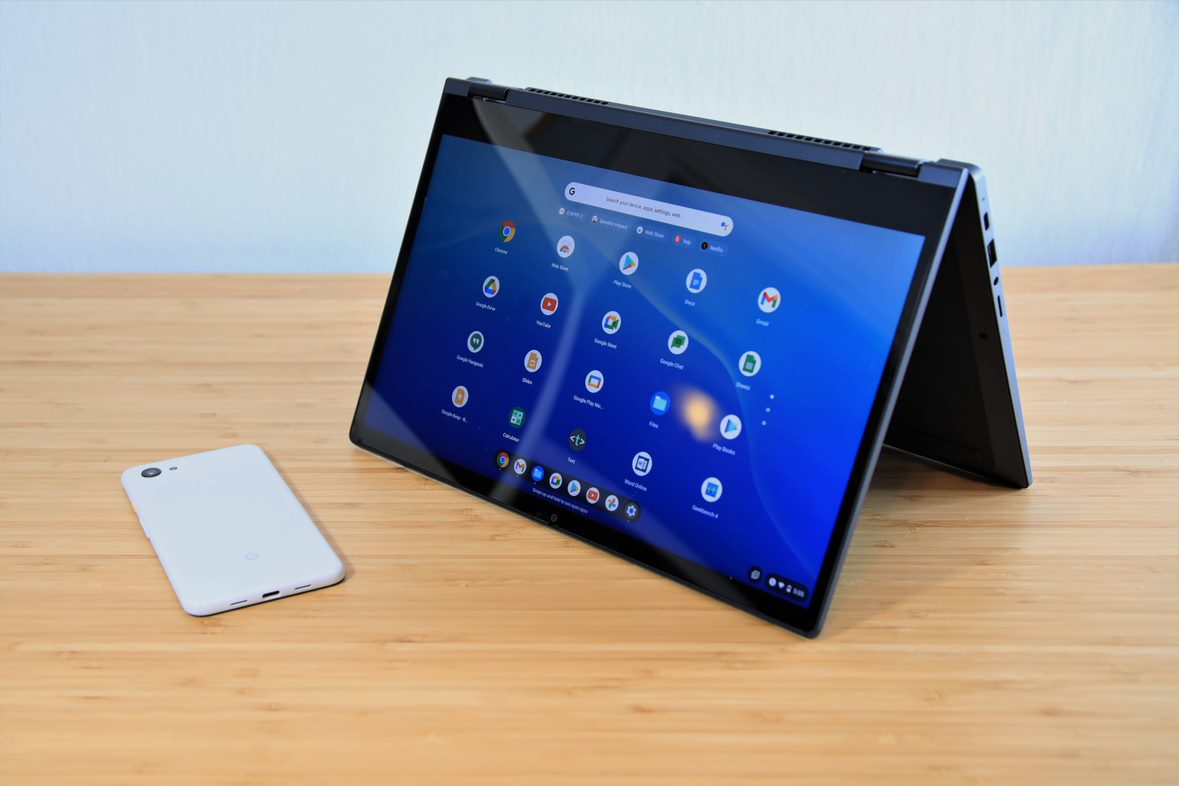 Need a laptop that's great for video conferencing? You'll want to pass on the Flex 5. It has a simple 720p webcam that commits all the sins common to laptops. Video quality is soft, fuzzy, grainy, washed-out, and nearly unusable in low light. The microphone sounds thin and dull, though it rejects unwanted noise fairly well.

There is one bit of good news: the camera has a built-in physical privacy shutter.

The Lenovo Chromebook Flex 5 has an excellent keyboard. Key feel is crisp and taut with significant key travel and a bottom action that's firm but not harsh. While the keyboard certainly does not use mechanical switches, it does have a confident, tactile feel that may appeal to fans of mechanical keyboards.

Even the layout is excellent. Most Chromebooks have a similar key layout, but some models can feel a bit cramped. The 13-inch Flex 5 largely avoids this problem and also offers a decent amount of space on the palm rest. Professional NBA players might feel cramped, but most owners will be comfortable.

The touchpad measures about four inches wide and three inches deep, which is average for a 13-inch laptop, and responds well to the touch. I'm not a fan of its simple plastic texture, though, as it creates just a bit too much friction when scrolling through documents of websites. It gets the job done, at least. And don't forget the touchscreen. It provides a useful alternative for scrolling or zooming.

Lenovo's USI Pen is compatible with the Chromebook Flex 5 and could be useful for those who want more precise touch input. It was not included with my review unit, however, so I was unable to test it. 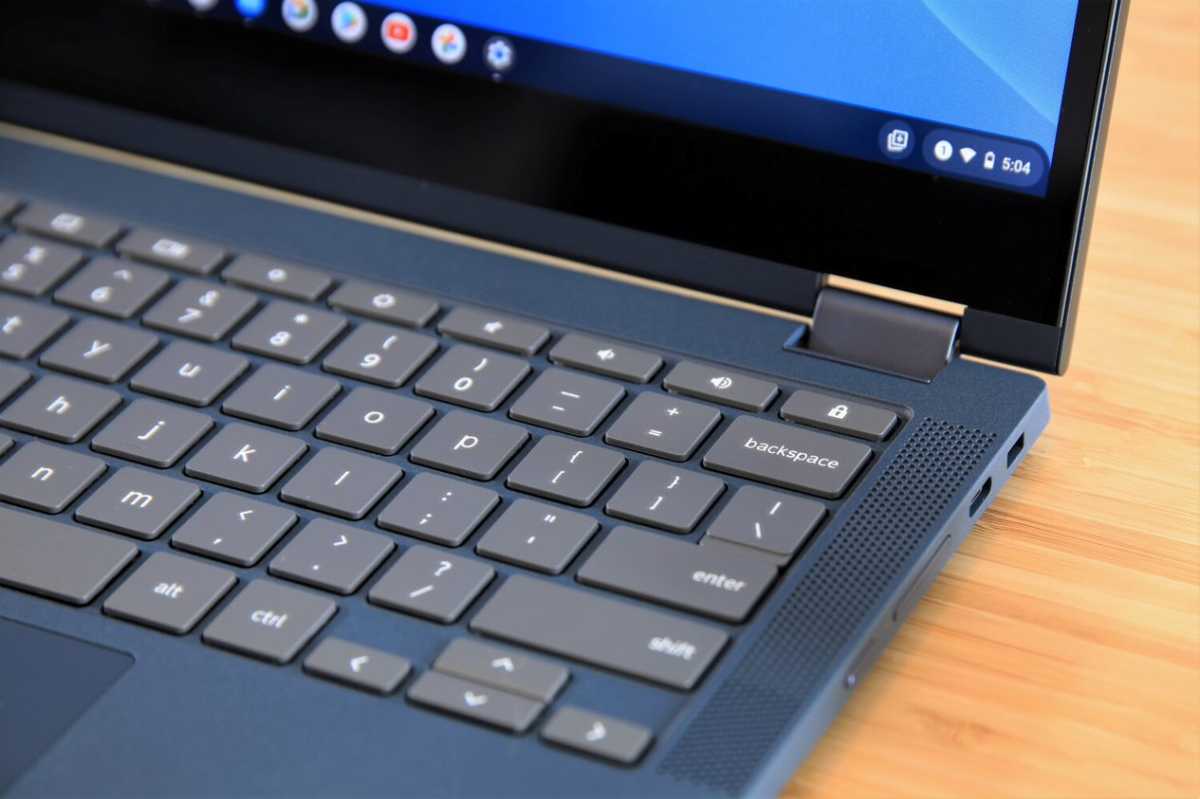 The Chromebook Flex 5's connectivity looks towards the future. It has two USB-C ports, both of which support DisplayPort 1.2 and Power Delivery 2.0. The included charger also connects over USB-C.

A single USB-A port provides legacy connectivity. It's joined by a 3.5mm combo audio jack and a microSD card reader on the 2-in-1's left flank.

These are strong results for a laptop at any price point and well above the Internet speeds available in most homes. 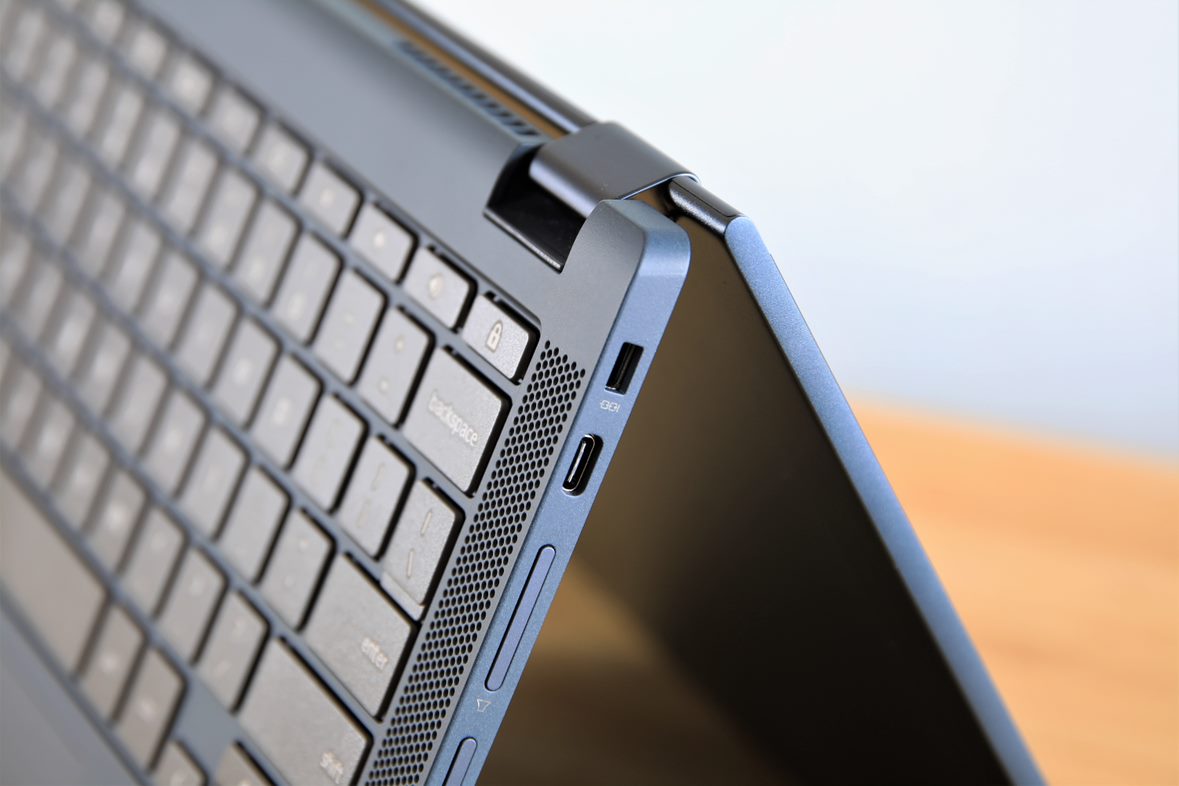 The Lenovo Chromebook Flex 5 configuration I reviewed had an Intel Pentium Gold 7505 dual-core processor with four threads, a base clock speed of 2GHz, and a maximum Turbo Boost speed of 3.5GHz. Although branded as a Pentium processor, it's based on the Tiger Lake architecture common to Intel Core 11th-gen chips. The processor is paired with 4GB of DDR4 memory and a meager 32GB of eMMC storage.

The Chromebook Flex 5's benchmark results are fine but not impressive. These scores certainly lag what you could expect from an Intel Core i3 processor. However, they easily defeat an entry-level Chromebook with a MediaTek chip or an Intel Pentium processor that's several generations old.

Real-world performance fell in line with the benchmark results. The Chromebook Flex 5 is fast enough for most web browsing, document editing, or marking up PDFs in a web app, but can feel taxed by demanding tasks. It balked and sputtered through a large Google Sheets project and began to pant when my tab count exceeded a dozen.

Gaming is a struggle. I tried several Android games including Genshin Impact, Alto's Odyssey, and Fallout Shelter. Each stuttered incessantly, and Genshin's Impact crashed at the login screen (which, to be fair, has occurred on every ChromeOS laptop I've tested this year). I managed to enjoy a few Itch.io games running through WebGL, at least, and Stadia worked as well as on other laptops.

The tiny 32GB eMMC could be a problem. My review unit had only a smidge more than 10GB of storage available when I first booted the machine. That's passable for a Chromebook since you can lean heavily on Google Drive, but a few large Android apps or video files can eat up that space in a hurry.

This might all sound disappointing but, as always, price matters. The Flex 5's performance is acceptable for a laptop in its price range and it will get most people through day-to-day use without issue. More powerful ChromeOS 2-in-1s like the Asus Chromebook Flip CX5 come with a higher price tag.

Every Chromebook Flex 5 configuration has a 51 watt-hour battery. This led the 2-in-1 to a battery result of eight hours and 22 minutes in the CrXPRT 2 battery benchmark, an average result for a Chromebook.

Real-world battery life didn't quite live up to the benchmark. The Flex 5 lasted six to seven hours in my typical use, which consists of browsing web pages, watching YouTube, and editing documents in Google Docs, Sheets, and Microsoft Office web apps.

Overall, the Flex 5's battery performance is acceptable for the price. Most laptops under US$400 (AU$650) have a smaller battery and some have a larger display, which leads to even less impressive endurance. Need true all-day portability? Spend more or buy an iPad.

The Lenovo Chromebook Flex 5 is a solid mid-range Chromebook with a good display, excellent speakers, a nice keyboard, and versatile connectivity. Its performance and battery life fail to stand, but that's acceptable at the 2-in-1's AU$625 price point. The Flex 5 didn't blow away my expectations, but I did enjoy using it and that alone makes it easy to recommend for shoppers on a AU$700 budget.