Choosing between these earbuds and their main rivals is a matter of taste. The Jabra 85t packs excellent sound, superb active noise-cancelling, and high customization into a compact package. These aren't the perfect buds for everyone, but they're still a fantastic option for many people.

Commutes are back. So is travel. And while over-the-ear noise-canceling headphones hold some performance advantages, their true wireless earbud counterparts can't be beat in portability.

With the likelihood of greater mobility in 2022, we put our attention back on this class of earbuds. Among the standouts is the Jabra 85t—launched a year ago, these ANC buds challenge top-tier models like the Sony WF-1000XM4 and Bose QuietComfort Earbuds not just in specs, but in price, too. At MSRP, they cost $50 less.

But you won't notice much sacrifice in performance despite the lower price: The Jabra 85t offers pleasing sound and strong noise canceling. The primary compromise you'll make is battery life, but as you'll see, it's a fair trade-off. 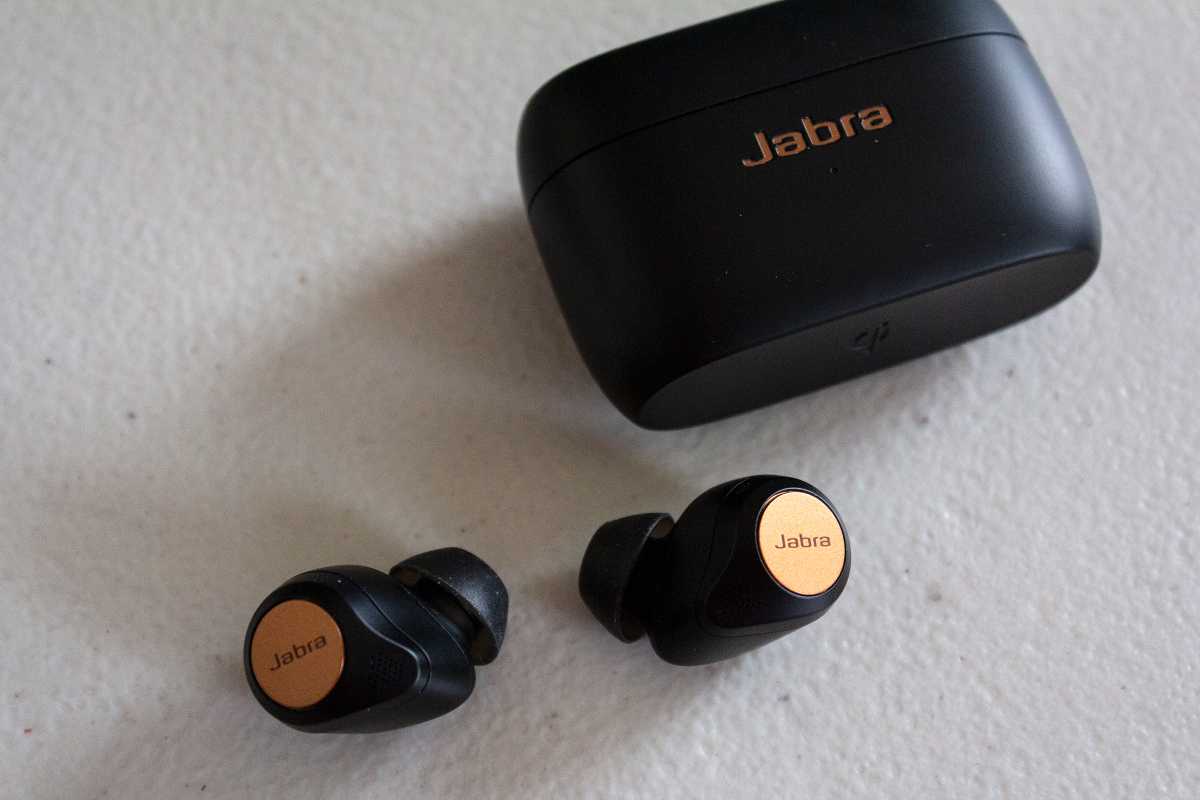 The Jabra 85t are quite compact for true wireless earbuds.

The Jabra 85t takes the best qualities of its top rivals and puts them into buds that fit and travel extremely well.

The Jabra 85t's color variations play it safe—three of the five are riffs on black. Our sample pair was the Copper Black version, which is mostly pitch-dark with metallic accents on the control buttons. Each bud is marked clearly as right and left, though the monochrome label on our pair can be difficult to see in low light.

These semi-open buds are compact for true wireless models, and compared to the hulking Bose QuietComfort Earbuds, the 85t is downright tiny. They don't feel that much more substantial than chunky wired models like the venerable Monoprice 9927, either.

For my body proportions, this diminutive sizing feels just right. Popping the Jabra 85t buds in and out of their case is easy, and I'm not overly conscious of them when they're in my ears. I also get a good fit with the included eartips—surprisingly good. They're secure without pushing too hard against my skin. I usually kept them on around water even despite their IPX4 rating, which only protects against splashes and not a full-on dunking.

mentioned in this article 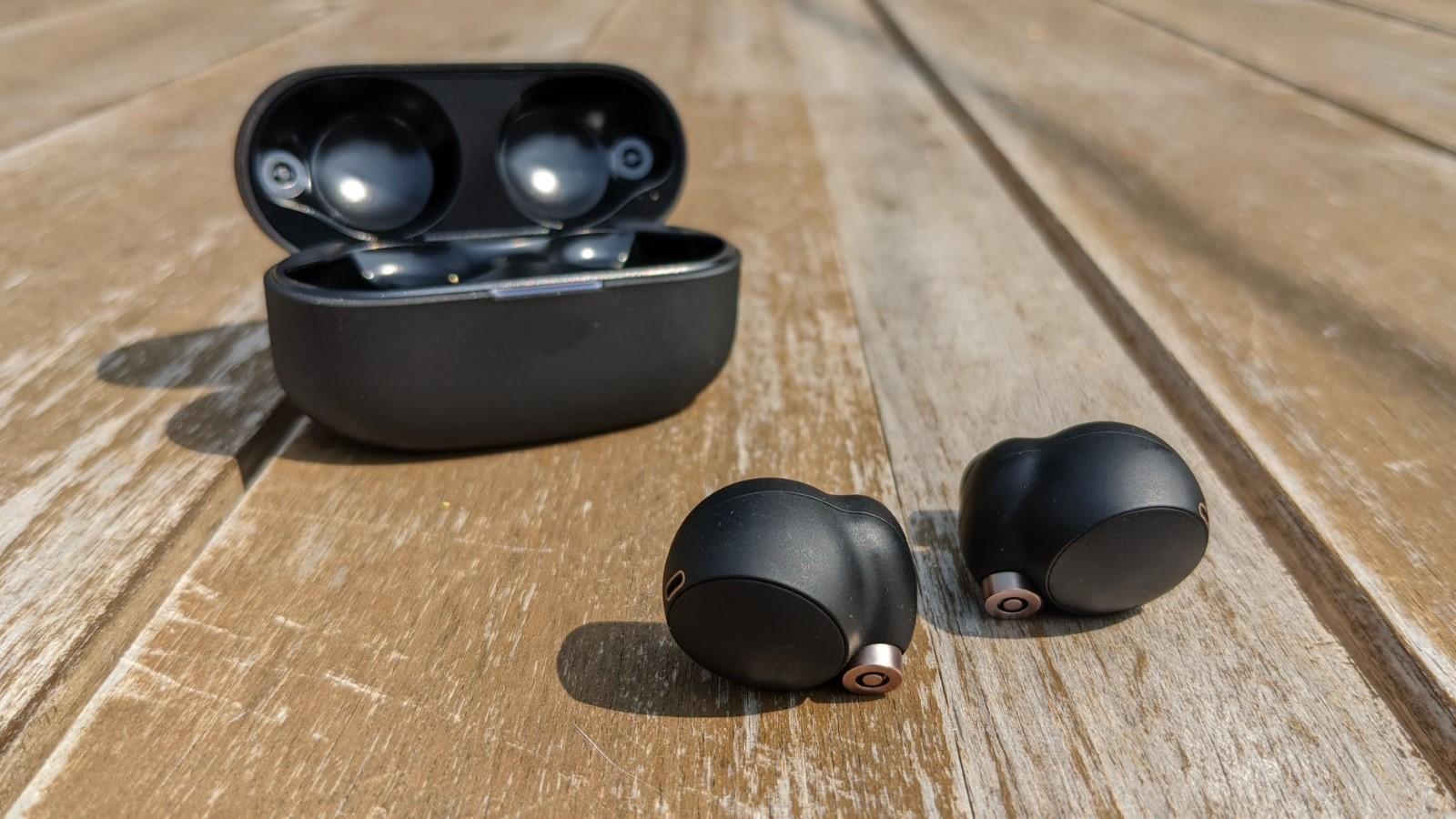 But also surprising is that I have to use the large eartips. My ears fall somewhere between small and medium for most earbuds, and on average I go with medium. If you usually take large or extra large, you may struggle with fit out of the box. (A friend of mine who normally borders on XL immediately rejected these buds for being way too small.) Some users have found success with third-party tips, like those from Spinfit and Comply, but your mileage will definitely vary. Fit is incredibly personal with earbuds.

The included charging case also takes little space—like the Sony WF-1000XM4, the Jabra 85t's case slips easily into in a pocket (a miracle given the size of women's pockets). I never mind taking it with me on a walk, especially since it provides several full charges. 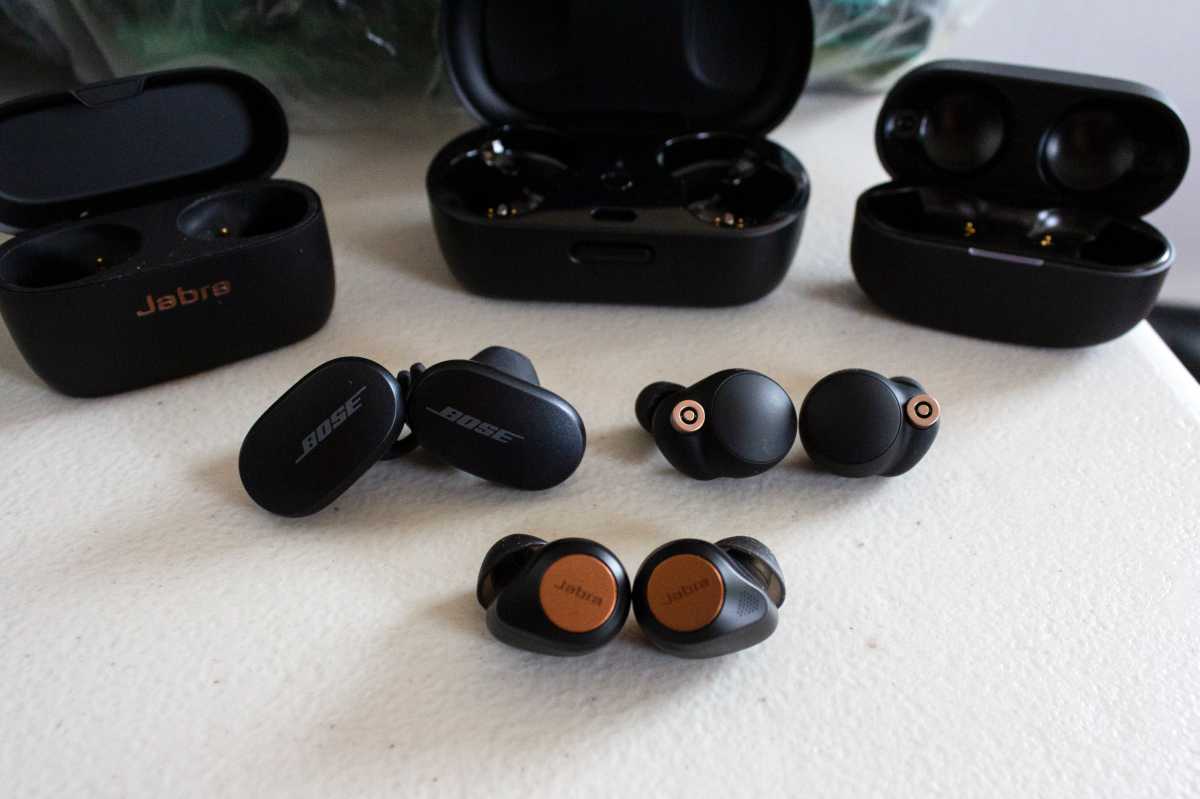 The Jabra 85t's default sound profile is warmer than the Bose QuietComfort Earbuds (rear left), but not as warm as the Sony WF-1000XM4 (rear right). Image: Alaina Yee / IDG

Audio sounds neutral and clean on the Jabra 85t, but with just enough bass to keep it from feeling sterile. Listening to music with these earbuds tends to feel a little more crisp than with rivals like the Sony WF-1000XM4, which is warmer across all of its sound profiles. Mid and low frequencies get a little more emphasis (like most mainstream consumer earbuds), and so high frequency elements can feel a little muted at times.

You can adjust for this somewhat in the 85t's EQ settings (via the Jabra Sound+ companion app), but not by a dramatic amount. In general, the six sound profiles and any manual equalizer adjustments to them are more subtle, though still discernible. Jabra does an excellent job with the EQ interface in the app, too, with a good balance between being simple enough for non-audiophiles and full control over a frequency range. (You can make as small of an adjustment as you prefer.) I like the default Neutral profile pretty well as it is, since voices come through distinctly against percussion instruments. But I had no objections to bumping up the bass, as it adds more richness to songs without overwhelming them.

To further customize your music listening, you can flip on a feature called MySound, which applies a personalized hearing profile to songs. After going through a hearing test, the app analyzes what frequencies to emphasize per ear and adjusts music playback accordingly. It's an interesting trick, but I found I preferred music without the processing on. My profile kept shifting audio to be more dominant on my right side, which threw off my sense of physical placement for instruments and singers.

In calls, incoming audio sounds clear—you can easily sit through hours of meetings with these buds. Outgoing audio is not quite as good, as the 85t tends to overcompress the transmissions. You get clear, discernible sound, but with a slightly robotic edge. It's acceptable to listen to but not enjoyable, so I ended up leaving the sidetone feature off (the ability to hear my own voice while speaking). If you're buying the 85t primarily for speaking during conference calls, you should probably look into a different set of earbuds.

Volume across all types of audio can go fairly high. To stay around my preferred volume (loud enough to block normal conversation with noise-canceling on), I usually was in the high 30 to low 40 percent range.

Active Noise canceling levels can be adjusted from the main screen in the Jabra Sound+ companion app. Image: PCWorld

Active noise canceling on the Jabra 85t works quite well—at full strength and with no music playing, it muted the noise of a moderately busy city street by more than half. (If I had to give a rough estimate, I'd say about 60 to 65 percent.) If you play music at moderate volume, it silences much of the remaining background sound. The 85t's ANC blocks out conversations and TV audio well, too. I like these almost as much as the Bose QuietComfort Earbuds, which rank as a top performer for ANC. The only real limitation is having just five levels of noise-canceling strength to choose from.

The hear-through mode, which actively pipes in audio from your environment, is also one of the most natural takes on ambient sound I've heard. It has much milder echo effect than on other earbuds (and for me, less effect on spatial awareness as a result). I often found myself toggling to it rather than taking the buds off. You can adjust its strength in a similar fashion as active noise canceling.

An optional off mode exists as well. It's handy for conserving battery life, since both ANC and hear-through mode make active use of the Jabra 85t's microphones. 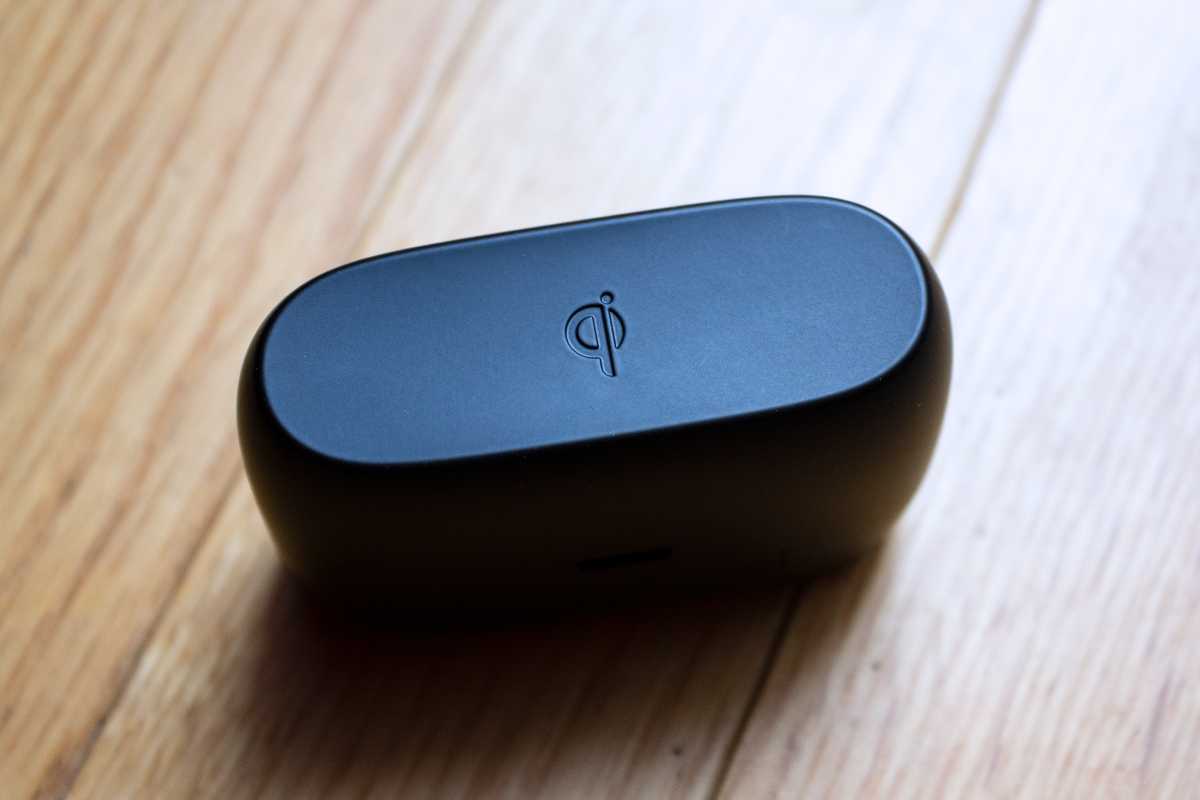 Relative to its rivals, the Jabra 85t's one weakness is its run time. It's rated for 5.5 hours with noise-canceling on, but I found my pair typically gave out after 5 hours of continuous music playback. Given the 85t's smaller size, this lower battery life isn't surprising, but it does mean you get about an hour less than you would with the competition.

Jabra makes up for this shorter span with its case, which can provide another 3.5 full charges (give or take) before you have to juice it back up again. If you need just a quick hit, you can get 60 minutes of play time after just 15 minutes of charging in the case. As a result, I never had battery anxiety while out and about.

To push the battery further, you can turn off both noise canceling and hear-through modes. It doesn't affect audio quality, and you'll gain another hour or so of run time on the buds.

Pairing the Jabra 85t with devices (including PCs) is straightforward. You can link up to eight different devices. Once that's complete, you can have up to two devices simultaneously connected to the 85t.

This standout feature sets the 85t apart from its rivals, as you can play music or accept calls from either device. You can't receive audio at the same time from both, but going back and forth between the two is seamless. Press play in an app on one and the other piece of gear automatically silences.

There is one small quirk—if you want to change which two devices are connected, you must first manually disconnect from the gear you no longer want to use before you can connect to the new device(s). So if your 85t buds automatically connect to your previous two devices and one isn't the item you need, you have to first find that and disconnect. It's mildly annoying, but manageable.

On occasion, you can sometimes run into issues in some apps when two devices are connected, but it's not a fault of the Jabra 85t. For example, Spotify doesn't always understand which device to output to, and so it'll keep stopping playback. It's easily fixed by reconnecting one or both devices.

Bluetooth range on the Jabra 85t holds up well—when visiting family with multi-story houses, I could often keep the connection through multiple walls, or while on one floor above or below. 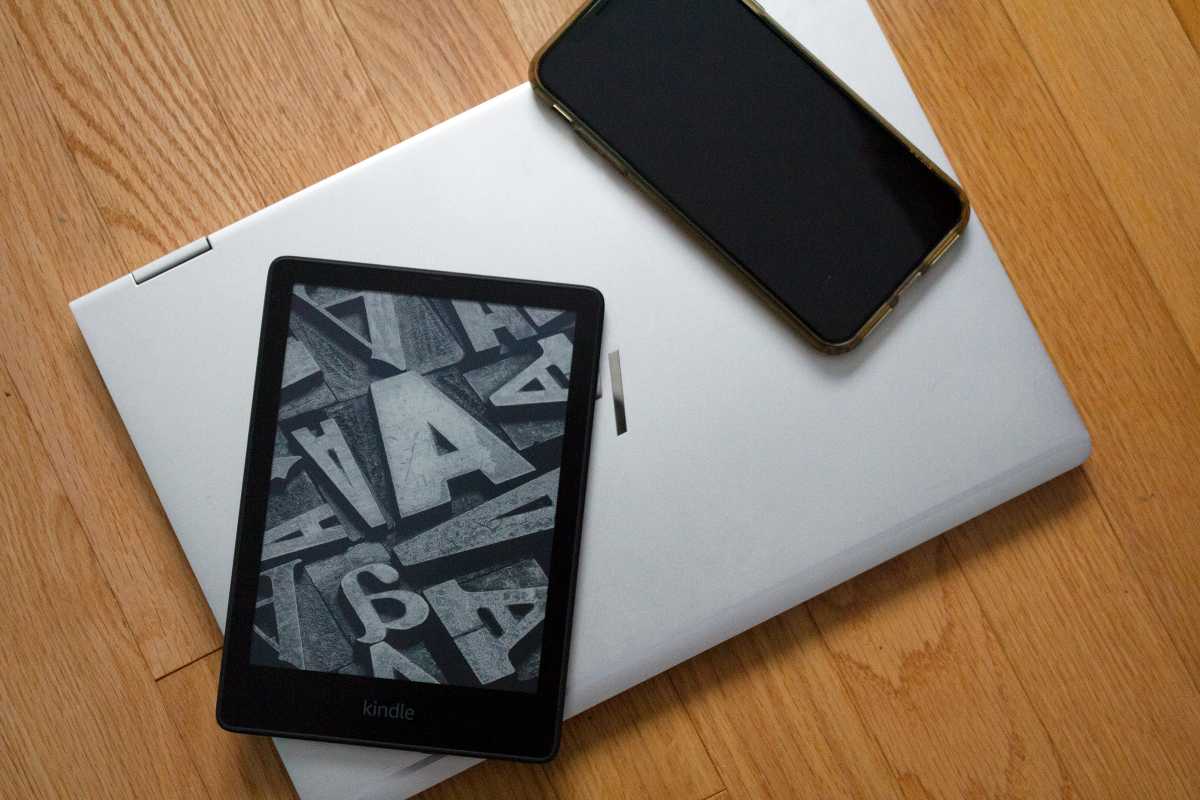 Not only can you pair up to eight devices with the Jabra 85t, but you can have up to two devices simultaneously connected, too. Image: Alaina Yee / IDG

To control the 85t, you press the discrete buttons on each earbud. If I had to go by interfaces alone, the Jabra 85t would be my favorite—I never have to worry about the errant brush of clothing, a hand, or my hair triggering an unwanted command, as I do with some earbuds that rely on touch input. The tactile feedback is satisfying, too, and you don't need much pressure to bottom out and feel a click.

More importantly, the 85t offers a good range of commands. One, two, and three clicks can all be active options at the same time per bud, and you can assign any of the presets (Play/Pause, Next Track, Restart Track, Voice Assistant, and ANC sound mode toggling) to each type of button press. The only thing missing is a preset to go back to previous tracks.

You can also customize the buds' behavior if you take one out of your ear. By default, pulling either bud will pause music or video playback. You can turn off that feature in the app. You can also use the right bud on its own by placing the left bud back in the charger.

To get the most out of the Jabra 85t, you must install the company's Sound+ app on a smartphone or tablet. Unlike other apps, Jabra's somewhat buries settings—instead of different tabs on the main screen, you have to go into multiple sub-menus to get at most everything (button command customization, auto-pause behavior, power saving, finding the earbuds' last location, etc). Only battery info, noise-canceling mode, sound profiles, and EQ settings live on the main screen. The high polish of the interface mostly smooths over this annoyance, though.

The Jabra 85t blends excellent sound with superb active noise-canceling in a compact package. For me, it takes the best qualities of its top rivals and puts them into buds that fit and travel extremely well, making them my preferred choice. If your needs lean more toward lots of phone calls, a larger fit, or a bit more battery life, you may be happier with another set, but for many people, these will be a very strong, highly customizable pair of true wireless earbuds.