IvyBackup review: Promising, open format, but not quite ready for prime time IvyBackup sports a clean look, and saves in common Zip and VHD formats. However, it didn't check if there was enough space for its image backups, which caused ssome unlogged failures.

I was expecting good things from the US$69 / AU$57 IvyBackup when I first fired it up. I've expressed the thought numerous times that backup programs should use formats that can be opened without the need for proprietary software. IvyBackup uses the common Zip and .VHD formats rather than proprietary containers. Nice.

IvyBackup also supports two destinations per job (local and online), a partial implementation of another feature I lobby for: one data set, many destinations. Kudos to Kudu Computing Ltd. (Sorry, I had to…)

As you might imagine, I was predisposed to a favorable opinion. Alas, while I love that the program implements my favorite feature requests, and I have high hopes for this program's future, instances of poor error-checking and logging render me less than enthusiastic about this current incarnation.

IvyBackup offers both image and file/folder backup. Image files are saved in common .vhd format that Windows creates and understands. Again, this means that should you lose the program, or are recovering data at some time in a distant future where IvyBackup doesn't exist, you will still be able mount the image on any Windows PC (and most other operating systems) and recover the files inside. Nice. 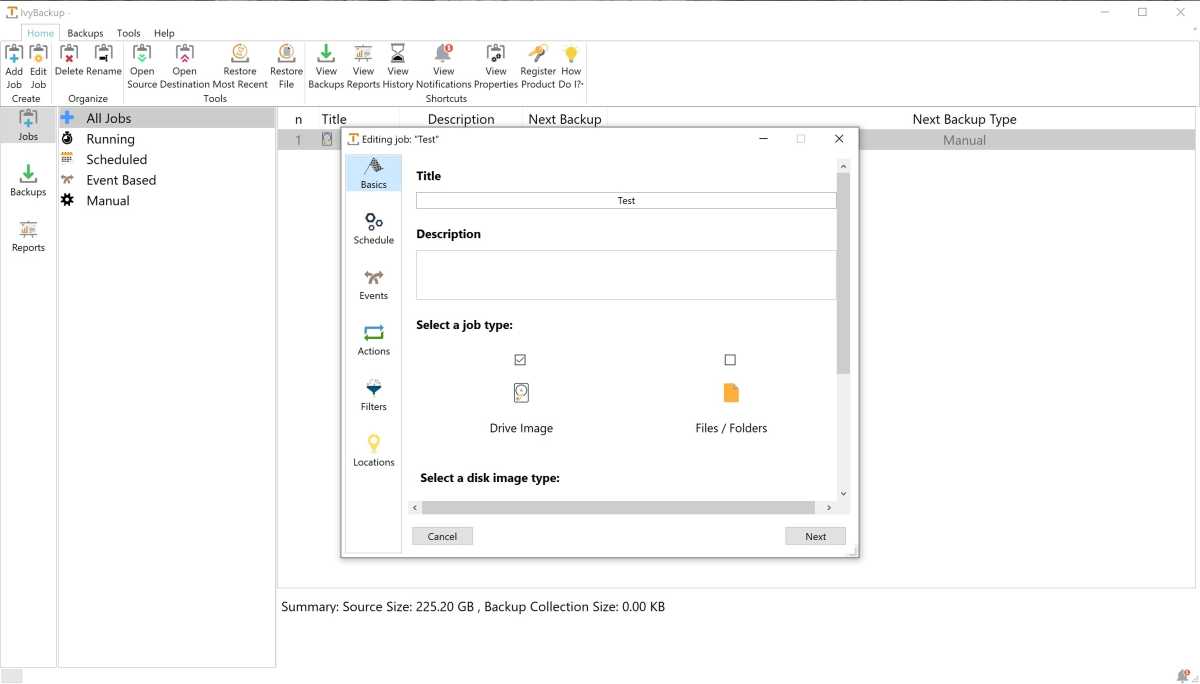 Files and folder backups may be full (everything you select), incremental (all changes to your selections since the last backup), differential (all changes in your selections since the last full backup), or mirrored. The three former are zipped, another nice nod to easy, independent recovery. The latter is a plain file copy without any container or compression so you can browse it using nothing more than Windows Explorer.

You don't need to use these facilities, as IvyBackup has a guided restore function, but they're nice future-proofing.

IvyBackup supports Dropbox, Google Drive, and pDrive as secondary locations for backup (another feature I love). Sadly, it doesn't support One Drive, the service I use. It does, however, support FTP/FTPS/SFTP, which can be handy, and you can also use any network location.

The major normal backup options are all present: scheduling, filters, pre- and post-backup actions, command-line functions, plus logs and reports you'll hear more about in a bit.

Interface and ease of use

I like the clean look of IvyBackup, though I don't love the mismatched font sizes or overall approach used in the main window. There are too many icons and labels, plus you're needlessly forced to jump back and forth between home, job, backups, reports, etc. I find the object-oriented approach—where there's a task, and all the immediate actions are available a single location—quicker and more intuitive. 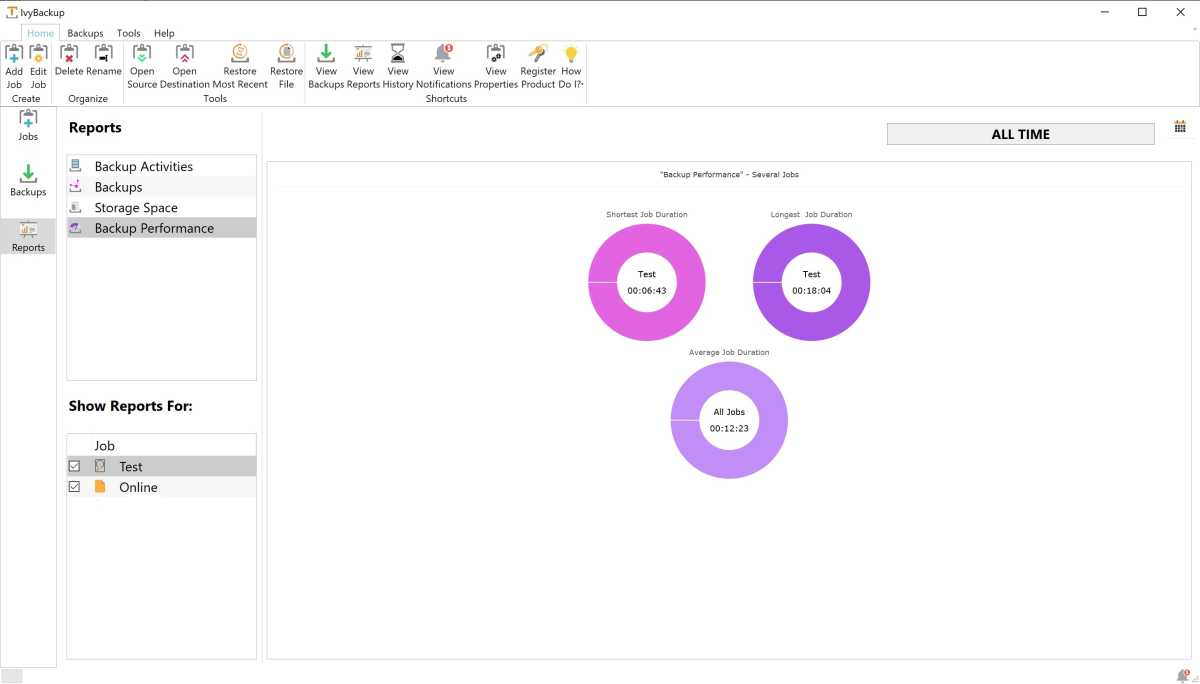 IvyBackup's interface is clean looking, though a bit more cluttered than it needs to be. Shown here is a performance graph taken early on in testing.

The dialogs on the other hand, step you through the backup-creation and restore processes nicely. Once you're used to the program, it's no big deal, but IvyBackup's main interface could be more efficient.

There were also some minor visual flaws. On my 5K display with Windows scaled up, dialogs were the wrong size to begin with, and didn't remember my adjustments. You can scroll their contents, but the constant tweaking became frustrating quickly. Also, after cancelling a backup, the icon on the taskbar didn't update for quite a while, showing it still running.

Most users running more common resolutions and scaling won't encounter these issues, but they are something developers should check for.

The file and mirror backups I set up all succeeded quickly and without any fuss. However, two attempts to image my C drive failed for no apparent reason. The program just quit the process with no error message and the report seemed to think everything had gone off without a hitch.

Neither did the more detailed PDF log files offer any clue about the failures. The specified backup file simply didn't exist. 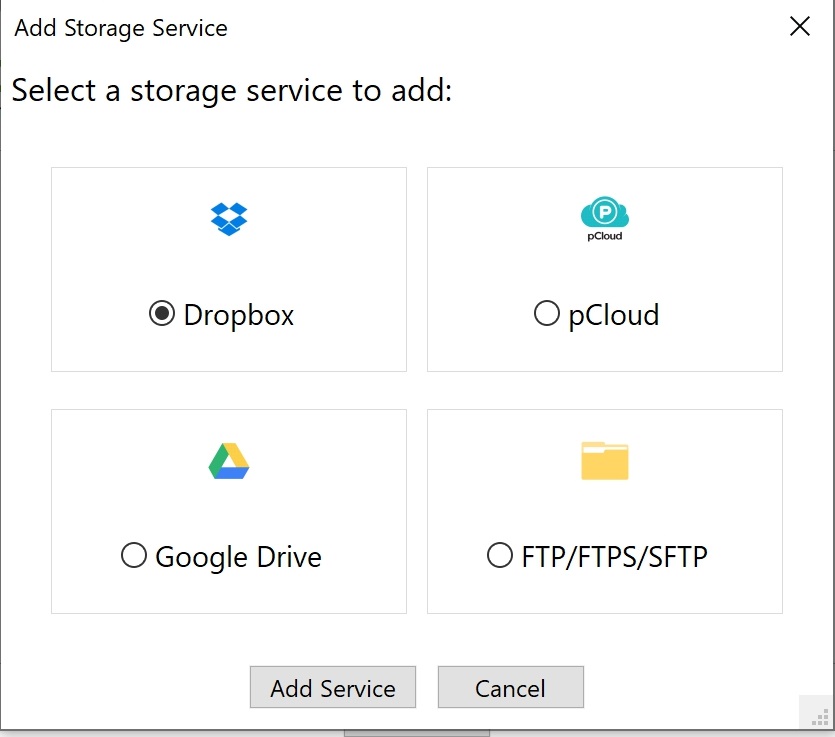 A bit of experimentation revealed the issue. The 500GB partition I was attempting to image had approximately 250GB worth of data. I assumed that IvyBackup would default to imaging only the data-laden sectors and that the 400GB of free space on the drive I was backing up to would be adequate. Such was not the case.

A third attempt and subsequent runs using a destination with 2TB of free space were successful. Successful, yes—the VHDX file was a whopping 670GB in size, significantly more than twice the amount of data I wanted to back up. It does, however, appear that the program's imaging routine works just fine—if you have enough space for the resulting VHD/VHDX file.

It's likely that the copy is raw, sector-by-sector, whether sectors contain known data or not. If that's the case, this could be handy for data recovery of deleted files, etc. But it does eat up large amounts of storage capacity. I saw no option to change this behavior.

Bottom line: Allowing the user to select a destination that doesn't have enough space for a backup is a no-no. Not informing the user post failure, or even recognizing the failure, makes for a negative double-whammy.

While IvyBackup was eventually successful in all test operations (given proper manual calculation of space requirements), backup programs, for obvious reasons, should demonstrate bulletproof programming. IvyBackup currently doesn't. Add that to the rather steep price tag, and this version of IvyBackup is tough for me to recommend.

I hope the developers straighten out these issues, as non-proprietary containers and dual local/online destinations are great basic features. They might also consider lowering the price. We'll take another look if there are significant improvements.