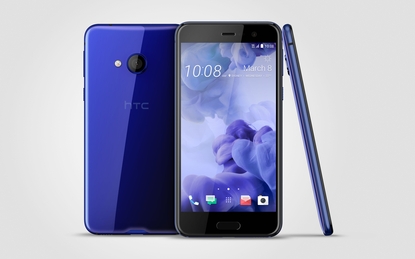 The HTC U Play is less divisive than its big brother. It's easier to use, does everything well and represents great value. It's also one of the prettiest phones ever made.

We reviewed HTC’s U Ultra flagship phone a few months ago and found it to be a frustrating device. It looked stunning, it had some nifty features, but it was oversized and made a poor use of space. Now here’s the slightly-lesser HTC U Play. It’s smaller, but otherwise looks the same. The specs are slightly lower but the price is significantly less. It all amounts to a very different package. So should you buy it?

The U Play looks just like a small U Ultra which means it’s probably the prettiest phone ever made. Our review unit was metallic blue but it also comes in pink and black. The one annoyance is that the camera protrudes out the back meaning the lens will get rubbed every time you set it down (if you're not careful).

With just(!) one 5.2-inch screen, the Play is significantly smaller than its oversized, dual-screen, big brother which was hard to wrap your hand around and felt especially chunky in the wake of the new 18:9 form-factor slim phones; the LG G6 and Samsung Galaxy S8. This one is much more comfortable to hold and operate one-handed. Indeed, it’s only 5mm wider than the S8’s ‘bezel-less’ screen compared to the Ultra’s 12mm-wider girth.

Of course the Samsung manages to squeeze in an extra 0.4-inches of screen real estate thanks to its slimmer form factor, but we didn’t feel we were missing out on much on this 16:9-ratio Full HD unit. The screen itself is very bright, colurful and sharp despite using LCD (rather than AMOLED) technology. It’s not Ultra High-resolution but this won’t trouble casual users and we (correctly) expected it to help with battery life.

The Octa-core processor might be a nominal step down from the Snapdragon used in the Ultra but, frankly, we were hard pressed to tell the difference. Having come from using top-end phones like the U Ultra, LG G6 and Samsung S8 recently, this didn’t feel slower than them. Games played smoothly too.

There are only two buttons: a volume rocker and ‘serrated’ power button on the top-right side. It might sound silly, but after using a bunch of different phones lately, the simplicity of this design works very well – our fingers always fell to the button we wanted and so we rarely pressed the wrong one. It’s also worth noting that we struggled a bit with the small ‘soft’ buttons beneath the screen of the Ultra. There was so much space next to the fingerprint reader on that phone that we regularly had to jab several times to connect with the buttons' activation spot – that’s not an issue here.

The fingerprint reader itself is at the bottom of the screen and is responsive and very quick at unlocking the phone regardless of the angle that your finger lands on it. Frankly, it proved to be a refreshing change from the more-haphazard S8's biometric locks.

The Android version is currently 6.0 but we expect that to change. We'd like to see Google Assistant arrive sooner rather than later as the Sense UI "Assistant" - which spams you with unhelpful non-local suggestions is more annoying than useful.

Nonetheless, it’s the best-looking phone we’ve ever seen, it’s comfortable to use and hold and it’s fast too. So far so good.

Another difference compared to the Ultra is the absence of HTC’s BoomSound system which provides 24-bit audio capabilities. In truth, we didn’t miss it as the standard output here was impressive but hardcore audiophiles may do so. However, the system which tunes earbuds and headphones to the shape of your own ear canal is still there. We’re not entirely sure how this works and we only have HTC’s word that it makes things better. But it’s there.

What isn’t there is a standard 3.5mm audio jack. This awful trend needs to stop as not having a standard feature is not a feature. HTC does include a decent USB headset to connect to the USB-C port at the base, but most people will lament the omission.

The built-in speaker is mediocre but gets quite loud. When playing music there’s very little bass and treble gets tinny quickly. There’s very little punch overall. However, audio is distinct and it’s usable for conference calls and general voice operation.

The main camera is generally a good all-rounder. Both it and the front camera are 16-megapixel units. In good lighting, it’s fast and accurate when focusing plus images are neutral and crisp. There are times when it will struggle to focus on what you want it to – mainly when movement is involved – but tapping the screen fixes things quickly.

In harsh lighting conditions (very bright sun) it did very well thanks to decent High Dynamic Range performance. In low light, while it’s some way behind the likes of the Samsung Galaxy S8 and the Google Pixel XL, it can capture some impressive detail so long as motion isn’t too prevalent.

The selfie camera also utilises 16-megapixels but can be set to a reduced-resolution, low-light (called ‘Ultrapixel’) mode if desired. There’s also a decent ‘Make-up’ mode which applies some impressive air-brushing filters.

The Optical Image Stabilisation is especially noticeable in movie mode as we saw when walking around our office: our footsteps were smoothed out impressively. It still wasn’t in the league of Sony’s 5-axis OIS but was still better than most. Audio was captured clearly and impressively.

The maximum resolution is 1080P but the results did feel a bit soft and lacking detail. It’s usable but we’ve seen more-detailed imagery elsewhere.

Focusing was generally fast and accurate but if a long-lens focus-pull was required we had to tap the screen to help it along. In low light it impressively picked up detail at the minor expense of grain. It’s just a shame that HTC has limited movies to 30 frames per second as it can manage more than this.