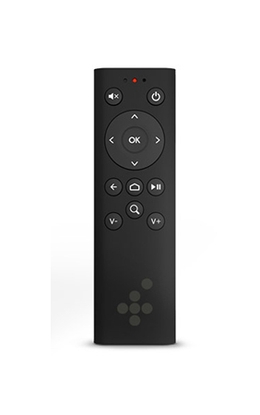 Even if the absence of Netflix makes it hard to recommend without reservation, this still feels like a box you’re going to want to invest in if you’re already a Foxtel Now subscriber.

After a string of muddled efforts, Foxtel’s latest attempt to move in on the SVOD audiences is here: the Foxtel Now streaming box. Boasting a strikingly simple design and clean interface, it feels modern in a way that Foxtel has previously struggled to achieve.

As such, even if the overall package does succumb to a number of shortcomings, it still feels like a significant step forward for the brand and as close to a must-have as you’re going to get if you’re already engaged in the the company’s rebranded Foxtel Now streaming service.

The Foxtel Now box also boasts Bluetooth 4.1 connectivity and a remote control (connected to the box via the aforementioned Bluetooth).

In terms of design, this feels like a confident leap forward for Foxtel after the now-nixed iQ3. It’s clean, rounded and shaped like something you’d to expect to see in Apple Store. These strengths are emboldened by the simple black design, which all-but-ensures it’ll sit snug alongside and play nice with the rest of your home entertainment kit. At least to the eyes.

When it comes to the software side of things, it doesn't play quite as nice. Still, I was surprised just how refreshingly different Foxtel’s approach to content management is in comparison to the recently launched second-gen Telstra TV.

Like the Telstra TV, everything is broken out into tabs. However unlike Telstra’s box, the Live TV and streaming are firmly segregated into their its own sections. In addition, the former is displayed via a vertically scrolling list - which can often make it a bit tedious to actually find what you want. This problem is compounded by the iffy free-to-air integration.

We wired the Foxtel Now box up in the exact same setup that we used to test the Telstra TV but found that the box just wouldn’t pick up certain free-to-air channels.

As far as 4K functionality goes, it works. However, it does come with the caveat that Foxtel’s own streaming service actually doesn’t offer 4K quality content (more on this issue later).

Given the caveats, it’d feel overly generous to give the Foxtel Now anything but a passing-grade. Setting up the Foxtel Now is easy enough. Likewise, it’s pretty easy to use for the most part.

However, everyday navigation of the Android-TV based UI feels just slow enough to irate. Much like the Telstra TV, it’s sluggish enough to be an outright pain should you make the wrong selection and have to back out of menus. These gripes are handily compounded by the reality that the Foxtel Now’s ability to let you access other streaming services can a little convoluted and frustratingly limited at-times.

Foxtel’s own streaming content is easy to dive right into - not to mention great in terms of the quality of that content (it’s still the only Australian streaming service with access to HBO content - which still counts for a lot) However, at this stage, Stan and the Google Play store are the only options on the table when it comes to actual 4K content. As we mentioned before, the Foxtel Now streaming platform only offers up to 720p quality video.

Theoretically, you could circumvent these limitations using the box’s 4K Chromecast functionality to access ultra high definition Netflix or Amazon Prime content.  However, Foxtel say that this functionality has actually been delayed. Regardless, compared to the simple click-and-go Netflix button on the Telstra TV and others, this feels like a clear weak link in the experience.

Though the comparisons to Telstra’s own streaming offering are easy to make, the two products actually act as weird mirrors to one another. The new Telstra TV fumbles on 4K but integrates free-to-air with aplomb. In comparison, Foxtel’s Now’s free-to-air capabilities are quite iffy but ChromeCast functionality and access to the Google Play store add value that’s not present in Telstra’s effort (which is also a little more expensive).

Even if the absence of Netflix makes it hard to recommend without reservation (Foxtel say that it and Amazon Prime will eventually come to the box) this still feels like a box you’re going to want to invest in if you’re already a Foxtel Now subscriber and haven’t already picked up (or aren't willing spend extra on) the new Telstra TV.