Steps, distance, pace, track, heart rate, this thing can do it all 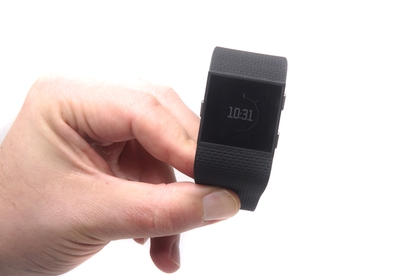 The Surge is the cream of Fitbit’s crop of fitness tracking devices. It’s a relatively large smartwatch which incorporates a ton of features that make it do more than just track steps and elevation. In particular, it has GPS, and it also includes a built-in heart rate monitor that works using optical technology.

You can record your steps, distance, elevation, pace, track (on the map), and heart rate, all without requiring any additional equipment such as your phone, or a strap for your chest, and it’s a highly convenient all-in-one device in that respect.

The watch itself is chunky given that it houses so much stuff, and it looked immediately uncomfortable when we pulled it out of its packaging. You are instructed to wear it in a way so that it’s flush on your skin for the heart rate monitor to work. To Fitbit’s credit, the watch didn’t feel all that uncomfortable when we wore it for our activities. It sat well balanced on the wrist, and its band felt smooth and soft. However, until you get used to it, it can be inconvenient to wear it full time. We took it off when sitting at our desk.

All of the functions running at the same time will deplete the battery in the Surge rather quickly. We found that we had to charge it roughly every three days (recording one one-hour activity per day) when the indicator got down to a small shade on the screen, but it gave longer life when we disabled the heart rate monitor. A full charge took about 1.5 hours via a USB cable that needs to be plugged into the back, rather than a dock. In this way it’s a little fiddlier to charge than watches such as Garmin’s Vivoactive.

Setting up the watch requires that you have a Fitbit account to pair it to, and a wireless connection to a computer can be made via a supplied USB-based Bluetooth dongle -- it’s separate to the charging cable. The entire process involves downloading Fitbit’s Connect software, plugging in the Bluetooth dongle, and then plugging in the device to charge it and pair it with your account. The screen on the watch confirms the pairing process by displaying a series of numbers that need to be confirmed in the software. It’s a lot of steps, but it all worked smoothly for us, and, most importantly, on the first go.

Using the watch to record activities entails pressing on the button on the left, and swiping on the screen to either select ‘run’, or ‘exercise’ and then choosing your activity. You can either tap on the screen or press the bottom button on the right to select things. The activities are hiking, weights, elliptical, spinning, yoga, and workout. The screen for each workout shows you which functions of the watch will be recording data when you start the activity. Interestingly, there is no ‘walking’ activity, meaning you will have to use ‘hike’ when going on walks.

We found the layout of the interface simple, and the watch was responsive when it recognised our swipes and taps. It’s not a large touchscreen -- the viewable area is a 21x21mm square -- and the way the stats fill the screen sometimes made us wish it was slightly wider.

A backlight comes on automatically when you tap or swipe on the watch, but this is a function we weren’t happy with. We’d prefer the backlight to be activated by a dedicated physical button instead. That said, the left menu button does turn on the backlight when pressed, but it takes you away from the screen you want to see.

One of the things we love about the main screen of the watch is that it shows you how active you’ve been during the course of an hour. A series of dots lights up for every minute. The more dots that are stacked up per minute, the more active you’ve been. If you look down and only see one dot for each minute, that means you’ve been inactive for too long. It’s a feature that’s true to the roots of Fitbit; that is, giving you hints, and perhaps motivation, to move more.

All of your recorded data can be viewed in the Fitbit Dashboard interface via the Fitbit Web site or through the app on your phone, including recorded activities and your heart rate. Just make sure that you have the most up-to-date version of the app installed on your phone, otherwise you won’t see heart rate or logged activities. Furthermore, only the latest version of the app will allow your phone to sync with the watch via wireless means.

Performance was good overall, with the watch giving almost the same stats in multiple categories compared to our benchmark device, the Fitbit Ultra. You can see our comparison between these devices below, when they were working side by side throughout the course of an active day (the Ultra in our pocket).

The GPS on the Fitbit Surge found satellites in relatively quick time. It basically gave us a good overview of the track we took, but when we looked at the maps on some recorded activities very closely, the track didn't follow the road exactly. It often showed us walking on the wrong side of a road or well in from the road and footpath.

Distance comparisons with the Garmin Vivoactive showed the difference between the units to be 300m over the course of a 10km walk, even though the maps for both looked largely the same (including start and end points). That said, we like the look of the Garmin’s maps a lot more than Fitbit’s. Fitbit’s maps are less detailed and this is perhaps what causes tracks to look off.

As for the heart rate monitor, it recorded our activities with a complete data-set throughout, suggesting it never failed to bounce light properly off our wrist as we moved (and rested). For those of you who want the convenience of a heart rate monitor, but dislike the idea of wearing a strap, then it’s a good option.

We’re happy with the overall performance of the Fitbit Surge in our tests, and think it’s a sportswatch that deserves serious consideration for the functions that it harbours.

That said, we think it's a watch that could use some tweaking; mainly, its Web Dashboard interface isn’t all that intuitive -- it often bounces you out into an old-style view when you look at activities -- and its maps aren't all that detailed. Also, the backlight implementation could be better, and we would appreciate a mode called ‘walk’ rather than ‘hike’, for those of us who are city walkers.