Just might be the most desirable Windows notebook on sale 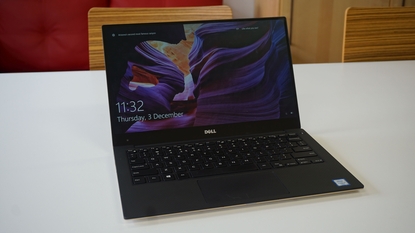 Take the ultrabook concept, refine it as much as humanly possible and the end result will be Dell’s XPS 13. This notebook tells the story of the people who worked on its development; a story about ambition, devout work and perfectionism.

It is told in both the small and big parts of the XPS 13. Take the body, for instance, which has an outside carved from a single aluminium block. It feels sturdy, looks striking and is resilient to scuffs and scratches. When the XPS 13 is closed, it is encased in the most tasteful suit of armour.

The base of the notebook wears a metallic nameplate. On its own, it would be a design piece, but its presence is necessitated by Dell’s desire to hide the barcodes, serial numbers and miscellaneous information that would otherwise discount the XPS’ appeal. That’s the extent to which Dell tried to preserve this notebook’s good looks, to the point tiny, unreadable print cast to the underside of the computer had to be hidden further by a plate of 'gold'.

Just as much pride has been invested in its interior. The palm rest is made from carbon fibre because it is rigid and a poor conductor of heat. Working this XPS hard at most will leave the palm rest feeling warm. The material is kind on skin and its subtle weave imbues the XPS with distinct character. Then there’s the screen.

The screen is the embodiment of pushing a technology as far as it can go. The display in the XPS 13 runs almost to the utmost edge of the notebook’s body, eating into the dead space formerly reserved for the bezel, quite literally pushing the screen to the notebook’s boundaries. Dell’s website states it is a 13.3-inch display fitted to the body of an 11-inch notebook.

And what a screen. It is sharp with a 3200x1800 resolution and a high 267 pixel-per-inch density — that equates to 5.7 million pixels. These pixels are well backlit at up to 400 nits, and the use of an IGZO IPS panel provides wide 170-degree viewing angles.

All of this means the ultrabook is as suited to watching movies as it is creating Excel documents. Speakers, situated towards the base’s apex, are deceptively powerful, enough so to handle movie playback, YouTube videos and music. People serious about their multimedia will still value having a fixed speaker setup that this computer could connect to when it rests on a desk.

Working on the XPS 13 feels less like work, partly because the display breathes life into the most mundane of tasks, but also because its keyboard and trackpad are benevolent. The chiclet keys are backlit, well spaced and have enough travel to make a long day of work comfortable. Beneath it is a glass trackpad versed in multi-finger gestures. The two work well with Microsoft’s Windows 10 operating system. Those who fork money out for the top-tier XPS 13, which is the model being reviewed by PCWorld, can also make use of its touch display.

Connectivity is a strong point for the XPS 13. It boasts dual-band Wi-Fi 802.11ac and Bluetooth 4.1 for wireless connections, and a solid portfolio of physical connections with two USB 3.0 ports, a thunderbolt port and a card reader; the kind that leaves part of a full sized SD card poking out.

Dell offers the XPS 13 in a variety of configurations. Introducing models come with a lower resolution Full HD display that is not a touchscreen. Pricing starts at $1529 for a 6th generation Intel core i5 processor, 4GB of RAM and a 128GB solid state drive.

Our testing revealed the XPS 13 is a notebook ideal for office tasks, including emails, web browsing and the creation of documents. This is a notebook designed for people who work on the go, more than it is a notebook for people using Adobe’s creative suite or AutoDesk’s CAD software.

Rendering the popular ‘ring’ demo in our Blender 3D test took 2 minutes and 51 seconds, which was 8 seconds faster than the Surface Pro 4 and even 5 seconds quicker than Microsoft’s Surface Book.

Storage transfer speeds were on point for an ultrabook. The XPS 13 averaged sequential write speeds of 825MB/s and sequential read speeds of 312MB/s, which places it ahead of HP’s EliteBook Folio and Asus’ ZenBook, but behind Microsoft’s Surface range and Apple’s MacBook Air.

Gaming isn’t the core competency of Dell’s ultrabook, but it’ll take light gaming in its stride. Most XPS 13 owners will settle for the growing number of gaming titles found in Microsoft’s application Store. The notebook scored well in 3DMark’s benchmarking tests, with results including 5898 in cloud gate, 3283 in sky diver and 852 in firestrike. Its performance places it in contention with Microsoft’s Surface Pro 4.

A notebook intended for use out of the office is one in need of long lasting battery life. PCWorld’s battery test involves disabling power saving modes, setting the brightness to max, enabling Wi-Fi and looping a Full HD movie until it runs flat. The XPS performed commendably by lasting 6 hours and 42 minutes before being drained; a score that is only 10 minutes behind that of Microsoft’s Surface Book.

Another battery test is being performed following an update released by Dell to the computer’s BIOS. Company representatives claim the battery should last even longer. This review will be updated with the new results.

The XPS 13 is not a hybrid. It doesn’t bother trying to be a tablet and a notebook. That is messy work, often laden with compromise and mediocrity. The bottom line is the best of hybrids are forced to settle and the XPS 13 doesn’t settle.

Every part of this notebook has been geared to getting the most performance from the smallest possible footprint. It is a joy to the senses, with the cut of its finish, the vibrancy of its display and the compassion of its keyboard. It is among our favourite products because it’ll help the student, the stay at home mum and the businessman tap into their potential.