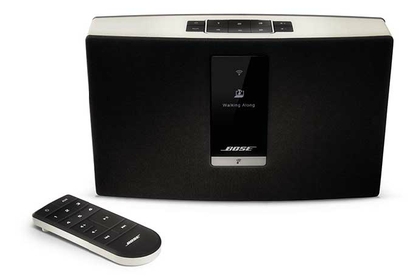 The Bose SoundTouch Portable Series II is a speaker that’s designed to be integrated into your wireless network, rather than connect to a device directly using Bluetooth. It’s a portable speaker, it can work in a multi-room environment with other speakers, and it doesn’t shun physical controls. Most impressive, though, is its sound quality: it can produce a boom and fill a room.

The SoundTouch speaker needs to be connected to your wireless network before you can use it, and you’ll have to download the requisite Bose SoundTouch app in order to facilitate this process (and use the speaker in general). We downloaded it onto our Samsung Galaxy S5 Android-based smartphone for our tests, but there is also a Windows desktop app, and, of course, you can use this system in the Apple ecosystem, too (via AirPlay).

The media servers part is important. The SoundTouch app isn’t highly featured when it comes to the ways you can play music. In the Apple ecosystem, you can play music off an iPhone, iPad, or iPod Touch. But if you have an Android phone or tablet, you can’t play music directly off that device. Instead, you have to set up shared libraries on your network in order for the SoundTouch app to find your music. This includes iTunes and Windows Media libraries, and you must make sure those libraries are on computers and devices that available whenever you want to listen to music from them.

It’s more convenient to use a shared music library that’s located on a network attached storage (NAS) device, and this is primarily how we tested. We set up a Plex media server on our Asustor AS-202TE NAS device, added our music to it, and then played it back through the app. This worked very well for us. Windows Music libraries on our laptops could also be added to the SoundTouch app, but we could only listen to them when the laptops were on.

Streaming services are limited to Spotify, Pandora, and Deezer, and there is an Internet Radio feature that allows you to tap in to quality streams such as those from Digitally Imported. The 1.6in display on the front shows you the name of the station when you are listening to an online stream. We used the Internet Radio feature a lot, but we are disappointed that the app doesn’t support more streaming services, such as Rdio, or even Google Play Music (though this speaker is designed with more of an Apple iTunes bent).

Since it’s a portable speaker, that means there is a battery inside. You can take it to any part of your home that’s within reach of your wireless network, including your balcony or backyard, but you can’t use it outside of your home as a travel speaker (it’s not a Bluetooth speaker that can easily connect to a phone and play anything, it requires infrastructure to work). We managed to get almost six hours out of the speaker when running it at 50 per cent volume, and this lines up with Bose’s stated running time of 2.5 hours at maximum volume.

Despite being a small unit of about 25cm long, 7cm deep, and 15cm high, the speaker is capable of putting out a big sound that will easily fill a mid-sized room. Bose doesn’t quote the power of the drivers, but we’ll go as far as saying that if you live in a small apartment, it will probably be all you need for your listening pleasure. Most impressive is the bass, which often sounded rich and long-lasting during our tests, and it didn’t drown out the other frequencies, meaning there was a wonderfully full and well-rounded output, especially when we listened at 50-75 per cent volume -- any louder than that and the speaker lost most of its bass response. If you find the bass to be too overpowering, then you can adjust it in the app’s settings for the speaker.

All of the musical genres that we tried sounded good on this speaker. From hip-hop and electronica, to rock and folk music, from trance to classical. The sound was well balanced from the bottom to the top, and vocals were heard with clarity and accurate tone. As mentioned, though, the level of the volume played a part, and best results were achieved below 75 per cent volume.

The small size of speaker means you can place it almost anywhere in the home. It can go on a bookshelf, or it can even fit in an open-design TV entertainment unit. You have to bear in mind that there are control buttons at the top of the speaker, though, so you have to leave some clearance in order to access these.

In addition to the power and volume buttons, the buttons include six pre-sets. These are a cinch to use, and are especially useful for storing your favourite albums or Internet radio stations. To store a pre-set, all you have to do is hold down the button for a few seconds. Then you can use the numbered buttons to access the stored music in an instant. If you store pre-sets from your local libraries, then the pre-set will start playing the music from where you left off -- not just the track of the album you were in, but the exact moment of the track you were in.

The physical buttons are great for when you don’t have your mobile device to hand in order to select and start playing music, though you can also use the app to access and store pre-sets.

While we really like the overall quality of the sound and the size of this Bose speaker, it’s not a speaker that’s ideal for all situations. You need to set up libraries in order to play music, or be firmly entrenched in Apple’s ecosystem of devices. Furthermore, streaming services are limited, and so is file support (there is no support for FLAC files, for example, perhaps due to the speaker’s Wi-Fi module only supporting up to 802.11g rather than 802.11n, according to the manual).

It can work as part of a multi-room speaker set up with other Bose speakers, such as the bigger SoundTouch 20 and SoundTouch 30 models, which can all be controlled from the same SoundTouch app and play the same or different music.

• The Divoom Voombox-Travel is a rugged Bluetooth speaker than can be used outdoors.