Billion's 7800NXL has a built-in ADSL2+ modem, but it can also be used to distribute 3G or 4G mobile broadband connections 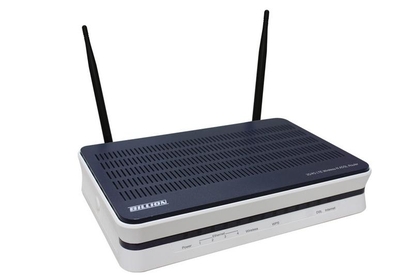 With a built-in ADSL2+ modem and support for mobile broadband, Billion's 7800NXL should appeal to those of you who are looking for simplicity and constant uptime, especially for a small or home office. Its 2.4GHz Wi-Fi was fast in our tests, and the unit overall proved to be very reliable.

You don't get the current fastest wireless networking standard with the Billion BiPAC 7800NXL, but what you do get is a reliable ADSL2+ modem-router that can also make use of 3G and 4G mobile broadband modems. It's fairly simple to set up, it has a good array of features and reporting, and it's quick. It just looks a little old-fashioned.

Physically, the Billion is a large unit with lots of room to ventilate its internal components. There are soft green status LEDs on the front, while the back has two external, removable antennas, an ADSL2+ line port, a USB port, and four Gigabit Ethernet ports, including a Gigabit Ethernet WAN port, which can be used to plug in a cable or fibre modem.

Because an ADSL2+ modem is built in, setting up the Billion isn't hard. Simply plug in all your cables, fire up a browser and head to 192.168.1.254. Enter the default admin credentials and click on the 'Quick Start' option. It's true to its name: just enter your ISP login details and you'll be online in a jiffy. It took us only a couple of minutes to get online from the moment we booted the router, and the setup also included wireless networking name and encryption settings.

Because the Billion doesn't have dual-band networking, it probably won't be a sought-after unit by those of us who require the flexibility of dual-band networking, but its simplicity should appeal to anyone who just wants a no-nonsense wireless router for the home or a very small office. Its range is as good as other 2.4GHz routers we've tested, but its speed was a little better in our tests than many routers we've reviewed in the last few months, including Billion's own 7800VDOX. That' potentially due to Billion claiming the newer router uses a more powerful Broadcom controller chip, and the router overall, including its Web interface and settings changes, were very quick to respond to changes.

We tested wireless performance in a real-world setting by transferring movie files from a wired PC to a Dell laptop running an Intel Centrino Advanced-N 6300 wireless adapter, from distances of 2m and 10m. In the 2m test, a transfer rate of 9.28 megabytes per second (MBps) was achieved, while in the 10m test, it managed a transfer rate of 9.1MBps.

The fastest router we've seen in this test, is still Western Digital's MyNet Central N900, which got 13.55MBps from 2m and 14.5MBps from 10m, but the Billion's showing is nevertheless very good, and it shows the virtue of using the 2.4GHz network over mid-to-long range distances in a typical home or small office — in many cases, the speed won't deteriorate dramatically. That said, it will depend on your environment and how many sources of interference and obstacles there are for the signal to overcome.

It's a downer that this router doesn't have dual-band support though, especially for its price of $199, but if you want dual-band operation, there are other routers out there that will serve you, including the 7800VDOX mentioned previously, which has a retail price that's about $50 more (that router also has built-in VoIP functionality), and even Netcomm's N900, which is more similar to the 7800NLX in that it also offers support for 3G or 4G mobile broadband USB sticks, which can be used in the event that your main ADSL2+ connection goes down.

To use a 3G or 4G connection, all you have to do is plug in a mobile broadband modem to the 7800NLX's USB port. The 3G connection can be used as a failover, and this worked as promised during our tests without us having to configure anything. When we unplugged the phone line from the router's DSL port, the Internet continued to work through our Optus-based (via an iiNet SIM) 3G dongle — albeit with a slight delay as it connected. It then reverted back to the ADSL2+ connection when we plugged the phone line back in.

The router's Status page can show traffic for both LAN and WAN traffic, so you can keep an eye on what's going on with your Internet connection at any given time. It's especially handy to leave open if a mobile broadband connection is being used — the two WAN connections are colour coded so that you can easily see if it's ADSL2+ (red) or mobile broadband (green) that's being used.

The same USB port that can be used for 3G can also be used to share a printer, or to share media from a USB hard drive over DLNA. We found that hard drives didn't actually show up on the Windows network, so we weren't able to drag and drop files off an attached drive, but a plugged-in drive's contents were visible and playable through Windows Media Player on computers and through television interfaces using DLNA. We had no problems streaming video files off a test hard drive to a test TV over 10m away from the router.

Other features of the Billion BiPAC 7800NLX include a built-in firewall, support for IPTV, QoS and it also has keyword and domain name URL filtering (as well as IP filtering). It's a solid wireless router overall, and even though it may not support dual-band operation, it's still a router worth considering if you want very good 2.4GHz performance and good reliability.

Because it has an ADSL2+ modem built in, it's a relatively neat and easy unit to set up, and its 3G capability can come in handy (especially if you run a small office) in case that main connection ever goes down. It could stand to be a little more attractive as far as physical design is concerned, and its price seems a little steep, but we still think it's a very good unit.