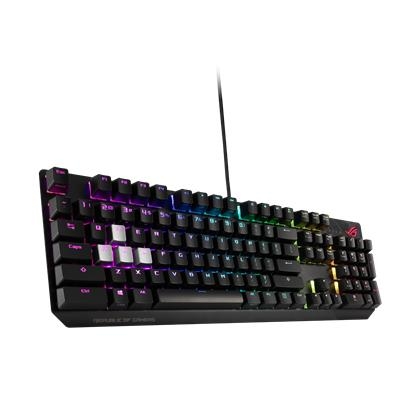 The ROG Strix Scope is a good keyboard, with a higher price-tag than all but the priciest of gaming keyboards out there. And even if does a few things very well, it doesn’t do enough to ever fully justify that high cost.

Ultimately, the thing that sets the ROG Strix Scope apart from the other options is obvious.

But this is the best one out there that relies on ASUS’ proprietary AuraSync RGB lighting tech. And if that’s what you’re after, the Strix Scope will deliver exactly that.

[Related: Which RGB Lighting system is the best for gaming?]

If you’re got any other AuraSync gear on hand, it makes a strong case for itself. Otherwise, there’s not a lot going on here that you won’t find elsewhere.

What did we like we about the ROG Strix Scope?

To start off, the layout of the ROG Strix Scope doesn’t stand out - but it doesn’t transgress any of the rules of good keyboard design either. There’s minimal wasted space plus plenty of extra functionality via the extended left control and stealth keys. Neither of these are super-useful in isolation, but if the idea of a wider left Control key, or the ‘stealth’ key (which immediately hides all currently running apps from prying eyes) is of interest, it might be.

Read more Computex 2019: ASUS show off their concept motherboard of the future

There’s also an RGB-enabled ROG logo on the top right of the unit, which can be customised using the usual software. Given that AuraSync integration is the reason to pick this keyboard over the other options, I really dug just how many options ASUS have given users here when it comes to both key switches and lighting.

As noted in the specs section of this review, the ROG Strix Scope comes in five different varieties of Cherry MX: Red, Brown, Blue, Black, Speed Silver and Silent Red.

What didn’t we like about the ROG Strix Scope?

While it’s nice to have plenty of options when it comes to the kinds of key switches you want inside your ROG Strix Scope, the reality is that you can find those same switches in countless other keyboards. Unlike something from Razer or Logitech - who have both recently invested into offering their own proprietary key switches - the Cherry MX hardware inside the ROG Strix Scope is hardly exclusive.

In some ways, the key switches here are arguably worse than the competition. If you’re reluctant to convert from Cherry MX just yet, they’ll probably be exactly what you’re looking for. However, having now spent time with both Razer’s Switches and Logitech’s Romer-G switches, having to rely on CherryMX again felt like a step backwards. As always, your individual mileage may vary.

I also found myself wishing that the ROG Strix Scope had a proper volume wheel. Yes, there are shortcuts built into the function keys that do exactly that - but I suspect that a slider or a wheel would be a more intuitive solution.

Overall, the experience of using the ROG Strix Scope is a noisy but effective one. However, AuraSync aside, there’s little here that justifies the high price. HyperX’s Alloy FPS is almost half the price, more defined in its character and every bit as technically competent. If anything, that’s the biggest weakness here.

The ROG Strix Scope is a good keyboard, with a higher price-tag than all but the priciest of gaming keyboards out there. And even if does a few things very well, it doesn’t do enough to ever fully justify that high cost.