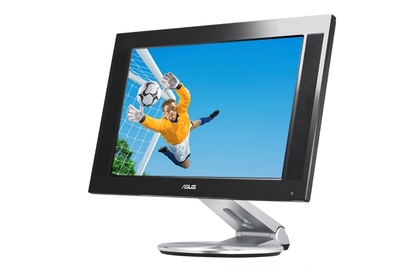 Despite its limitations, this monitor is compelling because it has very good contrast. We think its best use is for watching DVDs.

Asus is looking to differentiate itself with its 19in widescreen LCD monitor, the PW191. And the industrial design of the PW191 is definitely eye-catching: a black bezel surrounds the screen, while a silver base props it up, allowing it to swivel and pivot.

The monitor's controls are also out of the ordinary. They are based on a feather-touch design, rather than being physical buttons. To activate them, you simply rest your finger on the label and hope that it gets recognised. Unfortunately, in our tests we found the buttons did not always work. It took a lot of time before we could properly calibrate the monitor with DisplayMate.

As for colour reproduction, the monitor relies on a 6-bit LCD panel, which means it does not have the capability to reproduce all of the colours that your graphics card can output. As such, dithering is used to create the colours that aren't in its palette. Despite this limitation, tests using colour scales were accurate, with no shift in hues, and our test photographs looked rich and vibrant. While most photos were well-detailed and looked great as they shone through the gloss-coated panel, the lack of brightness meant that photos with shadows and dark areas were not well defined.

For gaming, the monitor has a pixel response rating of 8ms, but we did notice a lot of ghosting in our text-scrolling tests.