Acer has added a touchscreen to its 11.6in Chromebook, but what's it good for? 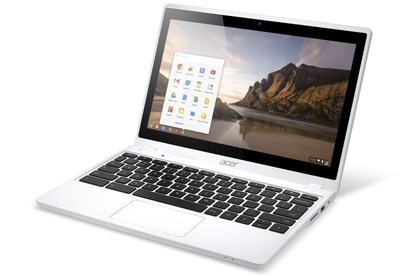 Acer has been quick to add a touchscreen to its Chromebook line up, but there's not much you can do with the touch capability at the moment. If nothing else, it adds some much needed good looks to the Chromebook C720 series, and the C720P is still a solid model to consider overall, but the retail price is $100 more than the non-touch C720.

Acer’s C720P (full name C720P-29554G01aww) is essentially the same Chrombook as the C720 that we reviewed back in November 2013, but it adds a touchscreen to the mix. It’s claimed by Acer to the first Chromebook with a touchscreen, and, if nothing else, it gives the C720P better overall looks than the C720, while perhaps not adding much to the overall usability of the product.

Does a Chromebook need a touchscreen?

Having a touchscreen on a Chromebook at the moment is more of a case of “if you build it they will come” rather than something that can be used effectively straight away. The touchscreen can be used for tapping on objects (such as selecting music in Google Play Music), swiping to go back and forth in Web pages, and perhaps playing games (such as Angry Birds), but you can’t use it for much more than that. Or, you could use programs such as Sketchpad and a third-party stylus to draw pictures, but the hinge design restricts use to the clamshell form factor, rather than letting the unit turn into a tablet.

It’s not supported by an on-screen keyboard straight out of the box, but you can try out some third-party options from the Chrome Store. We primarily used the Chrome Virtual Keyboard extension, which allows you to type into text fields in Web pages — the keyboard comes up automatically and then disappears once you are done. However, it can’t be used to enter URLs in the address bar of the Chrome browser. You can use this on-screen keyboard to enter login credentials, and to enter search terms in Google, but since the real keyboard is right there in front of you, an on-screen keyboard in this situation is more of a novelty than a useful tool.

Usability questions aside, we do like the addition of this touchscreen to Acer’s Chromebook, primarily because it gives a little more style to the design and makes it look like a more impressive piece of gear (and you pay $100 more as a consequence). We were down on the C720 Chromebook for looking like just another boring laptop (though we liked it overall), but the edge-to-edge finish of the touchscreen, and the white finish that Acer has chosen for the entire body surrounding the screen and the keyboard, really add to the aesthetics and make the C720P a more vibrant model overall.

Of course, we will complain that the screen is too glossy now, as reflections can be bothersome when using the C720P in a well-lit environment. Since it’s a relatively small 11.6in screen, a bit of tilting should do the trick to get most reflections out of the screen’s view, and turning up the brightness will help, too, but dark photos and dark scenes in movies will still be affected by light sources behind you.

What about the rest of the Chromebook?

Apart from the touchscreen, the Acer C720P Chromebook offers the usual configuration and user comfort that we experienced in the C720. It’s powered by an Intel Celeron 2955U Haswell-based CPU, has 2GB of RAM, and storage is taken care of by a 16GB solid state drive (SSD). It supplied similar scores to the C720 in the online benchmarks that we ran:

It was capable of handling Full HD YouTube videos, and we could also use it to stream video from services such as NBA League Pass.

We used a local video file stored on the SSD to test the C720P’s battery life, looping that video with maximum screen brightness until the laptop ran out of puff. It lasted 5hr 43min in this test, which is about 40min less than we got with the C720. You should be able to get more life than that if you just use the Chromebook for basic Web browsing and social media, with the screen brightness at about half way, and also if you don’t make heavy use of streaming video.

The weight of the C720P is 1.3kg, and this is 100g heavier than the weight we recorded for the C720. Since the hardware configuration is the same, the extra weight comes from the inclusion of the touchscreen. Like the C720, you also get two USB 2.0 ports, a headset port, and a full-sized HDMI port. A webcam is present, and you get dual-band Wi-Fi, as well as Bluetooth. There is a full-sized SD card reader on the right side that can be used to access memory cards, but cards don’t fit all the way inside this slot and instead extend out from the chassis (it is the same as the C720 chassis after all).

The Acer C720P is a capable Chromebook for accessing all the services that Google has to offer, and you’ll get the most out of it if you already make use of Google’s ecosystem of products. The idea of the Chromebook is to work primarily in the Cloud, using Gmail, Drive, Docs, and other online services, but you can also set Drive and Gmail to synchronise with your local storage so that you can work offline. However, since the focus is on Cloud and the ability to access your data anywhere you have a Wi-Fi connection, you also get free 100GB of Google Drive space that you can use for two years.

With the way Chrome OS is currently laid out (basically as a Web browser), you can’t do much with the touchscreen except try out a few games or experiment with any other apps and extensions that you might find in the Chrome Store. At the moment, the touchscreen is not a must-have feature, and, in any case, you are still restricted to a clamshell form factor and can’t use the device as a tablet.

• Which Chromebook should i buy? Acer, HP, Samsung, and Toshiba reviews