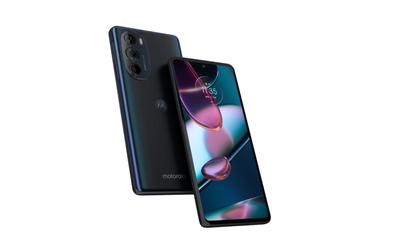 Motorola has announced its new flagship smartphone, the Motorola Edge 30 Pro, will be available on March 31 2022 in Australia, with pre-orders already underway at JB Hi-Fi and at select retailers.

Looking at the list of features on offer though, we'd think you'd probably want to launch a game or two on the Edge 30 Pro as a first priority, since it comes packed with features for gaming performance and responsiveness. Motorola says its gaming prowess is powered by Snapdragon Elite Gaming software and a rearchitected Qualcomm Adreno GPU that provides 30 percent more power and 20 percent more efficiency than previously.

Among other benefits, these optimisations should boost the colour-rich HDR graphics on the Edge 30 Pro's large 6.7-inch OLED display, which is a decent size for mobile gaming. Being a mobile device, we only hope the display is bright enough to play in all kinds of lighting conditions.

The Edge 30 Pro's display also features a 144Hz refresh rate, which is even faster than the 120Hz on offer in Samsung's new flagship Samsung Galaxy S22 Ultra, so we're expecting the display to be pretty smooth and responsive. Playing over Wi-Fi or downloading a new game to the handset should also be quick thanks to Wi-Fi 6E, which is a little faster than the vanilla Wi-Fi 6 you'll find in other handsets.

Gaming these days being the full sensory experience that it is, Motorola has also catered for sound quality by adding support for Dolby Atmos audio and Snapdragon Sound - audio features that should muster as much oomph as you could expect in a smartphone.

If you're more into photography than gaming, the Edge 30 Pro's cameras look quite good too. On the back you'll find dual 50MP main rear and ultra-wide cameras that Motorola says will allow you to fit 4 times more scenery into each frame. A 60MP selfie camera is provided on the display side for taking ultra high-resolution selfies. Video can be captured in HDR10+ with 8K resolution.

The Motorola Edge 30 Pro comes in one colour: Cosmos Blue. You'll be able to pre-order it before March 30 2022 for AU$999. If you pre-order, you'll also receive a Lenovo Smart Clock with Wireless Charging Dock (valued at AU$109). More details can be found at Motorola.