Intel Alder Lake to offer a non-hybrid version and AVX512, too Intel is planning to offer an 8-core version of its hybrid Alder Lake chip—without efficiency cores—and will apparently offer AVX512 support too, according to a developer guide released by the company.

The news of a performance core version, or P-core only model without the efficiency cores, is a bit of a surprise as Intel has had no hints of offering versions without the E-cores. It also makes you wonder just where an Alder Lake chip without E-cores—e ssentially removing the hybrid component—slots in. Are they lower-cost, clock-limited versions, or are they specially tuned chips aimed for very high-clock speed applications where having more cores doesn't matter? That's something we'll have to wait for more information on, but that wasn't the only surprise.

The developer guide also revealed that Intel will indeed offer support for AVX512 after all on Alder Lake. Intel officials had previously said would be permanently disabled on the Alder Lake consumer chips.

The guide, however, contradicts that, saying the much-maligned AVX512 would continue on. Sorta.

AVX512 is disabled on P-cores when E-cores are enabled because AVX512 is not supported on the current E-core architecture. It is ultimately up to the Original Equipment Manufacturer (OEM) whether the option to disable the E-cores is exposed in the Basic Input/Output System (BIOS), the software guide says. And yes, Intel referred to it as BIOS, so shake your fist at the clouds, UEFI fans. 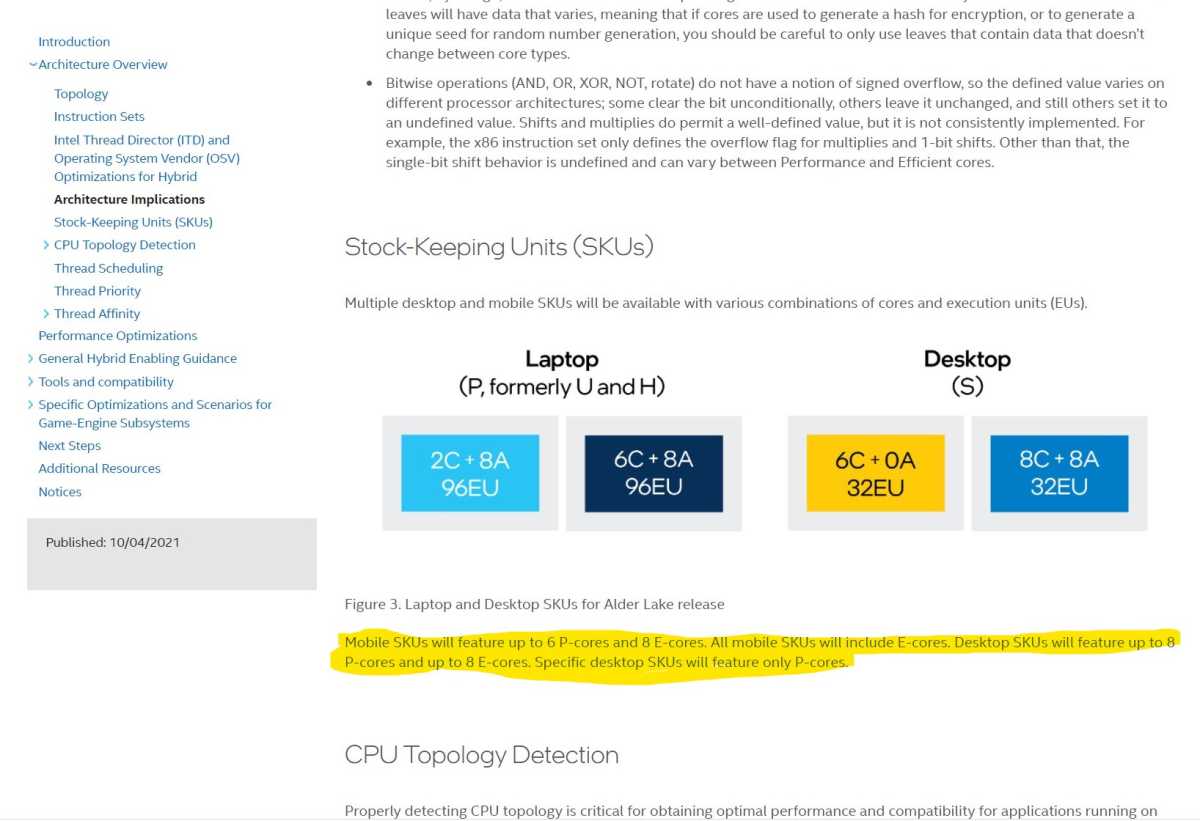 Intel just revealed a non-hybrid version of the 12th gen Alder Lake is on tap.

Written by Philipp Gerasimov, Marissa Du Bois and Leigh Davies (all three of whom work as graphics and game engineers at Intel), much of the guide is aimed at game developers and gives examples of where developers should want to take advantage of the E-cores and the P-cores. Part of that advice is for developers to write games that don't try to hammer all available cores in a CPU just because those cores are there.

Testing has revealed that some legacy software can show a performance inversion as you increase core counts, the software guide says. This is not an issue specific to Alder Lake, but more of a scalability challenge. As the number of threads increases, so does the overhead of managing them.

If there isn't enough work for the threading system, the overheads can become greater than any benefit derived from increased work distribution. Developers shouldn't naively scale to the available core count on the system, but instead scale to the point where benefits decrease below a threshold decided by the programmer. This allows the OS more opportunities to manage hardware resources, parking unused cores and diverting power to the parts of the system that need it, potentially increasing frequency.

Some will say this is Intel telegraphing a weakness of its new hybrid design, but the paper does shed a little more light on how Alder Lake will perform in gaming.

Analysis of games on hybrid architectures has shown the majority of games perform well, with older, or less demanding, games favoring the Performance cores. Games that were already built to heavily utilize multithreading, and that can scale to double-digit core counts, were found to benefit from hybrid architecture due to better throughput. However, there are inevitable performance inversions, attributed to either poor multithreading game architectures, poor OS scheduling, or increased threading overhead.

The guide recommends that developers basically keep their libraries and development tools updated to get the best out of Alder Lake.

Intel said for titles where there is no optimization, its Intel Thread Director will try to dispatch work to the proper P-core or E-core. But the guide also admits there can be times when tasks aren't assigned to the right core.

What does this all mean? We're probably in for some surprises when Alder Lake is released with some games screaming and some leaving us with head-scratching results.