A new report outlines Apple's ambitious plans for its earbuds. 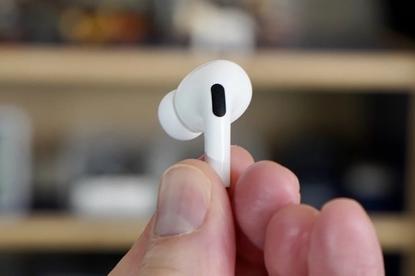 Apple's AirPods may currently dominate the wireless music industry, but Apple has much bigger plans for its tiny earbuds. According to a new report in The Wall Street Journal, Apple is exploring a variety of health features for future versions of AirPods that will turn them from headphones into health devices.

The Journal reports that Apple is studying three ways to bring health features to AirPods. The first is enhancing hearing, which would likely be an expansion of the current Conversation Boost and Live Listen features. Apple released the new AirPods Pro feature, which pinpoints and amplifies sound coming from people talking in front of you, in early October. The Journal says new FDA regulations that permit the sale of a new class of cheaper hearing aids direct to consumers to treat mild to moderate hearing loss could allow Apple to market AirPods as hearing aids.

Far more ambitious would be a new feature to take wearers' core body temperature from inside their ear. According to documents reviewed by the Journal, Apple is looking to add a thermometer to the AirPods similar to the rumored skin-temperature sensor on the Apple Watch. Traditional tympanic thermometers use infrared sensors to measure temperature, but it's not clear how Apple would incorporate such a sensor into the AirPods.

Finally, Apple is also looking to monitor posture and ergonomics. The Journal reports that the feature would lean on the motion sensors in the earbuds and alert wearers of slouching and to improve their posture.

New AirPods and AirPods Pro models with new designs have been rumored for many months, but the Journal says these features aren't expected by next year. In the meantime, Apple is holding a second fall event next week that will likely bring new Macs. It's not clear if AirPods will be released as well, but rumors have suggested they could launch at any time. New AirPods Pro with a stemless design are due to arrive in 2022.