The A15 is plenty fast, but its true power is versatility Last week, Apple announced the new A15 processor in a peculiar way: by comparing its new chip to the Android competition, rather than the A14 that powered last year's generation of iPhones. We were all left to try to infer the speed of the A15 based on Apple's claims, and wondering if the company was obscuring the performance improvements in the A15 because they weren't particularly impressive.

In the past week, things have gotten a lot clearer. Tuesday brought the first reviews of the iPhone 13 and iPhone 13 Pro and on Wednesday we got a look at what the iPad mini has to offer. Now we've got the cold, hard facts about the A15—and it's more complicated and interesting than I guessed last week. The net result? Apple is making one chip but using it in three different ways, and while some aspects of the A15 upgrade aren't particularly exciting, others are quite impressive. Systems-on-chips made at a scale of five nanometers are complicated. Who knew?

The A15 is a product line

Just as Apple is showing how many variants on its chip architecture it can produce (whatever is powering the rumored MacBook Pro models expected next month, it'll be something we've never seen before), it's increasing how it varies its chip usage on iOS. Since Apple never comments on these things, we're left to speculate, but my guess is that some combination of chip yields and individual device design needs have led it to deploy its single A15 chip in three different configurations on those three devices.

The new iPad mini uses an A15 processor like the iPhone 13, but it is underclocked and has one fewer GPU. Image: Apple

This is very like Apple. Viewed one way, the company is outrageously extravagant, making an entirely new chip design every single year that is only ever used in Apple products! The decadence! But viewed another way, the company is using all parts of the buffalo: one core chip design is deployed in different variations across its product line, with fewer GPUs here, a lower clock speed here, and in a variant scaled up with more cores for higher-end systems over here.

Since the new MacBook Pro models are rumored to have slipped from a planned summer introduction, it's likely that they'll be based on the A14 design that also powers the M1 processor, which is why I expect they'll be called something like M1X. But the A15 is here now, and I'd expect it to be scaled up to power an M2 processor in 2022's lower-end Macs and iPad Pro models, as well as a scaled-up M2X processor for higher-end offerings.

Apple's bespoke chip design may be extravagant in the moment, but by the time the company is done with a design, it's wrung every last bit of efficiency out of it.

The real gains in the A15

Okay, let's get down to it. While the A15 is faster than I feared last week, it's definitely a smaller upgrade than what we've seen in the last few years. While the last four processor upgrades averaged a 20 percent speed boost in single-core performance, on my scorecard the A15 is only about 11 percent faster than the A14. And in multi-core performance, the speed gains are even more meager–about 4 percent, compared to average gains of around 22 percent every year for the past three. 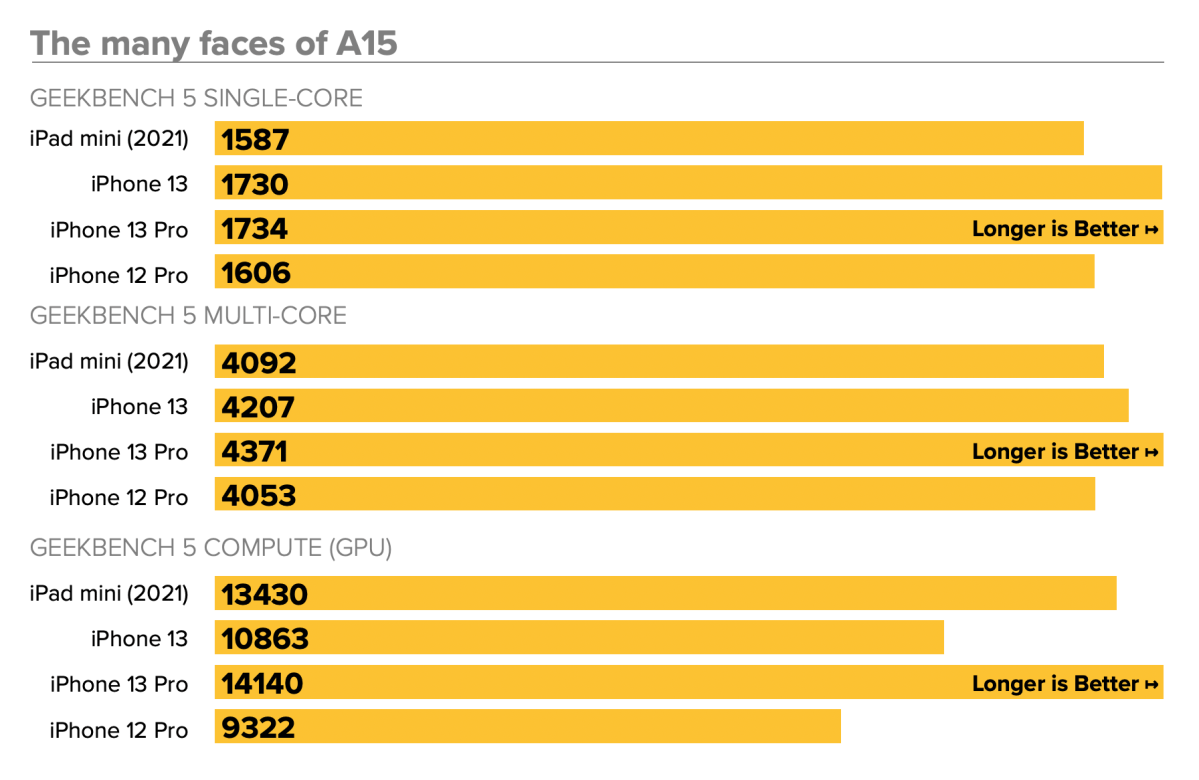 But there are benefits to the A15 that go beyond the CPU core speed. First off, the graphics processor in the A15 is a big upgrade. The iPhone 13 Pro scored 50 percent better than the iPhone 12 Pro in GPU-based tests, and even the reduced four-core GPU in the iPhone 12 offered a 16 percent speed boost.

And of course, there's the improved battery life. It's probably impossible to pick apart all the reasons that the iPhone 13 line made a big leap forward in terms of battery life—from the Pro models and their variable-refresh display to new cellular modems and bigger batteries—but I've got to think that the A15 is also contributing improved energy savings.

Eyes on the prize

Over the last few years, Apple's chip engineers have spoiled us. The incremental gains they've made on raw CPU core performance were impressive, and this year's gains just don't quite measure up to that standard.

But as I keep saying, things are more complicated than that. Most tech upgrades are not on an annual basis, so those gains compound and so a year that's a little slower paced gets washed into years that were more impressive, and boom, your new phone is twice as fast as your old one. The CPU cores are also not the sole component of device speed. There are GPUs, the Neural Engine, and even media encoders and decoders that can contribute to overall performances. Apple's made a lot of strides in those areas lately.

Finally, there's the bigger picture: Apple's chip operation started by making an iPhone chip. Then it made a more-cores variant for the iPad. Then it updated that more-cores variant so that it would also run macOS. It's about to release an even-more-cores variant to serve the needs of professional Mac users. And the much, much higher-end needs of Mac Pro users will also need to be addressed.

There's just a lot more going on. The A15 is only the start of that story. I'm looking forward to seeing what the next year brings.