In uncertain times, one thing is for sure: Apple makes a lot of money. 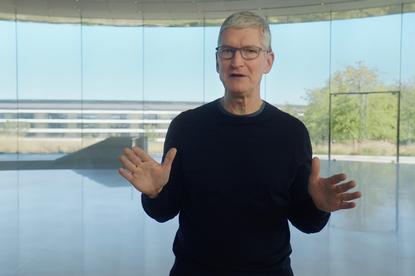 Among the things Wall Street likes are growth—always growth—and certainty. This past year has provided a lot of uncertainty, both in life and in business. And while Apple has done well over the last year—its latest financial results included $81 billion in revenue, the best third quarter in the company's history—it's also been uncertain about its future.

Once again, Apple's executives have declined to forecast the company's results for the next quarter. However, they were willing to predict that it would see very strong double-digit year-over-year revenue growth that will be lower than this quarter's year-over-year growth rate of 36 percent. (That's actually some guidance, albeit of the broad variety; it means next quarter's revenue will be between $71B and $88B.) But overall uncertainty remains, about the progression of the COVID pandemic, about foreign exchange headwinds, about increased shipping costs, and most notably about whether Apple will be able to get enough component parts to make iPhones as iPhone season approaches.

Here are some of the more interesting things that I noted in Tuesday's results and the post-results conference call that Apple CEO Tim Cook and Apple CFO Luca Maestri hold with a bunch of Wall Street analyst types.

In the wake of the COVID pandemic, Apple has put up some shockingly good financial numbers. As I've detailed here this past year, Apple has seemed almost sheepish about doing so. Analyst Katy Huberty of Morgan Stanley thought she'd ask Cook and Maestri directly about the issue: There's a debate in the market around how much Apple benefited from the pandemic… was your business helped or was it hindered? Great question, but a thorny one for Apple's executives, because the last thing you want to do is get quoted as gloating about how great a worldwide disaster has been for your shareholders. I think Maestri handled it well.

We do know that on the positive side of the ledger, obviously, especially during the periods of extreme lockdowns, digital services did very well because entertainment options were limited. And so obviously our digital services did really, really well. Obviously, with more people working from home, more people studying from home, we know that iPad and Mac demand was very, very strong, Maestri said. He pointed out that some services (advertising, AppleCare) were hurt by the pandemic, and some of its more complex products–namely the iPhone (which requires carrier contracts and comes in numerous sizes and colors) and Apple Watch (which really requires a try-on for band sizing, colors, and materials)–were harmed by not being able to be bought in-person by people in stores. 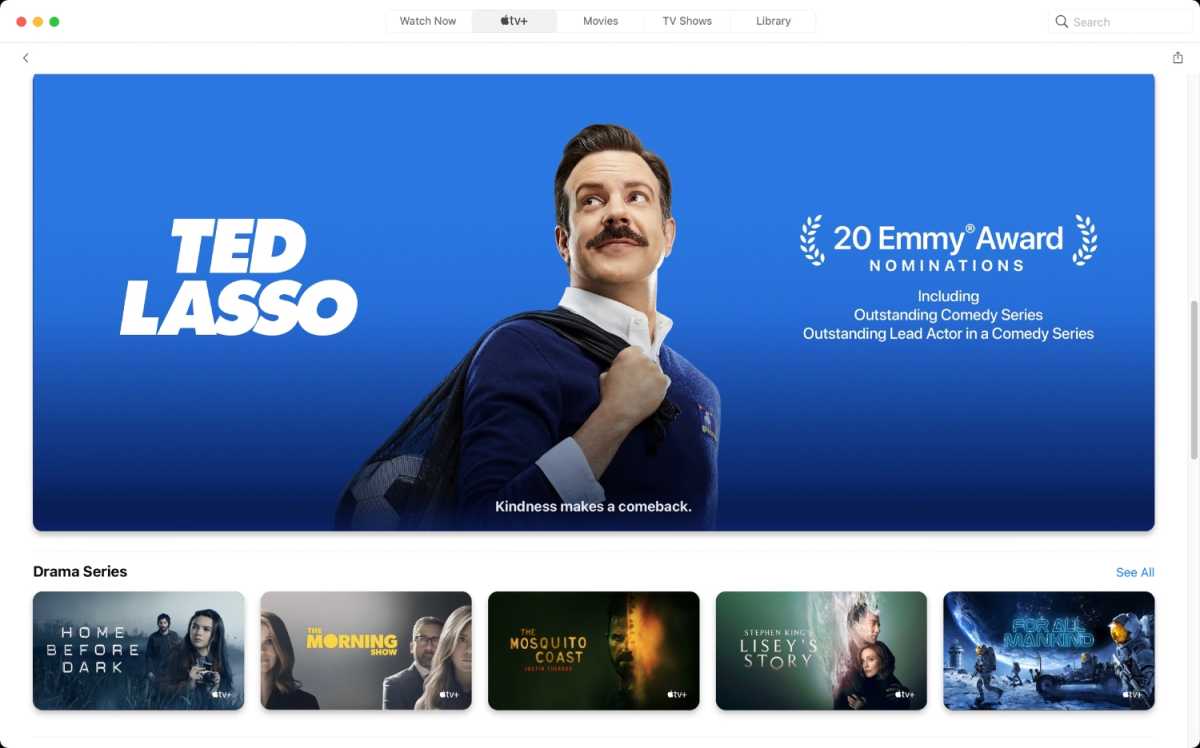 But Maestri also pointed out that it's hard to tell exactly how the world has changed, especially since Apple can't make enough iPads and Macs to fulfill demand. The reality is that maybe the ‘new normal' after we exit COVID may be different from the past… maybe there's going to be hybrid models around work. Most importantly, though, he pointed out what we're all probably thinking: I can certainly tell you that we're all looking forward to a COVID-free world. I think that that would be very good for us and for our customers as well. Amen to that.

As I mentioned, Apple reported strong supply constraints on the iPad and Mac during the quarter. Essentially, it couldn't make enough of them to meet demand. The good news, according to Maestri, is that Apple was able to mitigate some of those constraints during the quarter, so they were able to make more Macs and iPads than they had expected.

Now the bad news: Apple thinks that it will be even more constrained next quarter than it was this quarter. And while the iPad will continue to be constrained, the Mac won't be. instead, it will be Apple's crown jewel, the iPhone.

If you're thinking to yourself that this sounds like very bad news for the quarter in which Apple traditionally unveils the iPhone, I would agree! But even if Apple announced new iPhones in September as it traditionally does, that doesn't mean they'd necessarily go on sale until October, which is the beginning of Apple's holiday quarter. And even if they did go on sale at the end of September, the bulk of iPhone sales are likely to come in the holiday quarter.

As for the reasons for the constraints? Cook said that while there were some cases where demand for Apple's products had been so great that Apple itself was caught off guard, most of the constraints were due to an industry shortage of common parts, or as Cook likes to say with his supply-chain jargon, legacy nodes. Those legacy nodes will get you every time.

The M1 chip is a hero

The Mac set an all-time third-quarter record, and as Maestri pointed out, the last four quarters of Mac sales are the four biggest Mac quarters of all time. And Maestri laid the credit entirely to the very enthusiastic customer response to our new Macs powered by the M1 chip, including the new M1 iMac, which was introduced during this quarter. 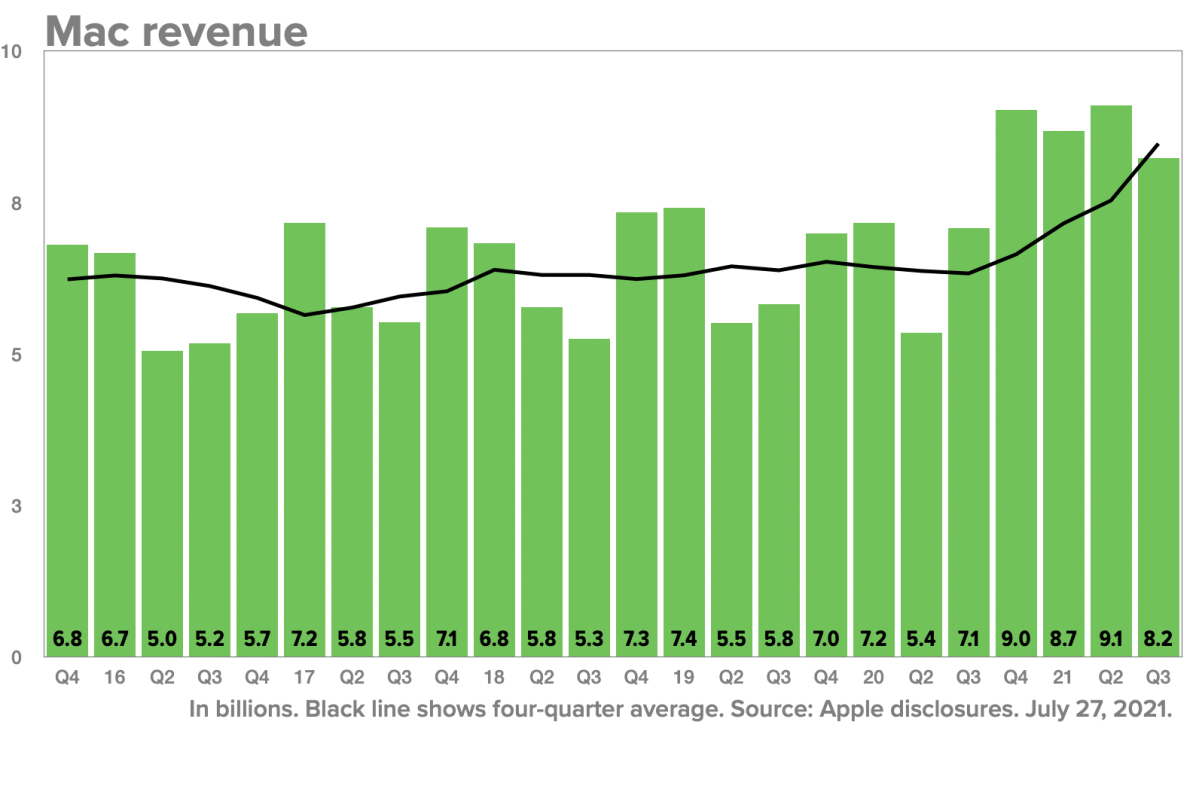 Likewise, Maestri and Cook attributed the iPad's strong sales to the arrival of the M1 iPad Pro. The iPad has reached sales figures not seen in a decade, almost matching its sales peak in its very earliest days, and all that in spite of significant supply constraints, according to Maestri.

Services is a monster, thanks to the installed base

Apple's Services revenue line grew by 33 percent year-over-year, a staggering amount of growth even by its own standards. The Services line has grown sequentially for every quarter for 16 straight quarters. (Keep in mind, most of Apple's product lines have a seasonal ebb and flow, which is why it's best to compare them to the same quarter the previous year. Services just grows every single quarter.)

In part, that growth just shows the power of having a subscription relationship with a credit card on file. But it's more than that. As Apple keeps pointing out, the company's growth is not limited to upgrading users but includes an awful lot of people who are new to its products. (75 percent of Apple Watch sales were to first-time Apple Watch buyers. In China, that number was 85 percent, and two-thirds of Mac and iPad buyers in China were similarly first-timers.)

This is all part of Apple growing its installed base, which is the number of overall Apple devices that are in use. If all Apple did was sell replacements, its installed base would be stalled. It would be a zero-sum game, but it's not. Maestri reported on Tuesday that Apple's installed base of devices reached an all-time high across each geographic segment, and that the number of transacting accounts and paid accounts on its various digital content stores also reached a new all-time high. Paid subscriptions were up to 700 million, which is 27 percent higher than they were a year ago. 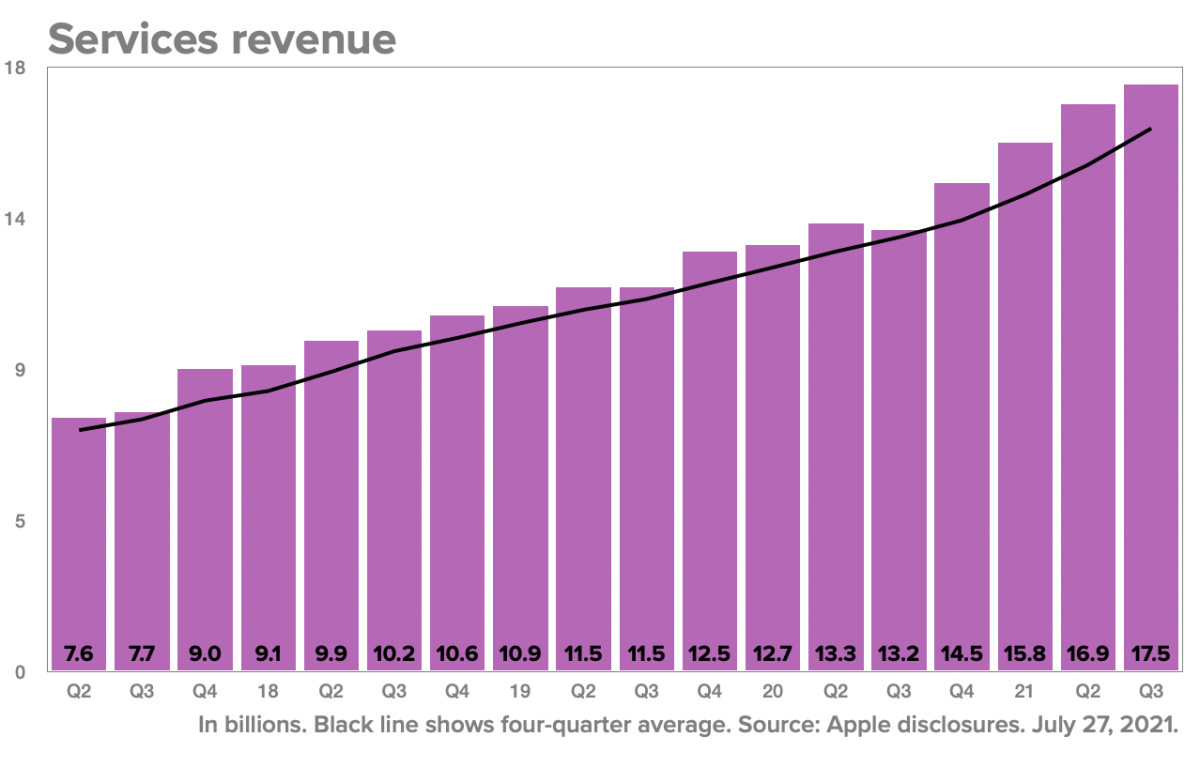 And that, friends, is why—despite everything–Apple keeps generating record revenue, quarter after quarter. Apple's installed base keeps growing, and not only is that business quite profitable on its own, every sale fuels a services machine with even greater profit margins. In a world of uncertainty, Apple making a lot of money seems about as certain as it gets.