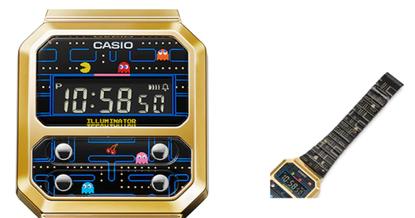 Watchmaker Casio has released a Pac-Man collaboration watch in Japan as part of a Bandai Namco Pac-Man videogame release, giving fans of the iconic 1980s videogame character a big incentive to buy the game.

The watch named, the A100WEPC, features retro styling from the original Pac-Man game and is based on the company’s recently rehashed A100 watch, which was first released back in 1978.

The new Pac-Man watch pays homage to the much-loved videogame character that was first introduced to the world in 1980 by Bandai Namco Entertainment (then Namco), including both on its band as well as its watch face.

Pac-Man was one of the most popular videogame characters in the 1980s, attracting legions of fans with its addictive and challenging level-based gameplay. In some countries the game could be played at nearly every street corner, which led to it being declared the "Most Popular Coin-operated Arcade Game" by Guinness World Records in 2005.

For styling, the new Pac-Man watch features a gold-plated case to match the colour of the Pac-Man arcade cabinet and a stainless steel band. The A100WEPC's face sports a scene from the original Pac-Man game screen, including Pac-Man’s character and orange, red, pink and blue ghosts. It also displays cherries and the iconic pink line that indicates when the game’s ghosts emerge from their nests.

The A100WEPC's band is laser-etched and displays a rendering of the Pac-Man character being chased by ghosts and a reverse of the scene on the band’s underside. In terms of functionality, the A100WEPC has a digital display, stopwatch, alarm and is water resistant. It also comes with a resin case.

Casio’s A100WEPC isn’t the first retro style Pac-Man watch we’ve seen, with other watchmakers having already piggybacked off the game’s popularity to release their own Pac-Man branded products.

In 2019, American watchmaker Timex released the Pac-Man T80 watch - a retro style wristwatch adorned with Pac-Man graphics to the US market. This watch proved so popular, the following year the company broadened its sale of the Pac-Man T80 to the global market.

The new Casio watch looks similar, albeit offering fans the experience of Casio’s own distinctive 1980s look and feel. No details have yet been confirmed about when we might see the A100WEPC in Australia and New Zealand. Casio’s website has more information.