A chance to try Android 12’s many improvements 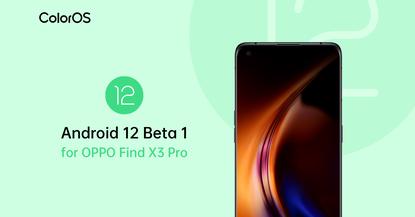 Joining the foray of smartphones now available for beta testing the Android 12 operating system is the Oppo Find X3 Pro, after Oppo announced an Android 12 Beta 1 trial on its flagship phone.

Oppo bases its ColorOS on the latest Android operating system and the move puts the company in a good position to forward engineer software developments of its next generation software, since developers will be able to try features ahead of its release.

Software developers will also be able to tinker with some of the more interesting improvements of Android 12, including much anticipated personalisation and enhanced security features. Oppo’s ColorOS already does personalisation very well, giving users the option to customise everything from ringtones to fonts, so we’ll be watching closely to see how developers integrate, or expand on, any personalisation updates from Android 12.

New privacy features in Android 12 sound quite useful and should give users more peace of mind that their phones are not compromising their safety or security. They will allow users to approximate their locations to apps instead of pinpointing their exact locations, and to block the use of their phone’s camera and microphone in quick settings. Users will also be able to make apps that have been unused for 90 days inactive.

A tonne of other new features in Android 12 focus on improvements to the user interface, including the addition of functional bars and updated operating modes. One standout feature that should appeal to gamers is audio-coupled haptic feedback support for new apps. This combines sound with phone vibrations, like you commonly see in gaming chairs, to deliver a more immersive experience.

“We are glad to have Google as a long-term partner as we have had successful collaborations over the years, working together to guarantee ColorOS keeps up with the latest version of Android,” said Michael Tran, managing director at Oppo Australia.

“Currently we have close to 400 million monthly active users of ColorOS around the world. With Android 12 we will continue our momentum to provide developers and users the most vibrant experience,” he said.

The Android 12 Beta 1 trial will be available for download via the Oppo open platform for Australia and New Zealand. Right now Oppo recommends only developers trial it since it’s likely to be full of bugs. A consumer version is on its way though, so stay tuned for more updates.