What is a teraflop? 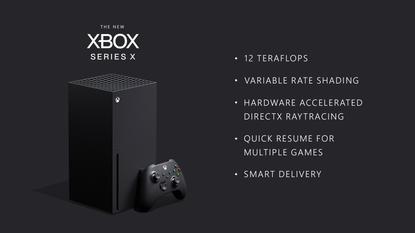 Before becoming adopted as a catch-phrase on TikTok, the term 'flop' was a short-hand for floating point operations per second.

Floating point numbers are commonly known as "real" numbers and, in the context of gaming, they're a bit more valuable of a metric than the alternative because CPUs and GPUs don't usually deal with calculations involving fixed point numbers.

Essentially - a floating points operation is a mathematical operation that involves numbers with a decimal point.

How many flops makes a teraflop?

A teraflop is a trillion floating point operations per second.

What's the relationship between teraflops and gigahertz?

The term GHz (gigahertz) as it is often cited in the context of clock speeds refers to the number of clocks a CPU achieves per seond. Since a sufficiently complex floating point operation could take multiple clocks to solve, there's not really a clean exchange rate between the two metrics.

How many teraflops did the last Xbox have?

The Xbox One X offered 6 teraflops of computational power. Assuming the upcoming Xbox Series X delivers on Microsoft's promises, that means the new console will achieve double the teraflops of its predecessor.

According to Microsoft, "Xbox Series X is our most powerful console ever powered by our custom designed processor leveraging AMD’s latest Zen 2 and RDNA 2 architectures. Delivering four times the processing power of an Xbox One and enabling developers to leverage 12 TFLOPS of GPU (Graphics Processing Unit) performance – twice that of an Xbox One X and more than eight times the original Xbox One."

How many teraflops will the Playstation 5 have?

Sony have not disclosed any specific metrics for the yet-to-be-announced Playstation 5. However, some rumors have suggested the console will tout capabilities of around 9 teraflops. If that's indeed the case, then Microsoft's console will have the edge - at least, in theory.

Are teraflops really a good measuring stick for these products?

Sort of. They're a good indicator of what these kinds of devices are theoretically capable of delivering but not always reflective of what they will deliver in every situation.

As mentioned above, having the ability to process more floating point operations increases the technical ceiling for what consoles like the Xbox Series X can achieve in terms of graphics - especially when it comes to things like ray tracing.

However, it's not the only metric that matters and whether or not enough developers are able to convert the capability of a high-FLOPS machine into real-world results to shift the needle is another question entirely.