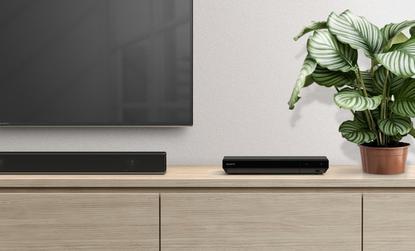 4K is rapidly becoming the industry standard for home viewing and if you haven’t already upgraded your old home theatre set up, you’re almost certainly thinking about it, especially as the end of year sales loom closer.

While there are plenty of streaming options for 4K quality, there are those of us who still like to own physical media, so that means getting a 4K Blu-Ray player.

Here things get a little thorny – are all players compatible with all TVs? How much do I need to spend for the optimal viewing experience? Will I lose out on anything essential if I go for a cheaper model? It’s okay – we’re here to demystify the whole process for you.

What is 4K anyway?

When we bandy around the term 4K, we’re really using it as umbrella to include a number of different ultra-high definition (UHD) formats: HDR, HDR10+, HLG, and Dolby Vision. All provide excellent picture resolutions of approximately 3,840 x 2,160 pixels, although there is some variance.

Pretty much all new televisions of a decent size (say 50” and up) are 4K these days and although you can use 4K content with, say, a 1080p TV really, what’s the point of that unless you’re in the middle of putting your home theatre together piecemeal? Right now, let’s assume you’ve got nice big 4K TV and are in need of some playback hardware to get the most out of it.

Why not just stream?

Fair question – after all, with Netflix, Amazon and more offering huge libraries of 4K, why bother investing in equipment and discs when all that digital content is right there, on a service you probably already subscribe to?

Well, quite simply, quality – the picture and sound quality offered by streaming at this point can’t match what you can get on a disc.  While the quality of a streamed program maxes out at a bitrate of 16Mbps, a 4K Blu-ray which can put out a bitrate of up to 128Mbps. In practical terms, that means you’re more likely to get artifacts and buffering issues when streaming – a decent 4K home set up, complete with a dedicated 4K player, mitigates this.

You’re also going to get better sound out of a disc – the Dolby Atmos you get out of streaming services is heavily compressed, and that’s really noticeable with a decent sound set up. The sound on a 4K disc is uncompressed, and on your surround sound system, you are going to notice the difference.

Why not just use your gaming console?

Well, for one thing, if you’re a PlayStation household you’re out of luck for the immediate future – the PS4 Pro lacks a UHD Blu-Ray drive, although the upcoming PS5 (due to launch in November 2020) is expected to right that wrong.

The Xbox One S and X both support UHD discs with Dolby Vision and if you’re a dedicated Microsoft Gamer, congratulations – you own a 4K BR player as almost a bonus to your gaming rig. Having said that, there are some drawbacks – although you can output Dolby Atmos and DTS: X sound, the Xbox has a tendency to treat all sound profiles as Dolby Atmos, leading to some stuttering and playback issues.

In terms of vision, colour display on the current generation of Xbox consoles is not as crisp and nuanced as dedicated players. For the average consumer, the difference is negligible, especially if you’re a gamer first, viewer second, but if you’re the sort of person who wants the absolute best possible display, this is going to bug you.

The Panasonic DP-UB9000 is your go-to if price is no barrier.

This beast retails for a staggering $1799.00 but earns every dollar. It was the first player to support all four HDR formats but the big selling point is Panasonic’s proprietary HDR Optimiser technology. As the name suggests, this optimizes each frame for the display in use, meaning you’re going to get the best possible picture for the TV you’ve got. It upscales Blu Rays and DVDs beautifully, too.

There are also plenty of bells and whistles packed in, including internet enabled smart features for easier streaming and voice control via Alexa or Google Assistant. If your budget’s tight, the next model down, the UB820, boasts many of the same features (including HDR Optimiser) at a more affordable $659.00 RRP.

The Sony UBP-X700 (Amazon), which comes with a $318.00 ticket price is probably, dollar for dollar, the best all around player for most consumers.

Yes, it’s a big step down from the UB9000’s pro-level picture and sound performance but unless your home cinema space is optimized for viewing and listening to an uncanny degree, you’re not going to notice. It supports Dolby Vision, Dolby Atmos, DTS: X, and HDR10, so you’re covered for great sound and vision, it’s Wi-Fi ready for easy streaming, and its USB playback capabilities cover most video formats so if you’re one for playing from a hard drive, you’re well sorted.

Panasonic’s DP-UB420 (Amazon) occupies a similar price and quality niche at $369.00 RRP and offers many of the same features, so your choice between the two would probably come down to which is cheaper on any given day. However, Panasonic’s next model down, the DP-UB150 (Amazon), is a good 90 dollars cheaper at $279.00, but you’re sacrificing Wi-Fi connectivity to get that discount – bite the bullet and shell out for one of the better models.

Sometimes you just need something that’ll do the job with minimum fuss and, importantly, minimum expenditure. Nothing wrong with that – if you’re not mastering a three and a half hour mob movie for Netflix, you probably don’t actually need the UB9000. Similarly, smart Wi-Fi technology is nice, but do you really need it when a few meters of CAT cable will do the job? You do not.

If all you want is the ability to spin a 4K disc and not much else, there’s Panasonic’s UB-300 and DMP-UB400GNK, both of which can be found for under $200, and, basically, they will play the discs.

When the specs are bragging about twin HDMI outputs, you know you’re getting a bargain basement model. The Panasonic DMP-UB400GNK actually has wireless connectivity so if that’s a major selling point for you, well, decision made. LG’s UBK80 (Amazon) is similarly specced but about $100 more expensive which, at this end of the tech and money spectrum, is a death sentence.

You want cheap and functional, and so Panasonic wins with what are effectively the Volkswagens of 4K Blu-Ray Players.

At the end of the day…

David Fincher probably doesn’t even own an UB9000, and the cheaper you go, the more likely there’ll be some feature skimped on that you will miss, so if you’re going to pinch pennies make sure to dig into the specs and make sure the model you’re considering does everything you need it to.

But really, the UBP-X700 sits at the perfect crossroads between cost, performance, and extra gizmos – it’ll treat you well until we’re all having this conversation about 8K in few years’ time.