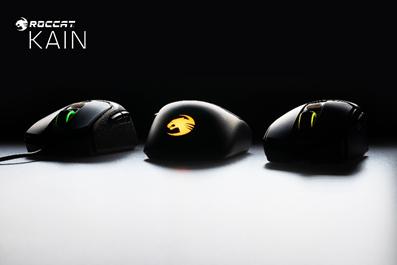 Roccat are teasing a new series of Kain gaming mice ahead of a formal E3 reveal.

The company say that their new Kain gaming mice are "born from the vision of creating a PC gaming mouse with the best “click” and aimed to deliver maximum precision performance."

Specifically, they say the new mice will introduce something called Titan Click: "a new click-mechanism engineered to unlock accurate and responsive controls."

"This faster and more precise click comes from an exclusive variant of Omron switches and software that registers the click signal up to 16 milliseconds faster than any other mice, giving the Kain a speed advantage and letting players stay one click ahead of the competition."

It's a neat hook and one that sounds very reminiscent of the Titan switches found in more recent Roccat keyboards. Roccat's Vulcan 120 AIMO uses specialized keyboard's firmware to reliably identify key stroke signals faster than much of the competition. At first blush at least, this sounds like a similar feature.

Roccat say they'll be unveiling additional details about their Kain series of products on the 11th of June.

Roccat say Kain 100 AIMO and Kain 120 AIMO will launch around September. The Kain 200 AIMO is expected to follow in the new year.

Australian pricing and availability is to be announced.