Everything we (already) know about the Samsung Galaxy S10, S10e, S10+ and Galaxy Fold 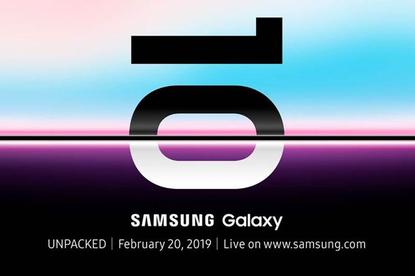 The Samsung Galaxy S10 and S10+ aren't due to be officially announced until the 20th of February but there's plenty of info about the new flagship handsets (and Samsung's first foldable) that's already doing the rounds.

Here's what we already know (or think we know) about what Samsung is announcing at their next Unpacked press conference.

According to widespread rumors (and in-line with broader moves by Samsung to debut new tech in mid-range smartphones), it looks like this year's Galaxy S10 will feature a "holepunch notch" similar to that found in the Samsung A8s (seen below).

Beyond that, the Galaxy S10 will likely feature all the usual hardware perks that Galaxy S-owners know and love. The S10 will feature a headphone jack, MicroSD slot, wireless charging, Dolby Atmos speakers, IP68 waterproofing and a 6.1-inch dynamic AMOLED HDR+ display. For better or worse, the Bixby button also looks to be making a return.

Under the hood, we expect that the new Samsung Galaxy S10 will come powered by Android 9 and Samsung's new One UI software paired up with its latest Exynos processor. If the past is any indication, the US and Chinese markets will get a version of the S10 that runs on Snapdragon 800-series CPU. The Galaxy S10 will also feature a 3400mAh battery.

According to GSMA, the S10 will be available in two storage configurations

As for the camera, the Galaxy S10 is rumored to pack a 10-megapixel (f/1.9) selfie shooter on the front and a P20-style triple-lens array on the back. The latter includes the following:

We won't know until the device is fully announced but the camera specs here suggest that the S10 will offer significant enhancements when it comes to wide-angle photography and zoom capabilities compared to last year's S9. Interestingly, it does seem like Samsung will be dropping the variable aperture tech found in the S9 and S9+.

In addition to the spec bump and camera improvements, the Galaxy S10's biggest point of difference over the S9 look to be an "ultrasonic" in-screen fingerprint sensor. Some rumors have also suggested the S10 will offer the same kind of reverse wireless charging found in Huawei's Mate 20 Pro.

As with the regular Galaxy S10, the Galaxy S10+ will feature a holepunch notch. However, as opposed to the single hole on the S10, the larger flagship device will tout two holes - one for each camera. An image of the Galaxy S10's dual-notch design (leaked by Evan Blass via Twitter) can be seen below.

As for hardware, the S10+ will feature a headphone jack, MicroSD slot, wireless charging, Dolby Atmos speakers, IP68 waterproofing and a 6.3-inch dynamic AMOLED HDR+ display. The Bixby button is also still present and accounted for.

As with the Galaxy S10, the version of the Galaxy S10+ that'll come to Australia is expected to come powered by Android 9 (and Samsung's new One UI software experience) paired up with the company's latest Exynos processor. The Galaxy S10+ will also feature a larger 4100mAh battery.

According to leaks, the S10+ will be available in several storage configurations

The Galaxy S10+ is rumored to pack a 10-megapixel (f/1.9) + 8-megapixel (f/2.2) dual-lens selfie shooter on the front and a P20-style triple-lens array on the back. The latter includes the following:

While the front-facing camera does represent a key improvement over the S10, the S10+ marks a return to the once-normal practice of Samsung offering the same rear camera kit in both its regular and plus-sized flagships.

As with the S10, the *new* features you might be getting out of the S10+ (compared to the S9+) are an "ultrasonic" in-screen fingerprint sensor and reverse wireless charging.

Last year's S9+ launched into the Australian market with a recommended retail price of $1349. We're treating that as the starting point for the S10+ but suspect the final price could go as much as $200 higher.

The Galaxy S10e is a new addition to the usual two-device S-series lineup. It's envisioned as a more-affordable version of the S10, sort-of similar to how Apple's iPhone XR is positioned relative to the XS. Leaked images indicate the device will feature the same hole-punch notch display as the S10 but boast slightly-wider bezels.

For those who want an even closer look, here's the side mounted fingerprint reader of the #GalaxyS10e... again, many more pics here: https://t.co/KQW3AKPXUD pic.twitter.com/2PNftguPEJ

Still, the 5.8-inch dynamic AMOLED HDR+ display on the S10e is nothing to scoff at. As for hardware features, all the usual suspects are accounted for here: headphone jack, wireless charging, IP68 water resistance, etc. No word yet on whether the Bixby button will make it into the S10e.

In line with the cheaper pricetag, the S10e is expected to boast more modest capabilities compared to the S10 and S10+. It'll still run on Android 9.0, Samsung's new One UI software plus the latest Exynos processor.

It'll be available in two storage variants, listed below:

The S10e is also said to feature a side-mounted fingerprint sensor rather than the in-screen one offered with the S10 and S10+. It's also been leaked that the device will boast a smaller 3100mAh battery.

The camera is the other aspect of the S10e that's a little watered down compared to its more-expensive cousins. It boasts the same 10-megapixel front-facing camera found in the S10 but opts for a dual lens solution rather than triple-lens kit found in the S10 and S10+. This includes the following:

The absence of a telephoto lens here suggests that the S10e won't be able to offer the same level of zoom as the S10 and S10+.

Word is that the S10e won't feature the in-screen fingerprint sensor found in the S10 and S10+ but it might still possess the same reverse wireless charging.  That said, the real draw for the S10e is that it's a Galaxy flagship that won't cost you an arm and a leg.

It's unclear whether the Galaxy S10e will come to Australia. However, if it does, we expect it to sit slightly below the price-tag for the regular S10. Our prediction: it'll be around AU$999.

The Galaxy Fold is set to be Samsung's first foldable flagship device and the company are keeping it under wraps ahead of its expected reveal at their next Unpacked press conference.

While the Galaxy S10, S10+ and S10e have been plagued by leaks, there's still plenty we don't know about the Galaxy Fold. At this stage, there's only one thing that is confirmed: its size.

When used as a normal smartphone, the screen on the Galaxy Fold is said to offer 4.58-inches of screen space and a resolution of 840 x 1960 pixels. Meanwhile, the larger tablet-style screen offers a hefty 7.3-inches and a larger resolution of 1536 x 2152 pixels.

The form-factor is the biggest draw here. Like all foldable phones, the appeal of the Galaxy F is comes down to its ability to be used like a smartphone in some situations and like a tablet in others. It'll also probably look really futuristic and cool, though the quality of the software experience remains a big unknown.

[Related: Five Foldable Phones We Expect To See In 2019]

Pricing, or even a final name, for the Galaxy Fold hasn't been officially announced. However, we expect the foldable to surpass the hefty price of even the Galaxy S10+. Personally, we're expecting a price-tag of over $2000. However, we won't know for sure until Samsung Australia gives us the deets.

[Related: Rise of the Superphone]