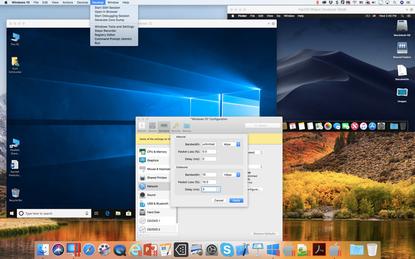 "With Parallels Desktop 14, we've taken those to the next level by focusing on graphics and storage, allowing customers to save as much as 20 GB of disk space while enjoying the best-ever performance. Personal productivity enhancements include more Windows features available on Mac devices. Touch Bar support for Windows applications - such as OneNote and Quicken - enables customers to add their favorite applications to the Mac Touch Bar so their shortcuts are at their fingertips."

As always, the new Parallels comes with a raft of technical improvements. Previously, a typical virtual machine can take up anywhere from 15GB to 100GB or more. Now, thanks to both a newly-engineered storage optimization process and a Free Up Disk Space tool, Snapshots in Parallels 14 take up 15% less disk space than they previously.

Other technical improvements include:

Like last year's Parallels 13, the new version of Parallels tries to blur the lines between Windows and Mac users. The software now allows Mac users to utilise Microsoft Ink and Windows-virtual machines to further utilise the Touch Bar found in the new Mac Books. This time around, Parallels have streamlined the customization process, empowering users to easily and quickly create their own unique Touch Bar shortcuts.

Support for 4K webcams has also been added.

If you already own a perpetual license for Parallels Desktop 12 or 13, you can also upgrade for a one-off payment of $71.45 or switch to a yearly Pro Edition subscription for $71.45 per year. You can find more information and download the latest version of Parallels via the official website.