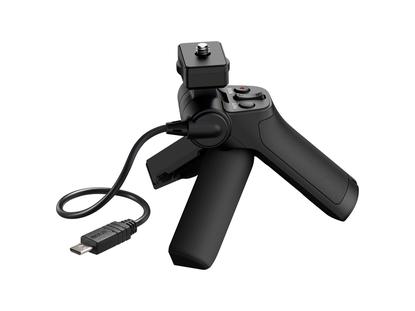 Sony has announced the VCT-SGR1, a versatile and compact new shooting grip best suited for their RX0 and RX100 series of cameras.

Said to be ideal for blogging, travel photography, self-portraits and more, the new VCT-SGR1 is a vertically-oriented shooting grip that attaches to Sony’s RX0 and RX100 series cameras via Multi/Micro USB Terminal.

It is said to be both compact and lightweight, and can adjust angles upwards of 70 degrees or down 100 degrees to capture different perspectives including high-angle shots, low-angle shots and self-portraits.

The grip also features several buttons at the top of the grip including shutter release, REC stop/start and zoom functionality, allowing for easy fingertip control for both right and left handed usage.

Additionally, the bottom of the grip can be spread out and used as a tripod, making it an ideal accessory for group photos or low light shooting conditions to avoid camera shake when shooting at lower shutter speeds.

The new VCT-SGR1 shooting grip will be available from July for $149.