We got so excited, we also did a partial teardown. 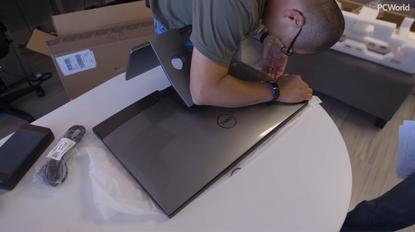 All-in-ones are fairly straightforward these days, but the new Dell Inspiron 27 7000’s exclusive use of Ryzen processors is sure to excite AMD fans. In fact, Dell’s gone all-in on AMD parts and offers Polaris-based Radeon RX GPUs as the sole option for graphics.

We just received our Inspiron 27 7775 and couldn’t wait to pop it out of the box. In fact, we were so eager, we even did a partial teardown and took a peek at what lies beneath the machine’s back plate. (Spoiler: It’s pretty tidy under there.)

Watch as we poke around and talk specs. We first saw this machine at Computex and have been eager to get our hands on it since then. With a choice of either a Ryzen 5 1400 or a Ryzen 7 1700 as the CPU, an RX 560 or RX 580 as the GPU, a FHD or 4K screen, and several configuration options for memory and storage, it looks like it’ll be a beast of an AIO. A beast that you can partially upgrade, at that.

How it’ll perform—especially with respect to noise output—remains to be seen, so stay tuned for our full review.