How to make and send selfie stickers in Google Allo

The latest update lets you create stickers in your likeness and send them to your friends. 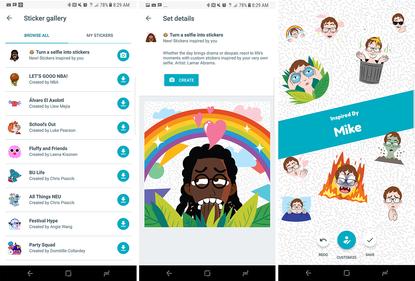 Allo hasn’t exactly been the runaway success that Google thought it would be, but that hasn’t stopped it from adding a steady stream of upgrades and new features. But with the latest new addition, some people might want to give it a second look.

With the new update rolling out to the Play Store, Google is introducing a long-rumored feature called selfie stickers. If you haven’t yet tried out Allo, stickers are central to its appeal, as Google looks to bring an Apple Messages-style whimsy to Android, adorning your conversations with everything from Star Wars to exercising avocados.

But selfie stickers add even more personality. Google is using neural networks here “to analyze the pixels of an image and algorithmically determine attribute values by looking at pixel values to measure color, shape, or texture.” Translation: They actually look like you.

To find the feature, start a new message with someone who has the Allo app installed and tap the emoji button in the message field. Swipe left to scroll past the default stickers and tap the overflow (three dots) menu. On the next screen, tap the smiling sticker icon at the far right of the selection window to bring up your sticker gallery.

At the top of the list should be a new option to turn a selfie into stickers. If you’re not seeing it, you can side-load the APK (see link below), but unlike other installs, I also had to clear the cache (Settings>Apps>Allo>Storage>Clear Cache) and quit the app. If you’re still not seeing it, you can force stop (Settings>Apps>Allo) see if that works.

When you tap the selfie sticker option, you’ll see a Create button. Tap that and you’ll enter a Snapchat-style selfie screen that lets you snap a photo (you can't use a prior selfie for your sticker). There are a pair of eyeglasses in the middle of the screen, so you’ll want to align your eyes with them.

Once you like what you see, tap the camera button and Google’s engine will begin to work its magic. The whole process takes about five seconds, and you’ll see a fun set of disguises to pass the time. Then you’ll be taken to a new screen with your selfie-inspired stickers.

From there, you can either save them to your gallery or customize your face for better accuracy. One thing to watch out for—if you’re wearing a hat in your selfie, the neural network will think you’re bald, so you’ll need to add hair in the customization panel (a turban and hijab are also options). But otherwise, the results are pretty spot-on. It even picked up my hazel eye color through my glasses.

In all, 24 stickers will be created featuring your mug in a variety of situations, including your face on a slice of pizza, as a zombie, if you were an abstract art painting, and sleeping.

They’re just as easy to use as they are to make, with the new sticker pack appearing at the top of the list when you go to use one. Just select the one that fits your mood and it will automatically send to your recipient.

The new update to Allo is rolling out to the Play Store, but you can also side-load the Google-signed APK from APKMirror. You may need to follow the instructions above to get the selfie sticker option to appear, however.