Asks for picture to be deleted from internet. Request is denied 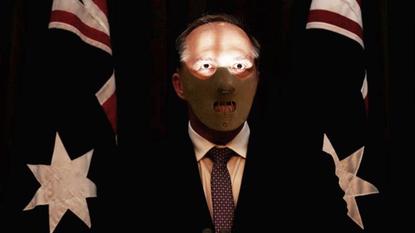 Australian Immigration Minister, Peter Dutton, asked journalists to remove a creepy photo taken of him from a press conference where he blamed refugee advocates for refugees inflicting self-harm in the "refugee camp" on Nauru. Cartoonist David Pope articulated the claims thusly, to great acclaim. The response from the internet at being asked to remove the unflattering picture was exactly what one would expect from the internet were it to ever be asked to remove an unflattering picture.

Here are the best examples from social media so far. File names denote the submitters. Most are lifted shamelessly from Reddit and can still be seen there if you can be arsed to go and click on them all individually. Any errors in attribution, please get in touch.

As a courtesy to the esteemed Minister, we have acquiesced to his wishes and not published the original image which upset him so much.