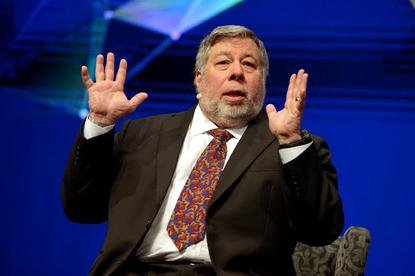 Steve Wozniak during his keynote at the 2015 Gartner Symposium/ITxpo at the Gold Coast.

“It was a magical experience... like Disneyland all the time.”

This is how Steve Wozniak described his experience driving his Tesla car on autopilot for two nights in a row.

The co-founder of Apple and chief scientist at Fusion-IO, said the car was making decisions on the road, and his hands need not be on the wheel. “It was just a wonderful feeling.”

“Self driving cars is the biggest technology for the future,” said Wozniak during his keynote at the Gartner Symposium/ITxpo at the Gold Coast.

“In the future, self driving cars will avoid problems humans make,” he said. They will have artificial intelligence. They will see speed limits, red lights and people walking across their path and even any kind of obstacles.

"In 20 years, no human drivers will be allowed except for the young kids at Disneyland."

Every person will have some form of self driving or self assisted cars in the next five years and this will have financial implications for insurance companies as there will be less accidents, he said.

But when asked about the security implications of these cars as the systems that run them can be hacked, he replied, “it could put the insurance industry back in business.”

On the question of software bugs in the car system, he responded by asking, 'what software product these days does not have a bug?' He said these will be covered by redundant systems.

“I think it is going to be overall very positive for the future (for self driving cars)," he said.

In 20 years, no human drivers will be allowed except for the young kids in Disneyland.

Drone deliveries is another trend he foresees will have more widespread use.

“I think it has got to happen,” he said.

He said he loved the thought of ordering a pizza late at night, through Amazon, and have it delivered to his doorstep in 15 minutes by a drone.

He believes this is going to happen as drones and the cameras they are equipped with “are getting better and better”.

What he is hoping is these drones, like the auto drive cars, will “become more intelligent” over time. The drone will know whether obstacles like trees are on the way and will go around these; or if something is going to hit it from behind.

As for the Apple watch, he said, “talking to my wrist is not magic. It is just wonderfully convenient.”

Asked about other technology companies he admired, he said companies like Google and Facebook have become important in our lives.

He said he has “plus and minus” views on Google, but in terms of artificial intelligence, on building computers to think like a person that has a brain, Google has a headstart and is hiring the right people to head these programs.

He also sees cyber security as one of the most important technology issues today.

“It comes out in almost every conference I am at,” he said, expressing concern about the disruption caused by the amount of data stolen and exposed.

Another technology area that concerns him is the fact that that everything "is now being monitored".

“Every purchase you make, every place you go, your face is being recognised, every keystroke you type on your computer, somebody could be looking at your computer at what you are doing."

“It bothers me…I am very much on the side of civil liberties and protecting privacy,” he said, adding that he is one of the founders of the US Electronic Frontier Foundation that advocates for these rights.

“Humans should be much more important than technology,” he said. “But we lost the battle to machines 200 years ago. We will always fire a human but not fire a machine that makes our cheap clothing.”

He also shared views on how organisations should tackle disruption.

"Entire industries are disrupted or shaken, but never right away," he observed. "It is important to notice the changes early in advance."

He cited Blackberry and Nokia which were profitable for many years before their market shares were taken by other brands.

Companies “need to keep the wheels turning” for operations or products that bring in revenues.

“Meanwhile, let us try to innovate try new things to enhance our business,” he stated.

Companies that have enough revenue can hire another officer – the ‘chief disruption officer’.

“Their role is to say, what would disrupt our business, what can we do to disrupt others in business?”

“You may see a future going on different directions, so start up little companies on the side, work on these new directions that might even be disruptive to your own business.”

Sign up for CIO newsletters for regular updates on CIO news, views and events.

Join the CIO New Zealand group on LinkedIn. The group is open to CIOs, IT Directors, COOs, CTOs and senior IT managers.