Amazon and Google aren't the only ones with a delivery drone

An electric truck maker from Ohio is in on the action 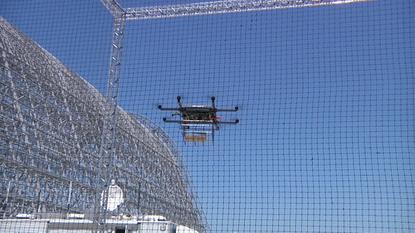 A delivery drone from Workhorse during a demonstration at Moffett Field in Mountain View, California, on July 28, 2015.

In the race to develop a drone that delivers packages, don't count out Workhorse, a truck maker based in Loveland, Ohio.

Workhorse isn't as high profile as Amazon or Google, but on Tuesday it demonstrated an eight-rotor delivery drone designed to work with its electric trucks and utilize some of the same battery technology.

"Our concept is, you have a package-delivery drone that rides on top of a truck as the driver goes about his day, and helps to pick off outliers on his route to help cut down on the cost of delivery per package," said Elliot Bokeno, a mechanical engineer with Workhorse, who demonstrated the drone at a conference at NASA's Ames Research Center in Silicon Valley.

So, if a driver had four deliveries in one part of town but only one in another, the drone might be able to handle that single, less convenient delivery.

GPS is used to determine the delivery location, and the drone flies there without any human input, Bokeno said. But when it gets to the address, a downward-pointing camera switches on and an operator at a remote center takes over.

The operator guides the drone down, making sure to avoid people and obstacles, and releases the package. The drone then resumes autonomous flight and makes its way back to the truck.

In tests, the drone has flown as fast at 55 miles per hour and has a maximum flight time of 30 minutes. The company is working with Panasonic, which provides batteries for Workhorse's electric vehicles, on more advanced battery technology that will increase flight times to 45 minutes.

Bokeno said his company has already talked to several package delivery companies about using its technology.

"It seems that Amazon, with their drones, have kick-started a revolution and some of the more traditional companies are scrambling to keep up," he said.

There are other potential uses for the technology.

"With a 10 pound payload, you have a lot of scientific interest for carrying instruments to remote locations," he said.

For now, tests of the technology over relatively short distances continue. Workhorse is collaborating with the University of Cincinnati and hopes to begin multi-mile delivery tests soon.