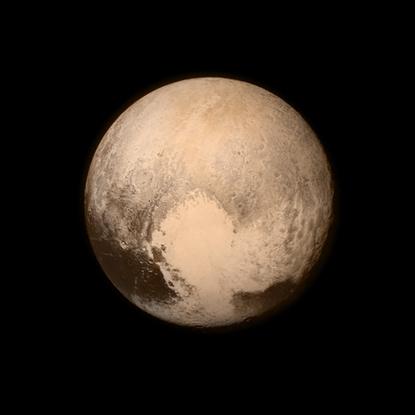 Pluto nearly fills the frame in this image from the Long Range Reconnaissance Imager (LORRI) aboard NASA’s New Horizons spacecraft, taken on July 13, 2015, when the spacecraft was 476,000 miles (768,000 kilometers) from the surface.

NASA's New Horizons spacecraft is delivering amazing images of Pluto, but receiving them from 3 billion miles (4.8 billion kilometers) away is no easy feat.

The strength of the radio signals, the time it takes the signal to travel back and forth and the speed of the data flow all present challenges, but it's all in a day's work for NASA's Deep Space Network. Think of it as the long-distance phone company for the solar system and beyond.

The DSN consists of a network of huge satellite dishes spread across three sites -- near Barstow in California; near Madrid in Spain; and near Canberra in Australia. Those locations are about 120 degrees in longitude apart to give wide coverage of the skies, so before a spacecraft is lost by one antenna, another one can pick it up.

The sensitive antennas work alone or in groups and communicate with about 30 space probes each month, said Jeff Osman, contact technical manager for the Deep Space Network, in an interview.

For New Horizons, the first images of its closest Pluto fly-by will be received by 70-meter antennas at the Madrid and Barstow sites, he said.

Data is coming down at a speed of approximately 1200 bits per second -- about as fast as a dial-up Internet modem in the early Nineties -- and it takes 4.5 hours for the signal to travel the distance from New Horizons to Earth.

This slow speed, coupled with the mission's science needs, which mean the spacecraft is not always pointing towards Earth, explains why the images from the closest point of the fly-by won't be received on Earth until more than a day after they were taken. It also explains why video from the edge of the solar system won't be possible any time soon.

In the most crucial phase of the Pluto fly-by on Monday evening, during a series of radio experiments, the Deep Space Network had six dishes pointed toward New Horizons. Some acted as back-ups in case of problems sending command signals to the craft, which travel away from Earth at the even slower rate of 500bps.

The Deep Space Network isn't confined to NASA craft. Because of its sensitivity, it also plays a supporting role to international missions, such as those launched by the European Space Agency and Japan's space agency.

At any one time, the DSN is talking to between 12 and 15 craft. A real-time view of this setup can be found on the Web at DSN Now. The page details which antenna is talking to which space probe, and even the data rate and frequency in use.

Most spacecraft use a portion of the X-band at 8.4-8.5GHz, which is set aside globally for deep space communications. Because the signals coming back to Earth are so weak, agencies like NASA need a dedicated frequency band to avoid interference from terrestrial sources. Noise is also part of the reason space agencies are now eyeing even higher frequencies, around 32GHz, for future generations of craft.

If you keep a watch on the DSN Now page, you might see the DSN in communication with Voyager 1. That craft launched in 1977 and is now 25 billion miles from our planet -- the farthest a man-made object has ever traveled.

That's about a 36-hour radio round trip.

"We send a signal to Voyager one day, and we come in the next day for the answer," Osman said.