But the proposal does not go far enough, say privacy organizations and industry lobby groups 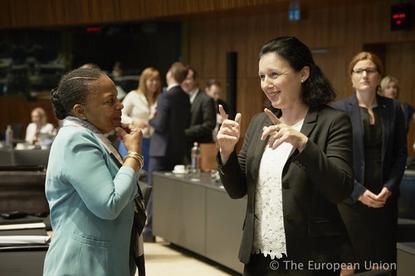 Christiane Taubira, French Minister for Justice (left); Věra Jourová, European Commissioner for Justice, Consumers and Gender Equality (right), during a meeting of the Council of the European Union in Luxembourg on June 15, 2015

The EU Council has issued a long-awaited, hotly debated plan for online privacy, moving the EU's reform of data-protection laws closer to reality.

The Council says that the plan will give people more control over their personal data, but privacy groups say the proposal actually weakens privacy safeguards.

Data protection reform is important for European citizens, tech companies and any business processing personal data in the EU. Current data protection rules stem from a 1995 law and urgently need an update for an era in which cloud computing, smartphones and high-speed Internet access are common.

The Council plan revealed on Monday requires, among other things, that companies get unambiguous consent from individuals in order to be allowed to process personal data. Companies will also be obliged to implement appropriate security measures to protect personal data and notify affected people when breaches occur.

Under the plan, individuals will also get the right to sue companies for breaking data protection rules. Currently, people can only sue the company that collected the personal data but the EU wants to make it possible to also bring a lawsuit against cloud providers that are hit by breaches.

The European Commission, the EU's executive branch, three years ago issued the original proposal for a new data-protection law, which the European Parliament, one of the EU's legislative bodies, adopted with slight changes in March last year. The Council of the EU, where national ministers from each EU country meet to adopt laws and coordinate policies, is proposing further changes. It is scheduled to negotiate details of the final data-protection reform plan with the Commission and Parliament.

The plan as set forth by the Council, however, does not go far enough, according to European consumer organization BEUC. It should be possible for victims of large scale data breaches to collectively file claims against companies, said BEUC spokesman John Phelan. "That is something that the Parliament very strongly and very clearly recommended," he said.

There are also questions about how much control people will have over their data, Phelan said. Under the Council proposal, companies processing data are allowed to share data with a third party if there is a "legitimate interest." That phrase is too vague, Phelan said, adding that there should be a clear definition of what qualifies as a legitimate interest.

The legitimate interest rule was also criticized by digital civil liberties groups EDRi and Privacy International. In a news release, they said the vague wording of the plan will offer a lot of scope for businesses to process data.

Privacy International and EDRi also pointed out that health data will be at risk. "The Council proposals would allow further processing of health data, including genetic data on a massive scale; indefinite retention of health data including genetic data such as whole genomes without people's knowledge or consent; and sharing of this data with third parties, including companies such as Google, without people's knowledge or consent," the organizations said. Though names would be stripped from the data that is being processed, it will be done in a way that allows results to be reconnected to individuals later on, the organizations said.

Tech companies are also unhappy with the Council's plan. Data-protection reform is supposed to put in place a "one-stop-shop" mechanism that would make it easier for businesses and citizens across the EU to deal with privacy-related complaints.

The original proposal for a one-stop-shop mechanism gave international companies one Data Protection Authority to deal with, rather than multiple national regulators. However, critics have said that by adding unnecessary steps, the Council has made that part of the data-protection plan vastly more bureaucratic then it needs to be.

"This is not the one stop shop we were hoping for, because it allows for parallel proceedings in different EU countries. It needs more work," said John Higgins, director general of DigitalEurope, which represents companies including Google, Apple and Cisco.

There are months of negotiations ahead before a final data protection package becomes law. The Council, Commission and Parliament need to reach a compromise agreement on a final plan. Luxembourg, which will lead the Council of the EU for six months from July 1, intends to close the negotiations before the end of the year.

The lead member of the European Parliament on data protection regulation, Jan Philipp Albrecht, is hopeful that a compromise can be reached by the end of the year.

"There are clearly differences, notably on consumer rights and the duties of businesses," Albrecht, a German Green Party member, said in a press release. "However, if we can negotiate constructively and pragmatically, it should be possible to deliver a compromise acceptable to both sides within the timeframe."

Loek is Amsterdam Correspondent and covers online privacy, intellectual property, online payment issues as well as EU technology policy and regulation for the IDG News Service. Follow him on Twitter at @loekessers or email tips and comments to loek_essers@idg.com