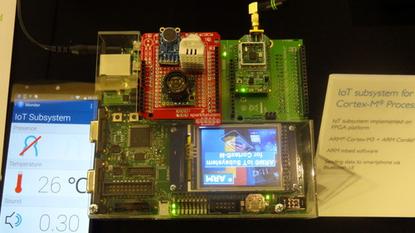 ARM is trying to resolve the thorny problem of battery life in Internet of Things devices with a new chip design that will significantly reduce the power consumed by processors, sensors and wireless chips.

The company has overhauled the way it designs low-power Cortex-M chips that go into IoT devices such as health monitors, smart home devices and sensors. The restructured design could almost double battery life, ARM executives said at Computex in Taipei on Monday.

For example, the battery life of a connected hearing aid could more than double with chips based on the new design, said Jeff Chu, director of marketing at ARM.

Chu provided another example of a smart lightbulb lasting a lot longer on a battery charge with new chips based on the design. The smart bulb could have solar cells to refresh the battery, and the chip's lower power consumption could help the battery last for years.

The restructured Cortex-M also boasts support for a new Bluetooth 4.2 radio called Cordio, and has a new memory subsystem that will enable faster exchange of data between components. Additionally, a wide range of sensors can be applied to the chips.

ARM showed chips based on the new design at a news conference at Computex. A developer board with the Cordio-based Bluetooth chip was able to measure ambient temperature and transmit the readings to a smartphone.

The company intends to add more wireless connectivity options to its IoT chip designs too, Patel said. It hopes to add support for the 802.15.4 standard, which is the basis for Zigbee, a low-power wireless data transfer protocol that competes with Bluetooth.

With the redesign, ARM is also trying to speed up the development of chips for IoT devices, which could number more than 50 billion by 2020, said Dipesh Patel, executive vice president of technical operations at ARM.

ARM designed the new development platform to work with its mbed OS for the Internet of Things. A wine rack on display at the news conference used the Raspberry Pi and mbed OS to check the inventory and temperature of a wine rack, with the information transmitted to apps on mobile devices via the Amazon cloud service.