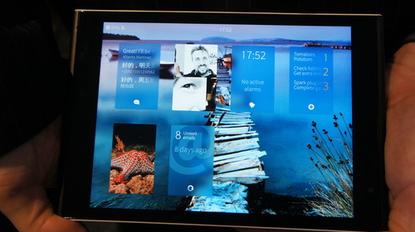 Finnish companies Jolla and SSH Communications Security are counting on their European origins to help sell a secure mobile operating system they are co-developing.

The need for more secure mobile communications has been apparent ever since former U.S. government contractor Edward Snowden made his revelations about National Security Agency (NSA) snooping.

SSH is best known for the Secure Shell encrypted communications protocol invented by the company's founder Tatu Ylönen. Jolla, founded in 2011 by a group of former Nokia employees, sells a smartphone running its open Sailfish OS, and will start shipping its first tablet running the OS next quarter.

Their secure OS will be based on a hardened version of Sailfish, and use SSH's encryption and key management platform, the companies announced at Mobile World Congress on Monday. They offered few details of the OS's functionality and development schedule, but expect development work to be made much easier by Sailfish's Linux roots, according to Mika Lauhde, vice president of government relations and business development at SSH.

The resulting products will be aimed at government officials and corporations that need secure mobile devices and communication. But the goal is also to make the products affordable enough for consumers, the companies said.

An important part of Jolla's pitch is that it isn't a big U.S. vendor building an ecosystem to lock users in. The company has also taken a pro-privacy stance, and said that it isn't selling its customer data to third parties.

Jolla and SSH weren't the only two European companies talking about secure smartphones at Mobile World Congress. Swiss company Silent Circle, which makes the BlackPhone, plans to launch a new smartphone and tablet along with enterprise messaging software later this year, it announced. The company's devices run PrivatOS, which is based on a hardened version of Android.

Silent Circle cited a string of high-profile attacks, including last year's hack of Sony Pictures Entertainment, as reason why companies should start using its products and services.