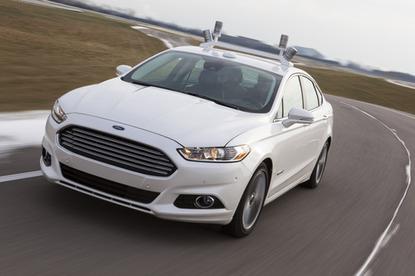 Ford announced Wednesday that it hopes that researchers at MIT can come up with advanced algorithms to help the vehicle learn to predict where other vehicles and pedestrians could be in the future.

Ford is enlisting top U.S. universities to make self-driving cars a reality, announcing Wednesday that it hopes researchers at the Massachusetts Institute of Technology can come up with advanced algorithms to help vehicles learn where pedestrians and other automobiles will be located.

"We're using data from the sensors both on board and off board," said Jonathan How, director of the MIT-Ford Alliance and a professor of aeronautics at MIT. He said that the system isn't just using the car's Lidar system, which captures a 3D view of its surroundings using spinning cameras, but crosswalk signs and traffic lights.

See a demonstration of self-driving cars in a video on YouTube.

If the car knows whether a traffic light is red or green or whether a crosswalk sign is illuminated, it will have even more information than what is collected by the car's sensors. It might also be able to avoid an accident with a car that runs a red light.

"Having the sensors work in all conditions are issues that are fundamental to the problem," he said. How the sensors need to work in daylight, darkness, snow, rain and other weather conditions with the same reliability.

While the ultimate goal is to have an automated, driverless car, MIT is taking smaller steps to get towards the goal. How and his team of students are working to bring autonomous shuttles to MIT campus in Cambridge. He said he hopes to have golf-cart size prototypes on campus later this year, moving to something more permanent in the future. He said that the vehicles would have "safety drivers" just in case.

"The goal is to basically have a mobility on demand system," he said. Within two years, How imagines that all of the university's campus would be covered and students could order shuttles using an application on their smartphones.

On the west coast, Stanford University researchers are tasked with helping cars see around obstacles. For example, when a vehicle is blocked by a large truck, it would be able to maneuver inside the lane to see what is beyond the obstruction. It would be able to take actions based on what it learns. Maybe it would wait for the obstruction to clear or it might determine that it is safe to pass the truck.

Automated driving is part of what Ford calls its Blueprint for Mobility, which attempts to imagine the roads in 2025 and beyond. The company said that it is exploring all of the different components of automated driving including both the technological and legal hurdles.