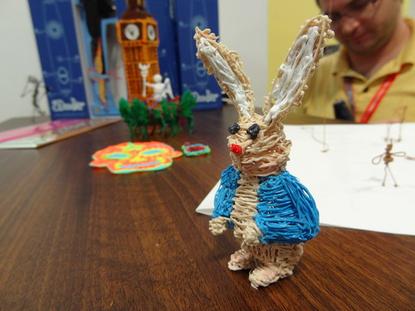 A object made with the 3Doodler at the IFA consumer electronics show in Berlin. The gadget is on presale for US$99.

The 3Doodler, a sort of handheld 3D modeller, made its public debut at the IFA consumer electronics show in Berlin this week after racking up thousands of preorders as part of a Kickstarter program.

The gadget extrudes heated plastic, similar to an electric glue gun, that allows users to make a variety of objects. The company plans to offer stencils on its website for beginner users to make everything from the Eiffel Tower to a horse-drawn carriage.

See the 3Doodler in action in a video on YouTube.

During its Kickstarter program, which launched in February, the company raised $US2.34 million and presold 26,000 pens.

"Since then we've had our heads down making these pens and we're here at IFA for the first time showing it in public," said Daniel Cowen co-founder of 3Doodler.

Kickstarter is a website that allows entrepreneurs to crowd source funding for various projects and ideas.

The device uses two different types of plastic sticks, purchased separately, and each has a speciality. ABS, or acrylonitrile butadiene styrene, plastic is good for drawing upwards, creating bendable art or "doodling" on paper and then peeling it off. PLA, or polyactic acid, plastic is better for making acute angles or drawing on glass or metallic surfaces.

The pen will be available for $US99 and is on presale on the company's website. First the Kickstarter orders will ship, then the presale ones and finally general sale purchases will ship. Cowen said he hopes to be in retail stores by early next year.