Kickstarter open to AU/NZ projects in "very near future"

Crowdfunding website Kickstarter.com announces it will begin accepting Australian and NZ projects in the "very near future". 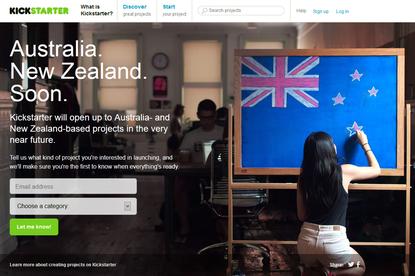 Crowdfunding website Kickstarter.com has announced it "will open up to Australia- and New Zealand-based projects in the very near future", and that it will run "Kickstarter School" events for interested contributors in Sydney and Melbourne next week.

The well-known website has not accepted projects from either country previously, though competitors such as the global Indiegogo or New Zealand-based PlegeMe have provided alternatives to Australasian entrepreneurs.

Via a page on its website, Kickstarter offers a place for interested Australians and New Zealanders to supply an email address and select the "kind of project you're interested in launching" from a drop-down box, promising "we'll make sure you're the first to know when everything's ready".

No date has been specified.

Events with Kickstarter product manager Leland Rechis are being held in Australia, offering a primer on using the service. The Sydney event is on Sunday 1 September (10:00am-12:00pm), and 43 tickets remained at the time of writing. The Melbourne event is Monday 2 September, 6:00pm-8:00pm, and the final 30 tickets sold out whilst this article was being written.

No events have been advertised for New Zealand.