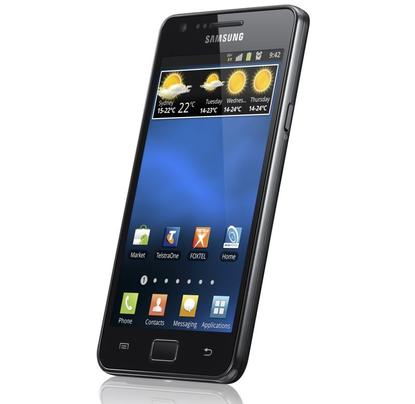 Samsung's Galaxy S II is the best handset to run Google's Android operating system so far. It may even be the best smartphone on the market. In Australia, it will be sold by both Telstra and Optus.

Perhaps the best thing about the Galaxy S II smartphone is its display: A 4.3in Super AMOLED Plus screen. It delivers amazing colours and is extremely bright. At 3.5in, the screen of the iPhone 4 looks tiny by comparison. However, the iPhone 4's display has a higher resolution: 960x640 versus 800x480.

The handset runs version 2.3 of Android — AKA Gingerbread. Samsung has also installed version 4.0 of its TouchWIZ interface, which offers a range of widgets and UI tweaks. There are also four special 'hubs': Social, Reader's, Game and Music.

Under the hood is a 1.2GHz CPU. It's a dual-core processor and it makes the phone extremely fast. During our tests it seemed much faster than the iPhone 4 when performing tasks such as loading Web pages. Because it runs Android, the handset is capable of displaying Flash.

It's is a quad-band 3G smartphone, so it will operate on all mobile networks in Australia, including Next G. It's capable of blazingly fast 21Mbps downloads, though you are unlikely to reach this speed in the real world.

The Samsung Galaxy S II is one of the best Android phones on the market when it comes to battery life. With moderate use, the Galaxy S II will easily last over a full day, and may even stretch up to one and a half days. During extreme use though, we found the Galaxy S II managed to last a maximum of about 14 hours. The display is the main cause of battery drain, often accounting for over 40 per cent of power usage, while Wi-Fi is also a big power user.

If you're looking to buy a smartphone, the Samsung Galaxy S II should be near the top of your list. If you're after an Android handset, it almost certainly should be at the top.