In 2020, we called AMD's Ryzen 5000 the best consumer CPU we've ever seen, and that excellence carried over to Ryzen 5000 laptops. Now, AMD is adapting the chips for Chromebooks with four new Ryzen 5000 C-Series processors, including the first 8-core X86 Chromebook chip.

The new processors promise massive performance gains over AMD's first Chromebook lineup, the Ryzen 3000 C-series, which debuted in 2020. AMD says the new Ryzen 5000 C-Series CPUs are up to 107 percent faster running the GeekBench benchmark, for example. Two new Chromebooks will tap their power: the Acer Chromebook Spin 514, scheduled for the third quarter, plus the HP Elite C645 G2 Chromebook, which will ship in the second quarter.

AMD is bringing its new processors to market at an interesting time. First quarter PC sales data from Gartner (which includes Chromebook sales in its reports) showed that worldwide PC shipments dropped 6.8 percent during the first quarter of 2022, primarily because the sharp growth in Chromebooks that occurred over the pandemic hasn't been repeated in early 2022. In 2020 and 2021, Chromebook sales soared as students snapped up Chromebooks for working at home, while the parents who purchased them didn't want to break the bank.

Now, people are returning to work, but also finding that they love working from home. In its latest report, Gartner found that business PCs were in high demand, so these new Chromebooks might be said to tap that trend. Robert Hallock, the director of technical marketing for AMD, said in a presentation to reporters that more work is being done in the cloud, with an emphasis on sharing and video calls — making the Ryzen 5000 C-series chip more attractive.

From a performance standpoint, there's no question that AMD's Ryzen 5000 C-series chips can deliver the goods. AMD announced four C-series parts, including the first 8-core X86 processor for Chromebooks, the Ryzen 7 5825C. Three other chips were announced: the 6-core Ryzen 5 5625C, the 4-core Ryzen 3 5425C, and the 2-core Ryzen 3 5125C. 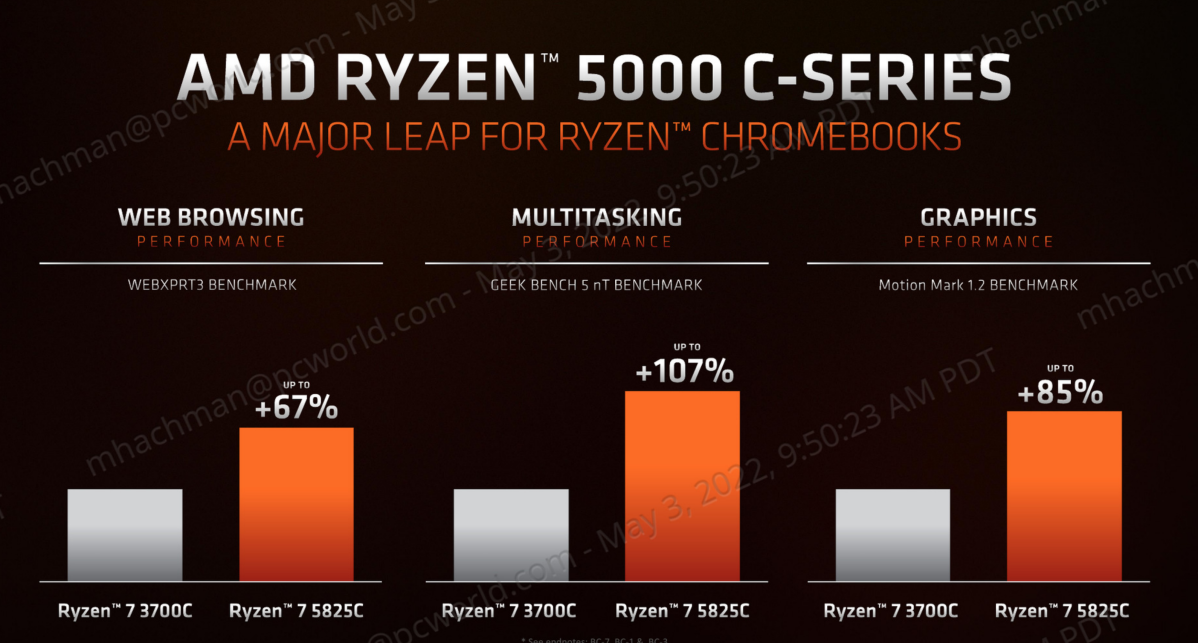 AMD claims that its new Ryzen 5000 C-Series chips will offer substantial performance improvements over its own, older processors…

The new chips will form the premium tier of AMD's Chromebook lineup, with the Ryzen 3000 C-series chips beneath them. The distinctions between the two families are sharp: the Ryzen 7 5825C outperforms the Ryzen 7 3700C by 67 percent in WebXPRT3, 107 percent in GeekBench's multithread benchmark, and by 85 percent in MotionMark 1.2, a graphics benchmark. AMD didn't disclose the graphics capabilities of the Ryzen 5000 series at launch, but the new 5000 C-series chips will have between 3 and 8 GPU cores, the company says. If AMD's standard mobile lineups are any indication, the more powerful chips should come with more graphics cores.

All of the new 5000 C-series chips consume 15W, like their PC cousins, which Hallock claimed will help the two new Chromebooks achieve up to 13 hours of battery life. 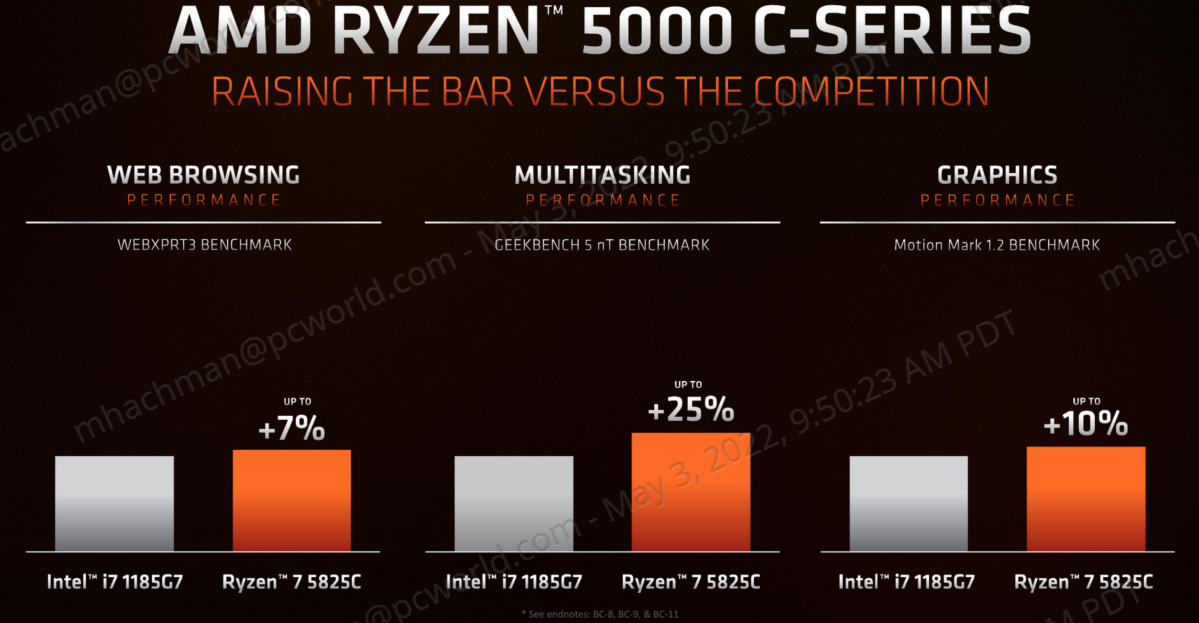 …as well as the competition.

HP's Elite C645 G2 will be a 14-inch clamshell Chromebook with options up to a Ryzen 7 5825C, AMD said. Features will include Wi-Fi 6E, Bluetooth 5.2, and optional 4G LTE. A 5 megapixel webcam, plus a smartcard reader and fingerprint sensor will also appear.

Acer's Chromebook Spin 514 will instead be a 14-inch two-in-one convertible, also with options up to a Ryzen 7 5825C as well. AMD and Acer are saying that the Chromebook will include up to 256GB PCIe Gen 3 SSD storage, with Bluetooth 5.2 and Wi-Fi 6 alongside. The MIL-STD 810H-rated Spin will also feature a Gorilla Glass touchscreen, protecting a 100 percent sRGB display.