Intel has been hyping up its entry into the incredibly competitive discrete GPU market for a couple of years. But for something so highly anticipated, the actual debut of Intel Arc graphics is underwhelming. The debut laptop designs are now showing up in the United States, priced much higher than their GPU performance probably justifies.

Tom's Hardware reports that the first two models of laptop with the shiny new Arc A370M GPU are now available to buy. The Asus Zenbook Flip and HP Spectre are both 2-in-1 designs in the 15-inch range, priced at US$1400 and US$2000, respectively. Both come with a 12th-gen Core i7, 16GB of memory, and 1TB of SSD storage, Evo-standard features like Wi-Fi 6 and Thunderbolt 4, and a host of other goodies. The HP has a trendy 3×2 screen, while Asus steps it up with an OLED panel.

In a vacuum, these machines don't seem so bad, especially since they're sporting Intel's swanky Evo certification, which ensures some killer features in premium machines. Sure, two grand for an HP 2-in-1 is a lot, but you've got that discrete graphics card making it a sort-of gaming design, right? Don't get your hopes up. When Intel finally pulled the cover off of the Arc GPU series last month, it said that the A370M would arrive in laptops starting at $899. These initial landings are hardly the focus on affordable laptops that was indicated. 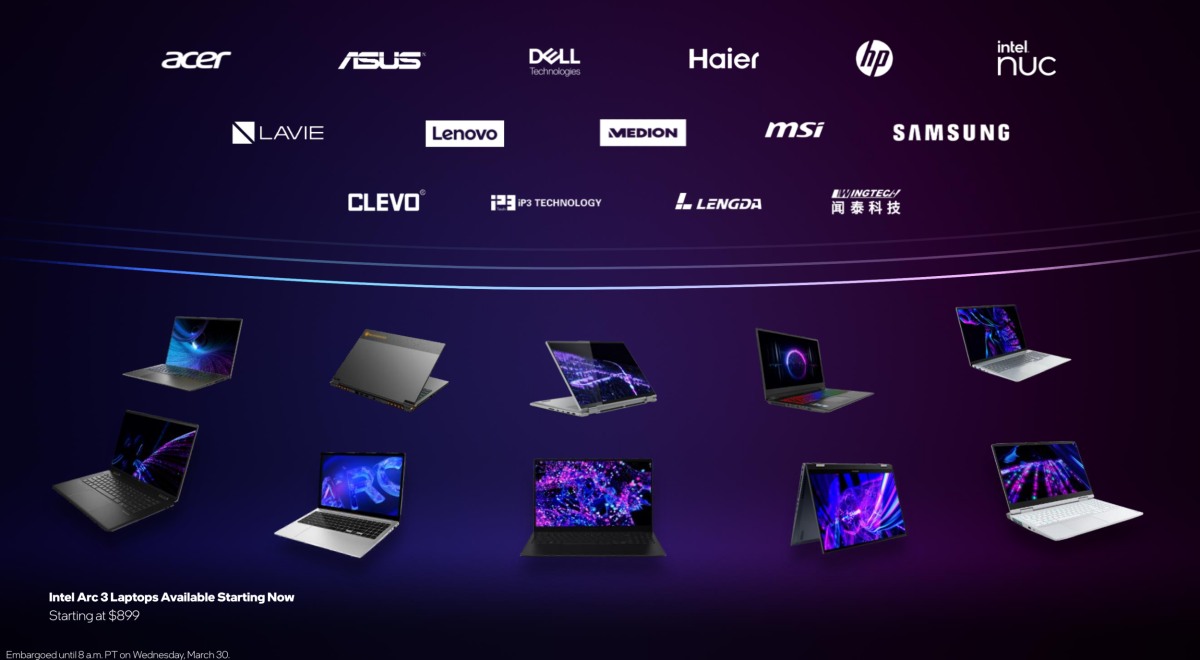 It's also hard to justify in terms of performance. Intel hasn't officially sent out any review units (itself showing a pretty concerning lack of confidence), but AMD has posted benchmarks comparing the A370M GPU in these two laptops to its entry-level 6500M notebook card. Depending on the test, it's approximately 20-50 percent slower than Intel's offering. Not surprising, perhaps, since Intel is just getting started. To be fair, Intel's Arc offers some compelling-looking features for content creators, such as AV1 encoding and intriguing Deep Link capabilities that put both the discrete and integrated graphics in a laptop to work simultaneously, but since Intel hasn't sent our review laptops and these new HP and Asus laptops are the first Arc notebooks to land stateside, we can't speak to their effectiveness.

But that's not the kind of gaming performance you drop US$2000 on, or even US$1400. If you want discrete graphics, that much money can get you a laptop with a new RTX 3070 or RX 6800M, which will absolutely smoke these new Arc designs even if they're not as svelte. The slickly designed Asus ROG Zephyrus G14 costs roughly as much, weighs under 4 pounds, and will blow the Arc A370M's gaming performance out of the water, for example.

And that's not mentioning the new generation of AMD integrated graphics. Based on our initial testing of Ryzen 6000-series RDNA2 graphics, the first wave of Arc laptops could even be worse at gaming than some competing laptops with integrated GPUs.

In short, it's a poor start for Intel Arc, in terms of both performance and value. While Arc should certainly have a dramatic advantage over Intel's own Xe integrated graphics, these laptops are too expensive for the budget-minded and likely too underpowered for those who are buying for gaming or media capabilities (though Arc needs to be independently benchmarked before we say that for certain). Budget Arc laptops need to arrive quickly, or prices on these existing designs need to drop dramatically, in order for Intel's debut discrete graphics effort to be competitive.